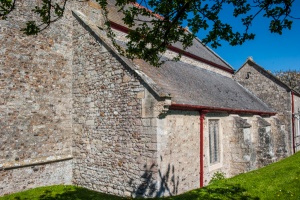 St Michael's from the churchyard

Set beneath the Iron Age hillfort of Hawksdown stands the 12th-century church of St Michael. The first church we know of was built around AD 1140, though it seems very likely that there was a place of worship at Axmouth before the Norman Conquest - though not necessarily in the same spot.

The most obvious surviving feature of the Norman church is the beautifully carved north doorway. In the tympanum area is a 17th-century inscription, but do not be fooled; the doorway itself is pure Norman. The lower sections of the nave and chancel also date to the 12th century, with the south aisle being slightly later. The south aisle had to be rebuilt around AD 1300, when the huge nave pillars were strengthened.

The tower rises 56 feet, with a turret on its north side. The tower clock was inserted to mark Queen Victoria's Diamond Jubilee in 1897.The first tower was built in the south east corner, but rebuilt at the west end of the nave in the 15th century. 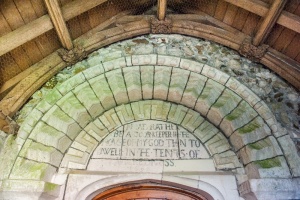 By far the most interesting historic feature is a pair of medieval wall paintings on two of the south nave pillars. The paintings were hidden for many years under layers of whitewash, but came to light during remodelling work in 1889.

Experts seem unclear as to exactly when the paintings were created, estimates ranging from 1300 to 1500. Information panels within the church put the date at around 1400, but a recent examination suggests a date around 1480.

One painting depicts Christ of Pity, or Christ displaying his wounds after the Resurrection. The style shows Italian influence, which is rare for an English country church. The other painting shows St Peter (or possibly St Michael) and the Madonna.

On the south wall of the aisle is a fragment of medieval painting showing a martyr being tortured. If you look closely you can see what looks like the figure of a Bishop with a spindle above him and winding mechanism at one side.

A recent interpretation of the painting by an art historian from the Victoria and Albert Museum has identified the martyr as St Erasmus (also known as St Elmo), a Bishop of Formia killed by the Romans around AD 300. The same historian has placed the date of the painting between 1480-1500.

The paintings are worn in places, and have lost some of their colour, but the stained glass east window contains depictions of the designs which make the paintings very clear. 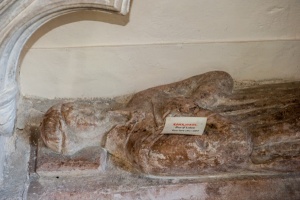 14th-century effigy of a priest

In the chancel is a worn 14th-century effigy of a priest in vestments. The most impressive monument was erected in 1747 to Richard Hallett of Stedcombe. The Halletts were lords of the manor of Axmouth. In the south chapel is a monument to Dame Anna Erle and her son Thomas, dated to 1650, and i the south aisle is a memorial to Gulielmi Serle dated 1726.

Another interesting feature is a medieval hagioscope, or squint, allowing worshippers in the Bindon Chapel to see the high altar. Beside the altar is a medieval piscina, set under a late Victorian window dedicated to the Bindon family.

St Michael's is a delightful church, in a very pretty village. As far as we know it is usually open daylight hours. My only word of warning is that there is no sidewalk in front of the church gate, and traffic along the B3172 can be quite busy, so please take care! 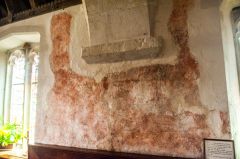