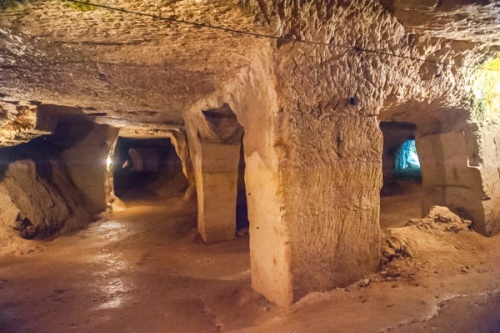 Beer stone has been a prized material for buildings since the Roman era. Two thousand years of quarrying has created a fascinating cave system delving deep into the earth just outside the village of Beer, which gives its name to the stone.

The first Romans to arrive on the Devon coast must have noticed the limestone cliffs near the estuary of the River Axe. The Romans quickly recognised that the cliffs contained exposed veins of a finely-grained limestone. They began to quarry the stone wherever a vein could be found near the surface. 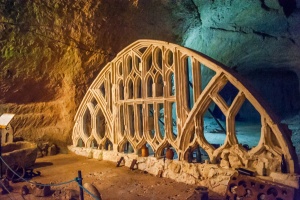 After the surface stone had been quarried they had to dig deeper into the earth, inland from the cliffs, in search of more stone, which they extracted with picks and wooden wedges. The Roman sections of the caves are distinguished by their wide arches.

They used the stone for important public buildings, and local villas such as the one at Honeyditches, near Seaton. The stone was carried to the river estuary, where it was loaded onto boats for shipment.

Quarrying continued after the Romans left, following the limestone seams underground. We know the Saxons quarried here, fr at Colyton church you can see a magnificent Celtic cross made of Beer stone. The Saxon workings are easily characterised by sharp, squared corners, unlike the earlier rounded Roman workings.

The Normans extended the Roman tunnels, and their work is distinguished by rectangular columns supporting the cave roof. They also carved out several small side-tunnels, exploring the limits of the limestone veins. 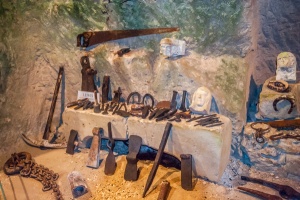 Unquarried pillars of stone rise like cathedral columns, many with capitals like you would see in a church. The church analogy is apt, for the Norman section of the caves looks like a gigantic church, with nave pillars and side aisles.

During the medieval period mining tools improved, but it was still a hard life. Miners worked by candlelight, using hand picks and saws. The quarrymen, often aided by child labourers, cut the stone free of the cave walls.

Since the stone quickly hardened when exposed to air, it was worked by skilled stonemasons as soon as possible. The masons worked inside the caves, where the relatively constant temperature meant the stone was not subject to damage from frost or changeable weather.

The stone blocks were lifted by hand cranes onto wagons, which could then be pulled by horses to Beer beach where they were loaded into ships. In theory children under 14 were not allowed to work underground, but children as young as eight years old were used to take candles to men at the workface and to feed the horses while underground.

Miners were expected to produce a four-ton block of stone daily, working by the candlelight. Each man was allowed just 5 candles per day, and they had to by purchase the candles themselves. At the end of each day's work the stone block would be struck with a tap-stone hammer. If it made a satisfying clear sound the stone was passed as good and they would get paid.

Ah, but if the stone gave a dull thud when tapped it indicated a crack, and the quarryman would not be paid. So a man could work all day in almost total darkness, and not only not get paid, but be out of pocket because had to buy his own candles. This gave rise to the expression of something being 'not worth a candle'. 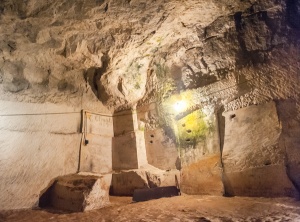 By contrast to the poor quarrymen the stonemasons were relatively well paid, and they did not have to but their own candles. The masons jealously guarded their trader secrets and many were part of what was essentially a trade union, the Freemasons.

The Dissolution of the Monasteries under Henry VIII and the changes wrought by the Reformation meant that the market for Beer stone dried up; there were fewer churches and monastic buildings being built. The quarry continued to be worked, supplying stones for secular buildings, but the quarry never regained its former importance.

During the religious turmoil of the Reformation, the caves were used for secret Catholic worship. You can see a stone chamber used as a chapel by Catholic worshippers. The caves also made a perfect hiding place for smugglers to hide contraband goods during the 19th century.

During the Victorian period there was a resurgence in church building and rebuilding of older churches. This led to a surge in demand for Beer stone. Demand remained high throughout the 19th century, but gradually dwindled in the early 20th century.

Beer stone was worked until the 1920s, then the caves were used to grow mushrooms, and to store rubble from other nearby quarries. 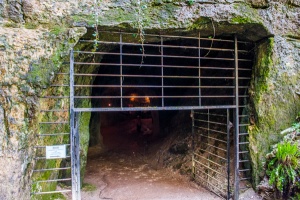 Beer stone is easy to work and has a soft golden colour after it has been exposed to the air. It is easy to cut but hardens after it is exposed to air. It is a 'freestone', meaning it can safely be cut in any direction. The stone was used in over 20 cathedrals in England, including Exeter Cathedral, Westminster Abbey, and St Paul's Cathedral, and other major building projects such as Buckfast Abbey, Rochester Castle and Windsor Castle.

The cave system is home to a large bat population, especially in the winter months. The largest numbers of bats are Greater and Lesser Horseshoe species. As the names imply, the Greater Horseshoe bat is one of the largest in Britain, with a wingspan up to 400cm, while the Lesser Horseshoe is one of Britain's smallest species, with a wingspan as short as 200cm. Up to 15 other species hibernate in the caves, including the Whiskered Bat and the very rare Bechstein's Bat.

If you visit during the summer months you will probably not see any bats, but you may see a few in spring or October. When we visited in April there were a few bats to keep our tour group on its toes, but they don't care for people much and will try to avoid us if they can, so don't let the [possible] presence of bats put you off!

The presence of the bats and the unusual geology the caves have been designated a Site of Special Scientific Interest (SSSI).

The caves are only accessible by guided tour, which lasts about 1 hour. Our tour group was about 10 people, and we were led by a very knowledgeable ex-miner. My best tip is to dress warmly; it gets cold underground, and though there was very little in the way of drips, the caves can be damp in places, so come sensibly dressed.

Tours begin in a large open cave where you can see a display of miner's hand tools and a mechanical stone saw, as well as a very large section of Beer stone carved into a beautifully intricate section of window tracery.

Outside the cave entrance is a small gift shop which houses a museum on the history of the quarry and Beer stone. You can see historic tools, photos, and pieces of carved Beer stone hundres of years old as well as Roman coins found inside the caves.

We highly enjoyed our tour of the Beer Quarry Caves. Our guide was excellent, and it was fascinating to see how the caves had been used over such a long period of time. I just wish I'd dressed more warmly! 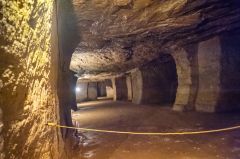 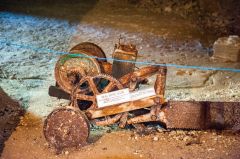 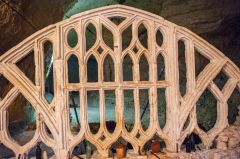 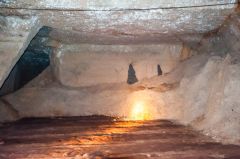 Self Catering near Beer