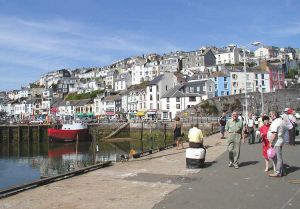 A pleasant fishing town on Tor Bay, looking across to Torquay. William of Orange, soon to become William III of England, landed at Brixton in 1688 on his way to London and his coronation.

The first evidence of a permanent settlement at Brixham comes from the Saxon period, with settlers possibly arriving by sea from Hampshire as early as the 6th century. The town was recorded in the Domesday Book of 1086, though with only 39 residents. The town grew throughout the medieval period and became the largest fishing port in the south-west of England.

So Brixham would have been a lively, bustling place when William of Orange came ashore on 5 November 1685 and issued 'The Liberties of England and The Protestant Religion I Will Maintain' promising to uphold the laws and traditions of his new realm.

The Dutch landing is recalled in the name of Overgang road leading from the harbour to the place where William's men made their camp (Overgang is Dutch for a passage, or crossing).

The town is based around the harbour, with steep hills rising up from the waterside. Picturesque cottages line the streets near the harbour, but none more picturesque than Coffin House, so-named because it resembles a coffin in shape.

Perhaps the most interesting historic attraction isn't authentic; it is a full-sized replica of Sir Francis Drake's ship, the Golden Hinde, which is permanently moored at the harbour.

Rev HF Lyte composed the lyrics to the hymn Abide With Me while staying at nearby Berry Head House, now a hotel. Lyte served as vicar for St Mary's church, built around 1360 to replace a Norman church, itself a replacement for a still earlier Saxon building. 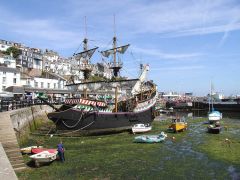 More self catering near Brixham >>

More bed and breakfasts near Brixham >> 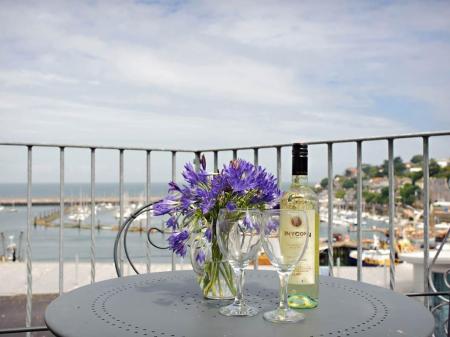 This delightful fisherman?s cottage in the harbour town of Brixham in South Devon, can sleep four people in two bedrooms.
Sleeps 4 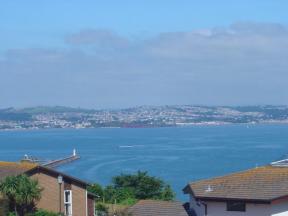