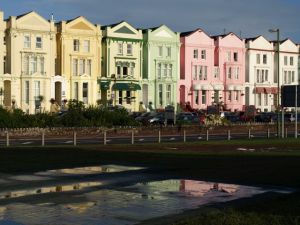 A large seaside town on Tor Bay in south Devon, Paignton is a popular resort area, with two large, sandy beaches to enjoy. Much of Paignton is geared to the tourist trade, with all the facilities one would expect in a seaside family holiday resort.

The town has a long history, stretching back into the Iron Age. For over a thousand years Paignton was a simple fishing village. Things began to change when the harbour was created in the 19th century, but it was really the arrival of the railway in 1859 that transformed Paignton into a popular seaside resort; one of the busiest Victorian holiday centres on the 'English Riviera'.

One reminder of Paignton's heritage as a resort town is the Pier, built in 1879 and stretching 780 feet out into Tor Bay. The Pier was designed by George Soudon for Arthur Dendy, a wealthy barrister.

At the end of the Pier was a traditional pavilion, acting as a venue for opera, dancing, and recitals. The Victorian amusement buildings were destroyed by fire in 1919, but the entire Pier was redeveloped in 1980 as an amusement arcade.

Paignton's parish church is a treasure trove of local history. The church began in the Saxon period, and the foundations of that early church still remain.

Look for the Norman font, built of local red sandstone. The font was discarded when a 15th-century font was installed. It was buried in the churchyard, then exhumed and put to use as a garden vase. It was restored to its rightful place inside the church in 1930.

The north door is 14th century, and set within the wooden panels is a small hatch for putting out unruly dogs. In the north aisle is a medieval tomb recess and a grave slab discovered being used as a drain cover.

The pulpit is 15th century and carved of Beer stone. It is rare to find intact pre-Reformation pulpits in English churches. In the south transept is a beautifully carved early 16th century memorial to the Kirkham family of Blagdon.

One of the most iconic buildings in Paignton is the Paignton Club, built in 1882 at the southern end of the promenade. The Club is a wonderful example of Victorian elegance and acts as a social club and event venue.

Oldway Mansion, formerly owned by the Singer family of sewing machine fame, is now the local authority office. Also of interest is Kirkham House, a stone-built medieval house preserved by English Heritage. The House dates to the 14th century and was probably built for a successful merchant. There is a parlour and vaulted hall, with a gallery and bedrooms on the first floor. The house retains its original oak beams. 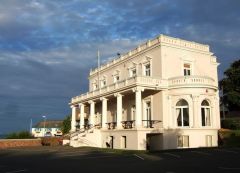 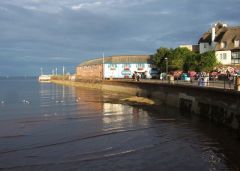 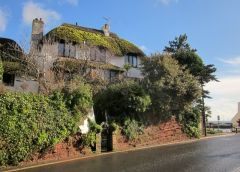 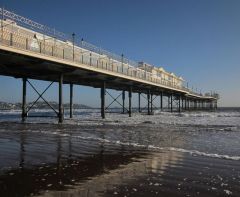 More self catering near Paignton >>

More bed and breakfasts near Paignton >> 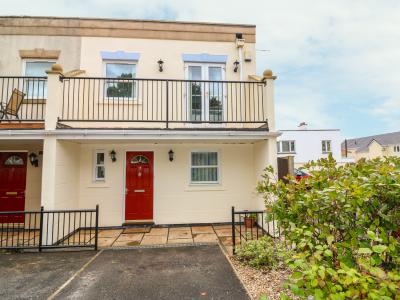 This well-presented semi-detached cottage is situated in the coastal town of Paignton in Devon and can sleep six people in three bedrooms.
Sleeps 6