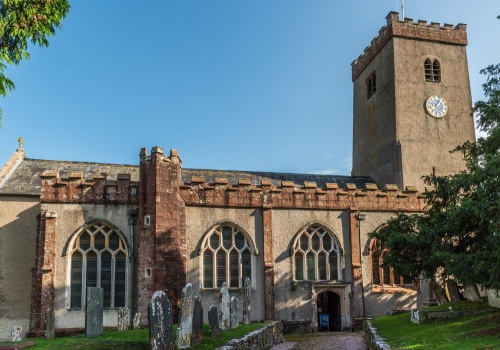 There has been a church on the hill overlooking Stoke Gabriel Creek for over one thousand years. A church was listed in the Domesday survey of 1086, and at that time there was a yew tree in the churchyard already thought to be several centuries old. Today that yew tree is between 1200 and 1400 years old, making it amongst the oldest trees in Britain.

Legend says that if you can walk around the tree backwards seven times without stumbling you will have a wish granted. I tried; it's harder than it sounds!

The legend is remembered in this verse:

You approach the church up a cobbled lane passing the former National School and the verger's cottage. At the head of the lane is Church House Inn, founded around 1300 as a residence for stonemasons rebuilding the church. It is still church property to this day. 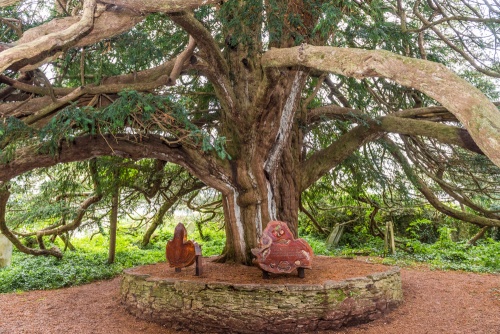 The oldest part of the present church is the striking 13th-century tower. The rest of the church was rebuilt in the 15th century after it fell into decay. There is a clock on two faces of the tower - north and west.

At the west end of the church is an early 15th-century octagonal font with its original lead lining.

The glory of Stoke Gabriel Church is the 15th-century oak screen separating the nave and the chancel. The screen is decorated with painted panels depicting Old Testament prophets and New Testament saints. It is intriguing to note that the prophets are shown wearing Tudor caps. The artists were obviously portraying the figures from their knowledge of contemporary clothing. 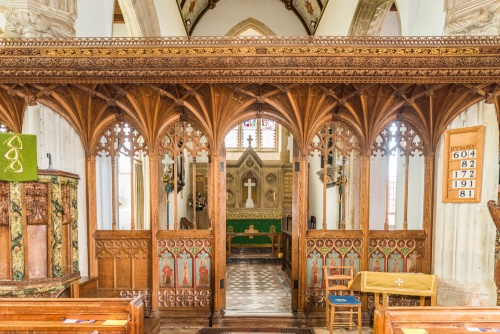 The beautifully carved and painted wineglass pulpit is from the same period as the screen; around 1400. The timber panels are held together with wooden pegs. The exterior is decorated with intricately carved grapevines.

Three original medieval pews remain; two at the west end of the church and one next to the font. There are several 19th-century box pews, originally reserved for wealthy local families. One of those families was the Churchwards, whose memorial window and brass plaque are directly above their old family pew.

Look for a pair of Green Men carved on capitals by the north and the south door. You can also make out a similar Green Man carving in the frieze of the rood screen.

The Vinegar Bible was printed by Queen Anne's royal printer, a man named Baskett, giving rise to the wry comment that the Bible was 'A Baskett-ful of errors'. 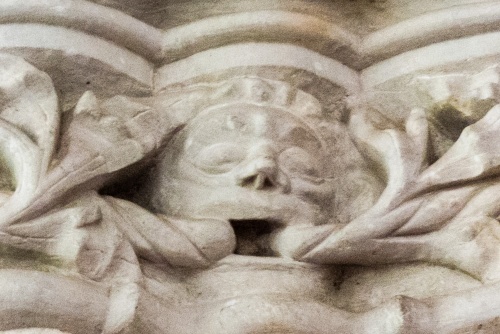 Perhaps the best monument is a slate tablet to Miohan, the wife of Roger Pomeroy of Sandridge. Look for a tablet in the chancel to Tamosin Lyde (d 1663) in the shape of a heart framed by laurel branches. Another early memorial is that of Arthur Champerlowne (d 1700). Probably the most famous person buried here is Rear admiral Thomas Hicks (d 1801).

One notable native of Stoke Gabriel was John Davis, whose christening is recorded in the church register in October 1543. Davis was a famous sea captain, explorer, scientist and writer. He helped develop the quadrant, discovered the Davis Strait between Greenland and Baffin Island, and claimed the Falkland Islands for Britain. He was married at Stoke Gabriel Church in 1582 and was killed by pirates on a voyage to the Orient in 1605. 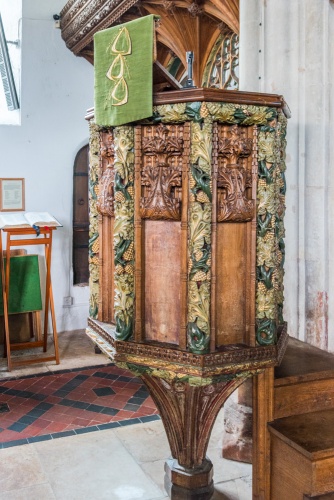 St Mary and St Gabriel Church stands at the end of Church Walk. There is no dedicated parking, but you can often find parking along nearby streets. If all else fails, there is a pay and display parking area at the harbour. The church was open when we visited. 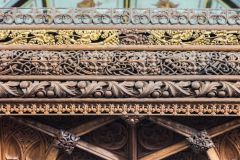 Self Catering near Stoke Gabriel