Totnes Castle sits high on a hill above the town of Totnes, commanding the approaches from three valleys. Totnes was first erected in the 11th century as a wooden palisade on a high mound and is one of the best surviving examples of a Norman motte and bailey castle.

The builder was a Norman knight named Judhael de Totnes (or Judhael of Brittany), who was awarded the old Saxon burgh here by William the Conqueror.

Judhael de Totnes' new castle was erected on traditional Norman lines, with a wooden palisade enclosing a large area, or bailey, within which was a mound, or motte, with a timber fort on the top. The mound rose to a height of 17.5 metres (roughly 55 feet) with a base 56 metres in diameter (175 feet).

Judhael did not have long to enjoy his new estates, however, for he supported Robert of Normandy against his brother William II, and Totnes had his estates seized by the victorious William, who granted them to Roger de Nonant. When William's brother Henry took the throne as Henry I, he did not return the estates at Totnes but instead kept them in crown control. The stone keep from Castle Street

In 1196 Totnes was granted to the powerful de Braose family, and it was probably Reginald de Braose who replaced the timber fort with a stone shell keep around 1219. The de Braose owners ceded to another powerful Norman family, the Cantilupes, around 1230.

The castle finally passed to the de la Zouche (or Zouch) family in 1273. The Zouches were based in the Midlands (see Ashby de la Zouch Castle) and seldom visited Totnes, but the castle seems to have been kept in a reasonable state of repair until the 16th century.

Extensive remodelling in the 13th and 14th centuries created a circular stone keep atop the mound, surrounded by a curtain wall. The keep has survived in excellent condition, though the outer defences have been left to crumble. The style is that of a traditional Norman shell keep, attributed to William, Lord Zouche. 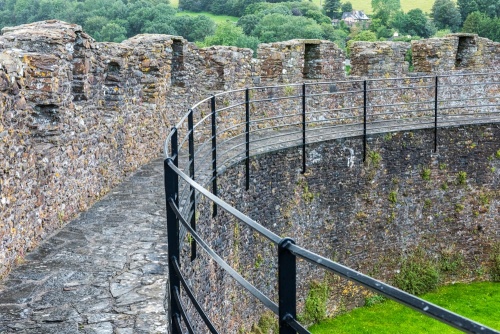 The castle as we see it today largely dates from 1326 when Edward II ordered it to be repaired. There are two main staircases inside the thickness of the walls, leading up to a parapet walk protected by battlements. The structure is a U-shape, protected on three sides by a high curtain wall.

Within the keep are the foundation walls of a simple rectangular building, though it is not immediately clear what the building was used for. Near the keep is a short section of the medieval town wall, with what remains of the North Gate.

We met a friendly English Heritage guide inside the keep (while sheltering from a sudden rain shower). He told us that the castle was never intended to withstand a siege and equally, was never intended as a residence. Rather it was a place for the Norman lord of the manor to ride out from to counter any threat to his lands.

That explains why the keep and the surrounding ditches and walls were never developed into anything more grandiose. That lack of later development is what makes Totnes Castle so interesting today; it remains one of the best and least altered examples of a traditional motte and bailey fortification in England. Our visit to Totnes Castle

English Heritage has produced a very good guide to the castle for children, full of interesting historical anecdotes and games designed to teach children about the castle in a painless way. My own daughter at age 4 was fascinated by the guide and kept asking for it to be read to her, many months after our visit to Totnes.

There is no dedicated parking area for the castle but there is a pay and display car park on North Street, only 100 yards from the castle entrance. The castle is very well signposted from major roads - just follow the brown tourist signs. 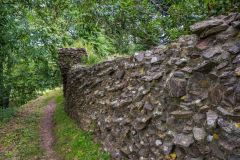 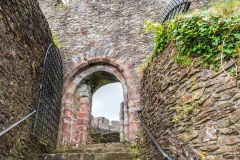 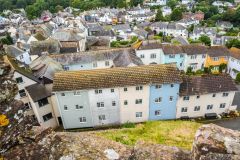 More self catering near Totnes Castle