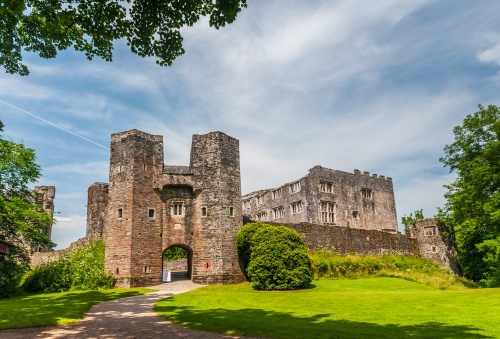 Berry Pomeroy Castle's dramatic location on a steep hillside is well suited to its reputation as one of the most haunted castles in England. There have been only two families of owners since 1069; the Pomeroys and the Seymours. The first structure on this site dates to the 13th century, though that building was not a proper castle but a manor house.

It was not until the 16th century that the Pomeroy family rebuilt a medieval manor on the site in the form of a defensible castle, making Berry Pomeroy one of the last private castles to be built in England.

The castle stands on a high point of land above the Gatcombe valley, a few miles north east of the market town of Totnes. The Pomeroy family made this their home after the Norman Conquest, and there was certainly a manor house on the site during the later Middle Ages. A crown survey of 1292 describes a manor house here, but the earliest written record of a castle on the site dates to 1496.

The most likely builder of that castle is Henry Pomeroy, lord of the manor from 1446-1487. We do know that sometime in the late 15th century the Pomeroy's converted their manor into a fortified castle, built to withstand artillery attacks. This was set within a large deer park and protected by a dry moat.

Why the decision to convert a comfortable house into a fortified castle? The most likely answer is that Henry Pomeroy was alarmed by the possibility of a French invasion. Berry Pomeroy is only a few miles from the coast, and in the late 15th century French raids were always a distinct possibility. It was an eminently sensible decision based on the political climate of the times. 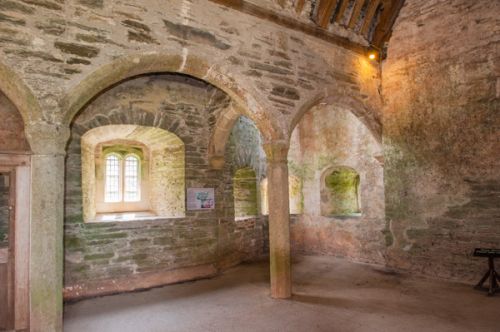 Inside the medieval gatehouse tower

Berry Pomeroy is built around a central courtyard, with a gatehouse and a trio of towers connected by a curtain wall. The corner towers and gatehouse all have gun ports at the ground floor level, aimed to create a continuous line of fire down the dry moat.

The obvious inference is that the builders were making the best use of new advances in artillery and intended their castle to be easily defended. A recent discovery in an upper chamber of the gatehouse has uncovered a wall painting, dated to about 1500, depicting the Adoration of the Magi. 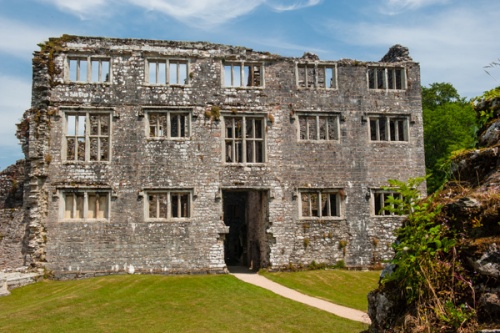 In 1537 the castle was purchased by Edward Seymour, Duke of Somerset and Lord Protector to Edward VI. He launched an ambitious project to create a Renaissance mansion overlooking the valley. But Somerset was executed for treason in 1552 and it was left to his son, also named Edward Seymour, to complete his father's vision, but on a much less grandiose scale. This he did, and he lived here from 1575-1593.

The remains of Lord Seymour's mansion still stand to a height of four storeys and give some idea of just how grand and impressive the mansion would have been when finished.

Lord Seymour's son, Sir Edward, the 1st baronet, embarked on a grand scheme to enlarge and extend his father's work, with the addition of a state range of apartments on the north-west side of the site, beyond the medieval defences. 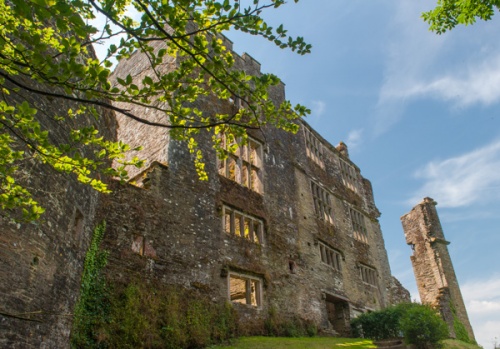 The view from the east terrace

In the late 17th century, however, Berry Pomeroy was abandoned, when Sir Edward Seymour (1633-1708) moved to Maiden Bradley in Wiltshire.

The castle was left to decay, becoming nothing more than a romantic ruin. But soon, strange tales began to be associated with that ruin, until the castle gained a reputation as one of most haunted in England, exceeded only, perhaps, by the Tower of London.

More self catering near Berry Pomeroy