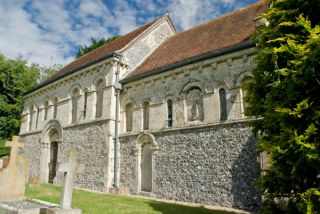 Barfreston
The village of Barfreston was a stopover place during the Middle Ages for pilgrims visiting the shrine of St Thomas a Becket in Canterbury. Today, this once important place is little more than a peaceful hamlet set in quite attractive wooded lanes and fields.

There is a very nice village pub, but the primary reason to visit Barfreston is to see the church of St Nicholas, a 12th-century gem that is a wonderful example of Norman architecture. The church has richly carved mouldings and doorways. Above the south door is a carving thought to be the first representation of Thomas a Becket following his death.

A unique feature of Barfreston church is that the church bell is hung, not from a bellcote, but from the branches of a yew tree just outside the church.

Immediately behind the church is Barfreston Manor, an early 18th-century manor house listed Grade II to heritage interest. The manor is built of red brick and stands 2 storeys high, over a basement level.

The manor of Barfreston belonged to the Archbishop of Canterbury prior to the Norman Conquest. After the Conquest it was granted to Odo, Bishop of Bayeux, then to the Norman lord Hugh de Port, the new Constable of Dover.

Barfreston lies on the Miner's Way Trail, a long-distance footpath linking Kent locations with a history of coal mining.

More self catering near Barfreston >>

More bed and breakfasts near Barfreston >>