HERITAGE HIGHLIGHTS:   Superbly carved Norman south door, one of the finest in the country. 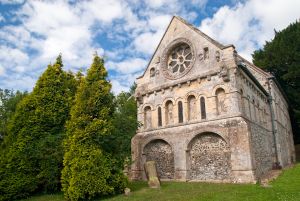 The small church of St Nicholas in Barfreston (or Barfrestone) is one of the hidden gems of Norman architecture in Kent, possibly in all of England. In the medieval period, the village of Barfreston was a stopover place for pilgrims on their way to the shrine of St Thomas a Becket at Canterbury. That may account for the likeness of Becket carved on the south door, the first known representation of Becket in the country.

Ah, the south door. Forgive me while I wax lyrical! If you enjoy Norman architecture. or just medieval architecture in general, you are in for a treat! The tympanum and arches of the south door boast some of the finest Norman carvings in Britain. At the centre of the tympanum is a figure of Christ. At his feet are two mermaids, a gryphon, and a figure of a sphinx.

Above this figure are three semi-circular bands of carvings. The first is simply a band of leaves. The second contains 12 medallions, featuring strange beasts playing musical instruments. One theory is that the masons were inspired by popular bestiaries of the day.

From left to right we see three figures playing instruments (a hare with a flageolet, an ape with pan pipes, and a woman with a dulcimer), a bear playing the harp, carousing beasts, a Miming figure, a hare toasting a partridge, a pair of lovers, two men arguing, a horse rider, a falconer, hounds chasing a hare, a churchman, and, finally, a monkey riding a goat, carrying a dead hare.

The third band of carvings draws on signs of the zodiac and the 'labours of the months'. Here we find two rams butting heads, a peacock, a pair of manticores (beasts with human heads), dragons, a gryphon, and a hedgehog.

The door has several scratch dials, a form of primitive sundial. The east wall of the church has a superb wheel window, with eight spokes radiating out from the centre. Beneath the wheel window are three deeply splayed lancet windows.

Around the eaves are a wonderful collection of carved heads, of the type normally (but erroneously) called gargoyles. These are both human and animal in form, and bear comparison with the justly famous carvings at Kilpeck, in Herefordshire. These carved heads may represent Christianised versions of earlier pagan tree gods and fertility symbols.

The church is small, stretching less than 50 feet from west to east. It was probably founded in the late 11th century by a Norman knight named Hugo de Port. That early Norman building was remodelled around 1180, with the addition of over 100 superb carvings that we can see today. It is possible that the 12th-century carvings were funded by Adam de Port, Hugo's great-grandson, as thanks for a beneficial marriage he contracted in 1180.

The north door, now blocked up, has some extremely interesting carvings of grotesque faces on the door jambs. Facing each other across the door opening are two faces, one grimacing as if in deep pain, another in an attitude of despair.

The interior of St Nicholas is fairly plain, with the exception of a monument to Thomas Boys. The chancel arch is quite beautifully carved, with traditional Norman saw tooth and zig-zag patterns. Beneath the windows of the nave is a beautifully carved string course, with human and animal figures.

Another unusual feature of St Nicholas church is that the bell does not hang in a belfry, but, rather, it is fixed in the branches of a tall yew tree outside the west end of the church, between the churchyard and the village pub next door, called, appropriately enough, the Yew Tree Inn.

All in all, the little church of St Nicholas at Barfreston is an absolute delight; one of the finest examples of Norman architecture in England, and well worth a visit. 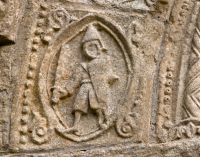 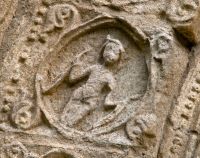 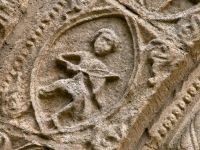