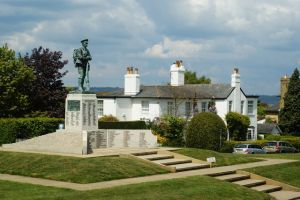 Sevenoaks war memorial
The town of Sevenoaks grew up around a chapel surrounded by seven oak trees in what is now Knole Park. Knole is a 15th-century house built by an Archbishop of Canterbury and once owned by Henry VIII.

Sevenoaks is home to the Vine cricket ground, which may well be the oldest cricket ground in existence, as a match was reported here in 1734. Three miles distant is the moated manor house of Ightham Mote.

There are a large number of attractive historic buildings in Sevenoaks. Among those are the Chequers Inn, a former coaching inn dating to the 16th century, and Sevenoaks School and Almshouses, a row of 17th-century cottages replacing earlier 15th-century buildings.

The parish church of St Nicholas dates from the 13th to the 15th century. Poet John Donne served as rector of St Nicholas from 1616 to 1631. Red House is a lovely red brick house dating to the late 17th century. Jane Austen's great uncle, Sir Francis Austen owned the house, and the authoress was a visitor.

More self catering near Sevenoaks >>

More bed and breakfasts near Sevenoaks >>