The solar block is all that remains of this 13th-century knight's house. The house was built by the Culpeper (Culpepper) family, who were powerful landowners from Aylesford. They built Old Soar to be a combination prestigious dwelling house and defensible stronghold. It was never by any stretch a castle, but it was far more of a defensive structure than a simple hall house. It was also a testament to their influence and wealth.

You enter the manor through the vaulted undercroft. In the undercroft walls are arrow slits, which admit a dim light to the interior. This area would have been used to store goods such as cloth and spices.

From the undercroft, a spiral stone stair leads up to the solar floor. At one time a great hall would have branched off at the top of the stair, but now all that is left is the solar. This chamber would have been used as private quarters by the master of the house and his family; a place they could escape from servants and guests. The door to the solar dates from about 1500. 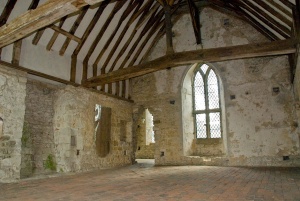 The solar is a comparatively bright and spacious room, with three large windows, the two at the east and west end with large window seats of Bethersden marble. A central fireplace was used for heat and light to this space, which would have had a bed, chest, and table, plus wall hangings for comfort and fashion.

There would originally have been a small window or peephole in one wall so that family members could look down into the great hall unobserved.

Look up at the roof of the solar. It is made in the style known as crown-post collar-purlin and is one of the best examples in England of this style.

Parts of the original stone floor survive near the west window, but the rest is brick from the 16th century. At the far end of the solar is a small chapel. Set into the wall is a small 14th-century piscina (a place to wash communion vessels) and one finely carved corbel survives.

The presence of the family chapel meant that the Culpeppers probably employed a private chaplain, who would likely have acted as a clerk to the lord of the manor in addition to his religious duties.

At the opposite corner of the solar to the chapel is a garderobe chamber (latrines). This was probably a three-seater. Outside at ground level you can see a stone arch giving access to a clean-out area below the garderobe shaft.

Also outside is a small chapel. This is now used as an exhibition centre so that visitors can learn more about Old Soar and the people who lived here.

We do not know when the Culpeppers ceased living at Old Soar, but it seems likely that they left sometime in the 16th century. In 1601 Sir Thomas Culpepper sold the manor to Nicholas Miller of Oxenhoath. The great hall was knocked down around 1780 and the current farmhouse built in its place.

The solar block was probably spared because it was in use as farm buildings, a function it fulfilled until the mid 20th century. It was granted to the National Trust in 1947 and fully restored two years later.

As a final note, the location of the manor is idyllic; it is located on a winding, narrow lane in a countryside setting that feels like it has not changed in hundreds of years.