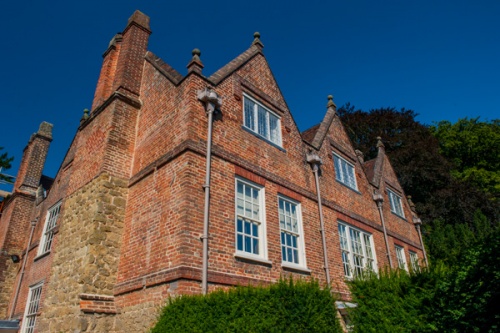 Quebec House
The simple red-brick childhood home of General James Wolfe, victor of the Battle of Quebec. The house features memorabilia relating to Wolfe, and exhibits on Georgian life. Though it has Tudor roots, much of the house is Jacobean and Georgian in style.

James Wolfe lived here until he was 11 when his family moved to Greenwich in 1738. At that time the house was named Spiers; it only became known as Quebec House after Wolfe's death.

Simon Jenkins, in his popular book 'England's Thousand Best Houses', seems exasperated that the house is so full of Wolfe memorabilia, but after all, that IS the point of preserving this attractive building. And if it were not for the generosity of Canadian Joseph Learmont and his wife, the house would never have been preserved at all. Learmont purchased the house and granted it to the National Trust in 1913, making it one of the Trust's first house properties.

Yes, it is full to bursting with memorabilia related to General Wolfe, including variations on the famous painting by Benjamin West of the unfortunate Wolfe's death at Quebec. But that's part of the fascination of Quebec House; we get to glimpse into the life and career of one man and his family, to see how they lived - and died.

Several highlights of the house really stick in my mind; the ground floor parlour, with its beautifully carved mantlepiece, is one. Another is Wolfe's travelling canteen, a rather amazing piece of Georgian woodwork, with carefully crafted compartments and slots for plates, cups, saucers, cooking equipment, and all the paraphernalia that Wolfe carried along with him on campaign. The Broadwood piano in the upstairs drawing room is lovely, and on it stands music composed in honour of Wolfe after his death.

The house is set in very small gardens, with an exhibition on Wolfe's life and the campaign for Quebec in an outbuilding immediately behind the house. Quebec House is rather cramped for space, so there is no parking on site, but the main (paid) town car park is a 2 minute walk away, down the A25 in the direction of Brasted.

This is the most interactive historic house I've visited. It's focused on the story of General James Wolfe, who led the 1759 siege of Quebec city during the 7 Years' War, which led to the British dominance of what we now call Canada, and Wolfe's death. The house was rented by his family as a town residence. Wolfe was not an aristocrat; his family was upper middle class, and the house is typical of that. It is surprisingly large, with four floors, but the garden is quite small. The location was probably the major attraction for the Wolfes. The area was very popular among the gentry.

Some of the rooms are presented in a fairly basic manner: the usual arrangement of antique furniture, portraits, and the odd decorative weapon. But in three rooms, the visit becomes more special. In one, you can handle replicas of the equipment used by the British soldiers at Quebec. In the drawing room, there is paper, a blotting pad, and a quill for the use of visitors. Alongside it stands proof of cultural advancements in the 18th century: a spirit kettle, which can be boiled anywhere. And in the kitchen, you can try some food (free in small amounts, it's part of the visit). This may vary day to day, depending on what the volunteers want to cook. This makes the place come to life. You don't look at a historic house, you experience it as a guest. 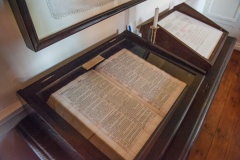 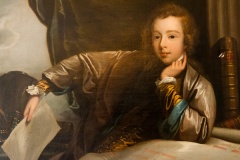 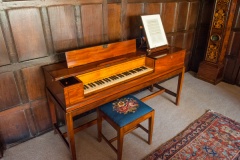 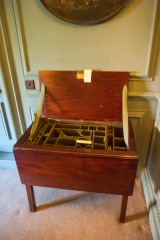 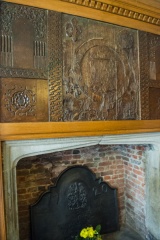 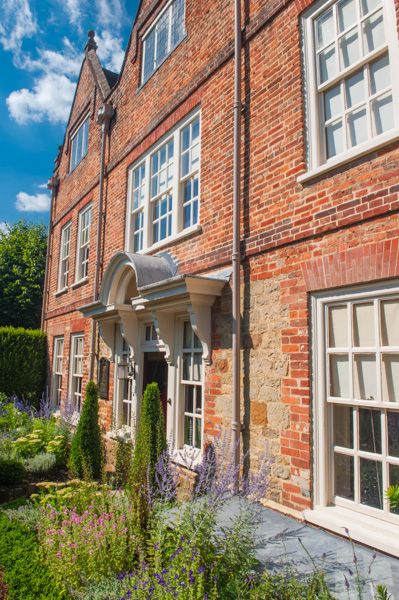 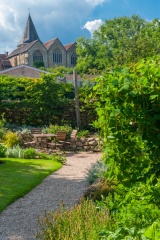 The garden and parish
church beyond

More self catering near Quebec House >>