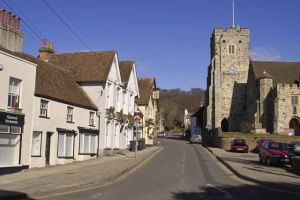 Wrotham is a pretty village at the foot of the North Downs. The village dates to at least the 8th century, when it is recorded as 'Uurotaham', meaning the 'homestead of Wrota'. Another possibility is that the name comes from the Old English word 'wrot', meaning a snout of a pig, so Wrotham was a 'ham', or settlement, where pigs were raised.

The Archbishops of Canterbury levied a tax in kind upon the locals known as pannage, and the people of Wrotham paid the Archbishop 500 pigs, suggesting that the number of pigs grazing the local forests must have been 10 times that number.

The Archbishops maintained a medieval palace in Wrotham and may have worshipped at the lovely parish church. We do not know exactly when the Palace was built, but it was certainly before the Norman Conquest, possibly around AD 964 when King Athelstan gave land here to the Archbishops.

The palace stood on the east side of the churchyard, but very few remains can be seen. It was dismantled by Archbishop Simon Islip in 1349, and the material used to build a manor at Maidstone. The Bull Hotel once formed part of the Palace stables. The palace should not be confused with Wrotham Place, a Jacobean house on the High Street.

The Pilgrim's Way long distance path passes through the village, following the route taken by medieval pilgrims to Thomas Becket's shrine in Canterbury.

It was here that Henry VIII heard the news of Anne Boleyn's execution in 1536, freeing him to marry Jane Seymour.

An unusual vaulted passage goes through the base of the tower. One one side of the passage is a piece of sandstone with deep grooves, probably made by archers sharpening their arrows before archery practice.

In the tower is one of the oldest clocks in Kent, installed in 1614. In the north aisle is the 13th-century tomb of the church founder, Richard de Wrotham. The east window was brought from St Alban's Church, Wood Street, London, after that church was damaged by bombs in 1940.

The window is thought to have been designed by Inigo Jones or, perhaps, Sir Christopher Wren. The 14th-century rood screen survived the Reformation, and there is a 13th-century font, as well as a number of 15th and 16th-century memorial brasses set into the floor.

Above the village is Wrotham Beacon, site of the very first FM broadcast tower in England, built circa 1955. 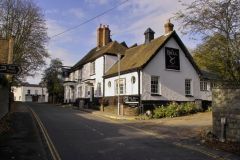 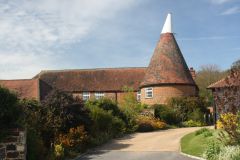 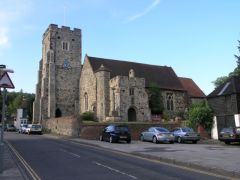 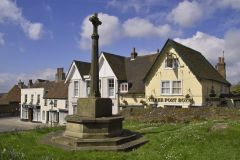 More self catering near Wrotham >>

More bed and breakfasts near Wrotham >>