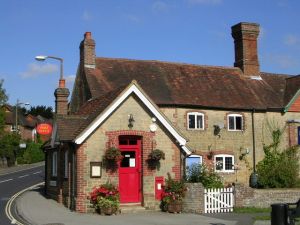 Fernhurst post office
A village in the West Sussex Weald, Fernhurst was a centre for iron working in the 17th and 18th centuries. There are several old inns in the village, but the most interesting historic building is the church of St Margaret of Antioch, which dates to the 12th century.

Fernhurst was notorious for its bad roads prior to the 18th century. The so-called 'Fernhurst clay' made passing to - or through - the village a major challenge! Prosperity with the booming iron industry led to great improvements to the roads, thankfully!

There are excellent walks in the area, which is set within a good distance of several of the tallest hills in West Sussex. A path from the Red Lion pub takes you to the top of Blackdown, the tallest point in the Weald.

There are a number of 14th and 15th-century half-timbered buildings in Fernhurst, and a goodly number of later 16th and 17th-century houses.

More self catering near Fernhurst >>

More bed and breakfasts near Fernhurst >>