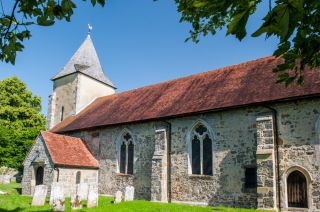 Trotton
Trotton is an attractive village in the valley of the River Rother near Chithurst. Crossing the river is the old Medieval Bridge, built in the late 14th century by Lord Thomas Camoys, a hero of Agincourt. A memorial to Camoys and his second wife stands in the superb parish church of St George.

Camoys served with Henry V in his wars on the continent and commanded the left flank of the English armies at the Battle of Agincourt. Beside him lies an effigy of his second wife Elizabeth Mortimer, whose first husband was Henry 'Hotspur' Percy. Elizabeth was the 'Gentle Kate' of Shakespeare's play Henry IV.

The ancient church boasts some beautiful medieval wall paintings and the oldest known example of a full-length funerary brass of a woman, that of Margaret Camoys, who died in 1310.

Near the church is the old manor house of Trotton Place, built around 1600 but altered in the 18th century. West of the house is a dovecote built in 1626.

Another historic landmark in Trotton is the ancient stone bridge across the River Rother. The bridge dates to around 1600 and is made of sandstone quarried near Hythe. It boasts five arches and huge cutwaters on the south facade. The bridge is listed Grade I for its heritage value.

At the junction of Terwick Lane and the A272 is the Keeper's Arms pub, with an 18th-century facade that hides a much older core.

The manor of Trotton is mentioned in the Domesday Book of 1086. According to the records, the estate here was held by Countess Gida, the wife of Earl Godwin. The estate was later given by the Earl of Arundel to the lords of Midhurst. It stayed in the Gatesden family for several generations. Then in Sometime around 1285, Margaret de Gatesden married John de Camoys, beginning the Camoys' long association with Trotton.

More self catering near Trotton >>

More bed and breakfasts near Trotton >>