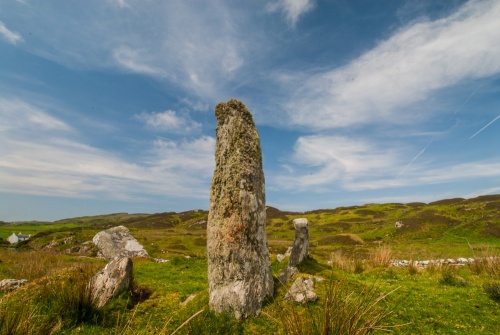 Buaile Riabhach is a small stone circle on a hill above Scalasaig, with a 7-foot high standing stone forming a circle with seven smaller stones ranging from 18 inches to 2.5 feet high. The taller stone was said locally to represent Christ, and the smaller stones to represent the Apostles.

The site was excavated in 1881, and it is thought that a sword or small dagger was found. The circle may, in fact, be a curbed cairn, now filled in with earth.

It's rather hard to know how to describe Buaile Riabhach. Is it a stone circle, a cairn with the addition of standing stones, or a standing stone? Or maybe a bit of each? The location is wonderful, though, with views south to Scalasaig.

From the parking area on the B8086 just past opposite the Colonsay Hotel, walk up the hotel drive as if heading for the bar but take the track to the left of the bar and follow it past Island Lodges and a couple of houses until you reach another track. This is the Old Road, leading north to Kiloran. Turn right onto the Old Road. The road begins to climb and you see the stone circle on the right after about 300m. 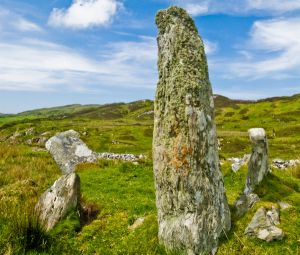 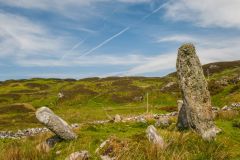 Nearby accommodation is calculated 'as the crow flies' from Buaile Riabhach Stone Circle. 'Nearest' may involve a long drive up and down glens or, if you are near the coast, may include a ferry ride! Please check the property map to make sure the location is right for you.