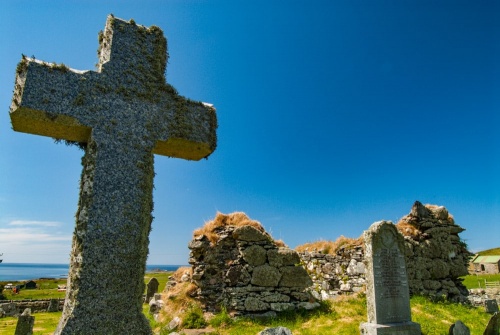 Cille Chattan, sometimes called simply Kilchattan Chapel, is a ruined medieval chapel in the Colonsay hamlet of Lower Kilchattan. The chapel is thought to date to the 14th century and was built on the site of a much earlier building. It stands within a burial ground.

The name Cille Chattan translates from Gaelic as St Catan's Chapel or Cell, referring to the little-known early Christian missionary St Chattan, or Catan. The name of the settlement echoes the same dedication; Kilchattan comes from the prefix Kil, or Cille, meaning a church or churchyard, and Chattan, the name of the saint. It is possible, though by no means certain, that Cille Chattan stands on the site of Catan's cell. 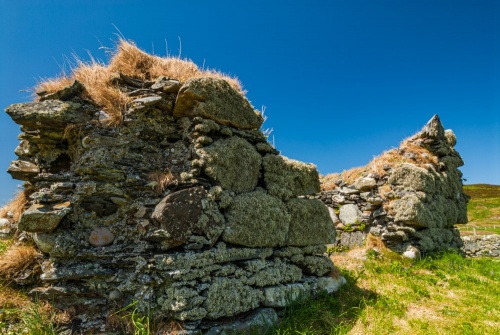 Very little is known about this obscure saint. Even the rough dates of his birth and death are uncertain, but he is thought to have lived between AD 500-570. Catan was born in Ireland, the son of Aedan of Dalriada, and was the uncle of St Blane. He established a cell on the Isle of Bute, where is thought to be buried, but he was active throughout the Hebrides, including on the islands of Luing, Gigha, Lismore, and Colonsay.

The chapel ruins stand on a raised section of ground in the middle of a burial ground that was enclosed in the late 19th century. The building measures 21' x 31' (about 6.4m x 9.4m) and is built of rubble stone bonded with lime mortar. The wall still stands to 8' (2.4m) on the north side. 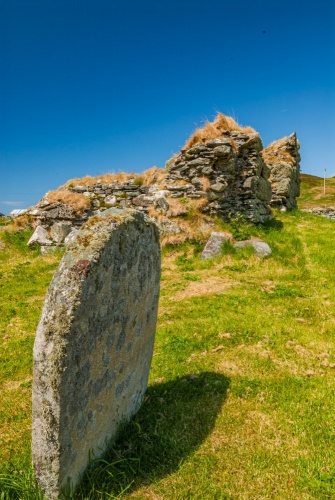 The chapel stands within a walled burial ground

The entire west wall is gone, as is half of the south wall. There is no obvious doorway, as the entrance is thought to have been in the now-vanished west gable wall, but there is an opening in the east wall that may have been a window.

A holy water stoup was found near the east end of the church and was moved to the Scalasaig Parish Church to serve as a font bowl.

Set into a bank on nearby Druim Clach croft, opposite the chapel, is Tobar Chattan (St Chattan's Well), a holy well linked to the church. When the well was investigated a marker stone in the shape of a phallic symbol incised with a cross was found, suggesting that the site was considered important before the arrival of Christianity.

Cille Chattan served as the parish church of Colonsay in the Post-Reformation period. The church was confirmed in a papal bull dated 1203 which assigned Colonsay to the monks of Iona. By the late medieval period it seems more likely that Colonsay parish would have been attached to Oronsay Priory.

It is unclear when Cille Chattan fell out of use. The earliest grave inside the church is thought to date to 1789.

Note: Do not mistake Cille Chattan in Lower Kilchattan for the ruined church at Upper Kilchattan, known as Cille Mhoire (St Mary's Chapel), located at grid reference NR37749578. Cille Mhoire is said to have been founded by monks from Iona.

Cill Chattan is located on the B8086 in Lower Kilchattan, within the stone-walled burial ground. It is easy to find parking along the verge.

Nearby accommodation is calculated 'as the crow flies' from Cille Chattan. 'Nearest' may involve a long drive up and down glens or, if you are near the coast, may include a ferry ride! Please check the property map to make sure the location is right for you.