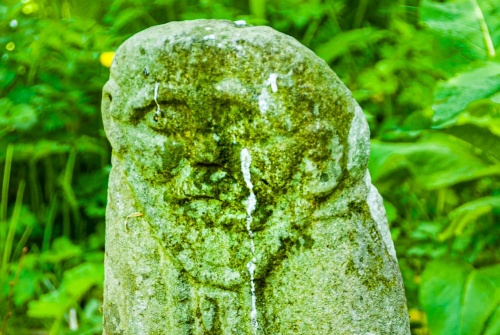 The Tobar Oran sculptured stone (alternately known as the Ruisg Buidhe stone) is an early Christian carved stone, or cross, found in the ruins of the deserted village of Ruisg Buidhe, on the northeast coast of Colonsay. The cross is believed to be late 7th or early 8th century, though an alternative date of the late 9th century has also been put forward.

The stone measures 0.37 metres by 0.33 metres (approximately 17 inches by 13 inches) and is unusually carved with a face, possibly that of Christ, or God, at the top, tapering to a fishtail at the bottom. The 'arms', such as they are, are no more than small bumps, carved in a tight spiral pattern. The carving is of a style found in Ireland, and more commonly, in the Mediterranean.

The stone is epidotic schist, quarried locally, which suggests that it was also carved by an inhabitant of Colonsay, rather than brought here from outside. 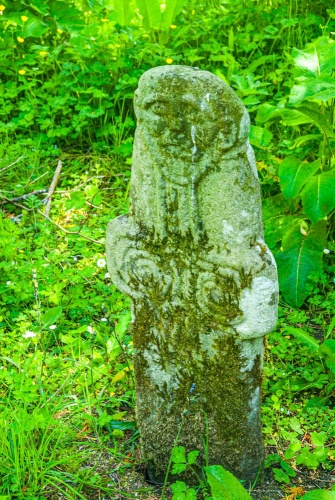 The stone originally stood near the chapel of Ruisg Buidhe, but it was then moved to the holy well of Tobar Oran, in the grounds of Colonsay House. There is a persistent rumour that Colonsay House is built on the site of a medieval monastery, though there is no evidence to support this.

The stone can be seen during Colonsay House Garden open days, usually twice a week in the summer months. It is located just inside and to the left of the main garden entrance.

Nearby accommodation is calculated 'as the crow flies' from Tobar Oran Sculptured Stone. 'Nearest' may involve a long drive up and down glens or, if you are near the coast, may include a ferry ride! Please check the property map to make sure the location is right for you.