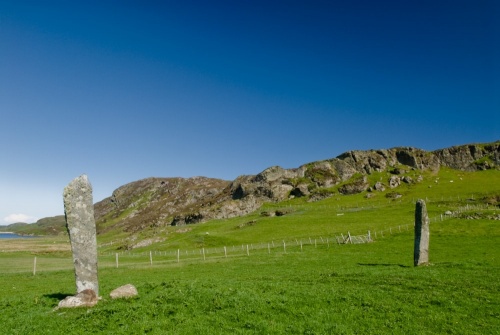 Fingal's Limpet Hammers are a pair of standing stones associated with the legendary Celtic giant Fingal. The stones stand in a field just to the west of Loch Fada, at Lower Kilchattan. They are all that remains of a stone circle. The stones are alternately called Carrach An.

The stones stand about 45 feet apart. The largest is 10'8" in height, the smaller stone rises to 8'8". The remainder of the circle is (barely) visible as the field has been ploughed in the past. The circle appears to have been about 48.5 feet in circumference.

The name 'Fingal's Limpet Hammers' is intriguing; a limpet hammer is a device for breaking limpets off rocks. The name apparently stuck because the stones are similar in shape to limpet hammers used locally, and, of course, they are so large that only a giant like Fingal could wield them!

Access to the stones is easy; they are clearly visible from the road. So clearly visible, in fact, that the sign marking their location seems a bit redundant! There is a gate into the field, where the stones can easily be reached. 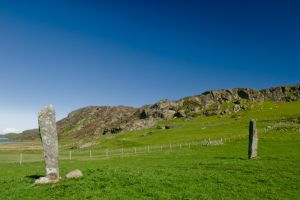 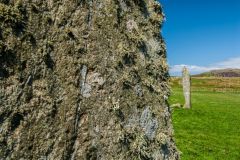 Nearby accommodation is calculated 'as the crow flies' from Fingal's Limpet Hammers. 'Nearest' may involve a long drive up and down glens or, if you are near the coast, may include a ferry ride! Please check the property map to make sure the location is right for you.