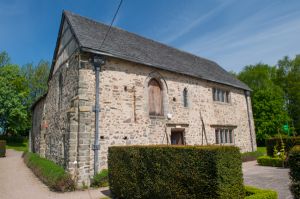 A small 13th century manor house in remarkably good condition, once owned by one of the Gunpowder Plot conspirators. The house is set in recreated 17th century gardens.
The house was begun around 1290, and claims to be the oldest surviving house in Leicestershire. Records suggest the builders were Robert and Isabella de Hurle. Robert was an administrator for the Earl of Buchan at Whitwick Castle. It is possible the Hurle's did not build the house but renovated an existing building, with would push the origins of Donington-le-Heath Manor back even further in time.

After Robert and Isabella died the house was rented out before being sold to the Pakeman family in the 14th century and then to the Digbys. One of the Digby owners was Sir Edward Digby, who was implicated in the 1605 Gunpowder Plot to kill James I.

The original building consisted simply of a hall over an undercroft, with projecting wings behind the hall. The wings now help enclose a courtyard. Many of the original medieval lancet windows survive, along with later 17th century windows inserted when the hall was 'modernised' in 1618 when large mullioned windows were inserted on the ground floor, and a large fireplace inserted for warmth and for cooking.

The ground floor windows were simple rectangular lancets, while upper storey windows were more decorative, suggesting that the family living quarters were on the upper floor. 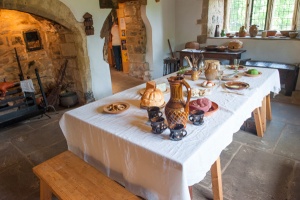 The 17th century kitchen
There were two large chambers probably used as drawing rooms, each with both internal and external doorways. Leading off each drawing room was a bedchamber. One first floor room has trefoil headed windows, suggesting that it was used as a chapel. One of the ground floor rooms has a drain in the floor, suggesting use as a dairy.

In the late 17th century the house was leased to tenant farmers. Sometime around this time a large barn was erected nearby (now used as a tea room). The manor was used as a farmhouse until the mid-20th century, and in latter years as a pigsty.

Leicestershire County Council restored the house in the 1960s, using some rooms for a display of artefacts related to the house and its owners. Other rooms have been restored to reflect how the house looked at different times in its history. There are medieval rooms, and other chambers showing what it was like in the Tudor and Stuart periods. There is plenty of authentic Jacobean furniture, some of it original to the house.

Richard III's Bed
One of the prize exhibits at Donington-le-Heath is a medieval bed from the White Boar Inn on High Cross Street in Leicester, said to have been slept in by Richard III on his way to the Battle of Bosworth Field in 1485. Like any important personage in the late medieval period, Richard travelled with his own bed; in fact, a well-made bed was a prize possession. So he brought his own, personal bed to Leicester while marching to battle at Bosworth. 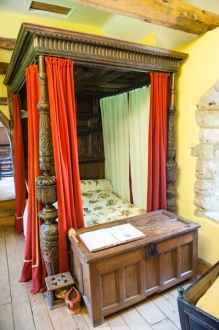 Richard III's Bed
After Richard lost his life at Bosworth the bed was stripped of its rich hangings and covers, but the bed itself was left at the inn. The innkeeper quickly renamed his inn 'The Blue Boar', in honour of the new monarch, Henry VIII, whose emblem was a blue boar. The bed became a popular attraction for local residents, and each owner of the Blue Boar left the bed in his will to his successor.

In the reign of Elizabeth I the owner was a man named Clarke. The landlord's wife was making the bed one day when a gold coin fell from the bed. The woman looked closely at the bed and found a secret hiding place built into the bottom of the frame. Inside the hidden pocket was a horde of gold coins, many dating from Richard III's reign and some much older.

One version of the story says that the innkeeper's wife was murdered once the secret was divulged. What we do know for certain is that the bed stayed at the Blue Boar and remained a popular attraction for centuries to follow.

Is the story true? Well, the bed base may well be medieval, but it is embellished with elaborately carved posts and a headboard which are certainly late additions, dating from the 16th to the 18th century. Whatever the truth of the legend, it is still a fascinating piece of historic furniture!

What makes the Manor House so interesting is that the structure has altered very little over the 7 centuries since it was built.

Around the house are gardens replanted in traditional 17th century style, including an herb garden, a decorative hedge maze, an orchard, and a flower garden. The gardens are not a restoration; that is, we do not know exactly what the original gardens surrounding the manor would have looked like. Rather, they are laid out to represent a typical 17th century garden for a small country manor like this.

Visiting
Don't come to Donington expecting a grand mansion; the Manor is essentially a farmhouse. What is fascinating is seeing how the house was used at different times in its history and how people lived here in the 13th century. 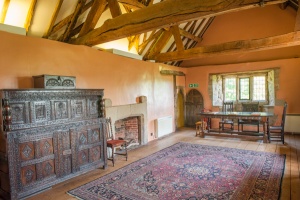 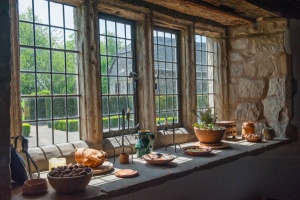 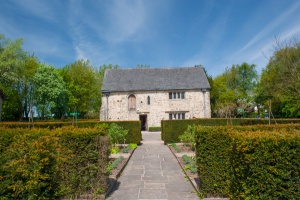 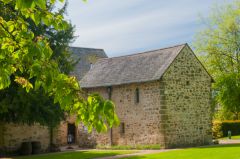 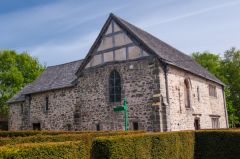 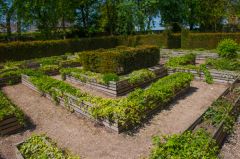 More self catering near Donington-le-Heath Manor >>