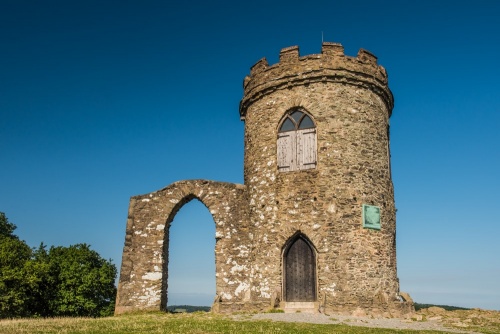 Old John Tower is an iconic folly at the highest point of Bradgate Park, a former medieval deer park north of Leicester. The tower is one of the most famous landmarks in Leicestershire and looks down over the ruins of Bradgate House, a Tudor mansion that was the birthplace of Lady Jane Grey.

It is often called the 'Icon of Leicestershire'. Indeed, the tower's outline has become so strongly associated with the county of Leicestershire that the Bradgate Park Trust registered it as a trademark.

The Tower is round and stands two storeys high. It is built to a romanticised Gothic design with a crenellated top. On one side a wall links the tower to a large Gothic archway. On the south side of the tower are the remains of 19th-century stables built for the 7th Earl of Stamford's racehorses. 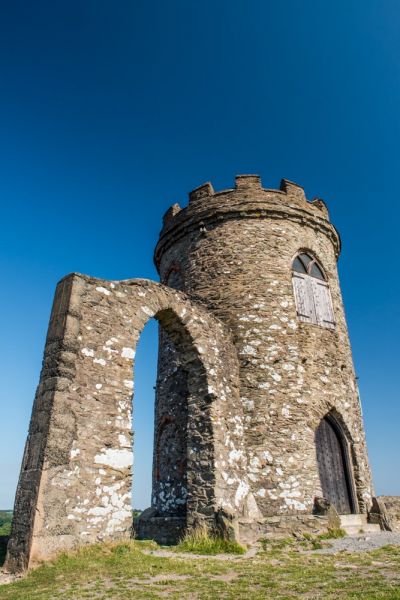 The tower from the south-west

The origins of Old John Tower are fairly mundane, but don't let the truth get in the way of a good story! The romanticised version of the folly's origins goes back to 1786 when the 5th Earl of Stamford threw a coming-of-age party for the 21st birthday of his son and heir George.

As part of the celebrations, the Earl had a huge bonfire lit on the highest point of Bradgate Park. The bonfire got out of control and set alight a windmill which had stood on the summit of the hill since the 1740s. The windmill collapsed, killing the miller. Another version of the story simply says that the man was an estate worker.

The Earl was filled with remorse and had a Gothic tower built on the site of the mill to honour the miller, whose name was John. The miler was known to have a fondness for drink, so the Earl added an archway to one side of the tower to make it resemble a tankard with a handle when seen from a distance. 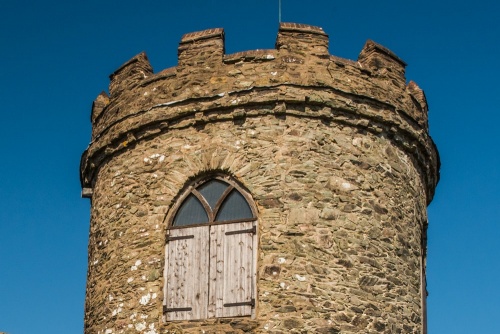 The castellated top of the tower

The truth is much less dramatic. Estate maps from 1745 show the hill already marked as Old John. It seems clear from the maps that the tower was built in 1784 by Thomas Sketchley of Anstey. It was never intended as a memorial but was purely a folly, or mock-Gothic ruin, possibly modelled after Mow Cop Castle in Cheshire, which is roughly the same design.

A short distance away from the Tower is the Leicestershire Yeomanry War Memorial, erected in 1924.

During the Victorian period, the Tower was used as an observation point, looking down on a horse-racing course laid out by the 7th Earl.

On the exterior of the Tower is a plaque commemorating the gift of Bradgate Park to the people of Leicester by Charles Bennion. The plaque is inscribed with the words:

'In grateful remembrance of Charles Bennion of Thurnby in this county, who in the year 1928 with the helpful concurrence of the heirs of the Greys of Groby purchased from them this park of Bradgate and presented it in trust for the city and county of Leicester that for all time it might be preserved in its natural state for the quiet enjoyment of the people of Leicestershire. His true memorial lies around.'

In the shadow of the Tower is an observation marker in the form of a circular cairn. The top of the marker holds a brass plate marked with the direction and distance of local landmarks that you can see from the Tower. 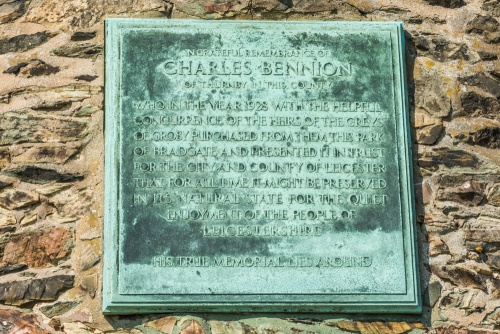 The plaque to Charles Bennion

Old John Tower stands in the north-west corner of Bradgate Park, a very short distance from the Hunts Hill car park. The car park is off a minor road north of Newtown Linford. If you prefer to explore the country park (and I recommend that you do), you can park at the main Newtown Linford car park.

From there simply take the clear trail uphill, loosely following the course of the park's western boundary wall. You will come first to the Yeomanry memorial and then shortly after you will reach the Tower itself. Allow good 20 minutes for this longer walk.

The interior of Old John Tower is normally closed to visitors (you can explore the exterior at any time). However, guides from the Bradgate Park visitor centre will open the Tower on specified Open Days throughout the summer months. The best place to keep track of potential opening times is on the Park's social media channels. Notices will also appear at the visitor centre, near Bradgate House.