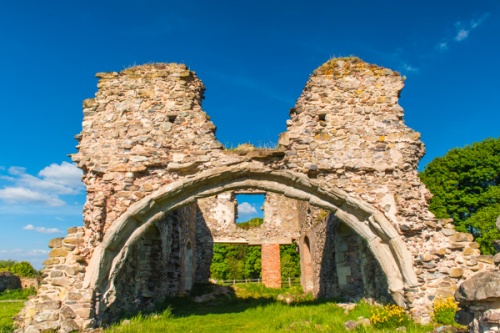 Grace Dieu was founded in 1235 as an Augustinian nunnery, and was dissolved by Henry VIII in 1538. The site is surrounded by earthworks that suggest fish ponds and is known for its resident ghost(s).

The exact date that the priory was founded appears uncertain, but it was probably between 1235-1241. The founder was Rohese/Roesia (Rose) de Verdon, who granted income from the manors of Belton and Kirby to provide for a community of canonesses dedicated to the Holy Trinity and St Mary. De Verdon was the daughter of Nicholas de Verdon, who owned estates near Belton.

The priory's charter was confirmed by Bishop Grosseteste in 1241. In the charter of confirmation the priory was described as "the church of the Holy Trinity of the Grace of God at Belton dedicated to God and St Mary".

In French, the 'Grace of God' translates as 'Grace Dieu', which gives the priory its popular name. In the field to the west of the priory is an ancient standing stone, suggesting that this was an area of some local spiritual significance long before the priory was founded. 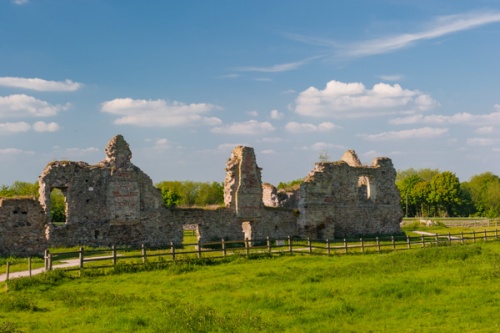 Rose de Verdon was buried before the altar in the priory chapel, which provision in her will for 12d to keep a light shining on her tomb in perpetuity. De Verdon's tomb and effigy were moved at some point to the parish church of St John the Baptist at Belton, where it can still be seen.

The community at Grace Dieu was under the rule of a prioress. The first prioress was Agnes de Gresley. We don't know much about her, but there are records that during the early years the spiritual state of the priory was suspect. Perhaps the first prioress was too lax, and in 1243 she was replaced by Mary de Streeton. An unusual provision was enacted requiring the nuns of Grace Dieu to never leave the priory precincts.

Grace Dieu received a grant of over 100 acres in 1306 from John Comyn, Earl of Buchan and Lord of Whitwick. By 1377 a hospital for 12 poor people had been added to the nun's quarters at Grace Dieu.

The priory was never wealthy; in 1535 its wealth was assessed at 92 pounds, but in the following year Henry VIII's commissioners valued its net income at 72 13s 4d. Because of its low income, Grace Dieu might have been dissolved in the first round of Henry VIII's Dissolution of the Monasteries as a 'lesser house', but it was reprieved. The reprieve was brief, however, and Grace Dieu was dissolved in 1538. 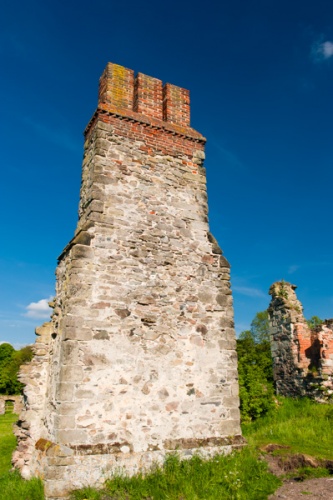 One of the commissioners who had valued the priory so low was John Beaumont. Beaumont purchased the priory after it was dissolved, and converted it to a private manor house. Did he intentionally undervalue the property so he could snatch a bargain? We can't say for certain, but it would not be unusual for the times!

Perhaps we can guess the answer by what followed; Beaumont became Master of the Rolls in 1550, but he was found guilty of abusing his position for gain, and his estates were seized by the crown.

Beaumont's descendants held the property - with one brief interlude - until the late 17th century. Sir Ambrose Phillipps of Garendon Abbey bought the property in the early 1690s, but by 1696 most of the manor buildings were demolished, leaving only a few fireplaces and a set of three Tudor chimneys still standing.

The site became a romantic ruin, frequented by artists and poets. One famous visitor the Grace Dieu was poet Wiliam Wordsworth, who stayed at nearby Coleorton Hall, who wrote poignantly about the 'ivied ruins of forlorn Grace Dieu'.

The standing ruins include the east end of the 13th-century church, parts of the east range, and the exterior wall of the south range. The most impressive feature is the chapter house, entered via a sturdy stone arch.

Several 16th-century fireplaces have survived from when the site was a mansion house. Beyond the standing walls of the south range are partial walls of another building which may have been the kitchens, and several free-standing columns of masonry and brick from the mansion period.

In 2012 investigation near the railway line revealed ruins of buildings which may be an infirmary and guest houses. 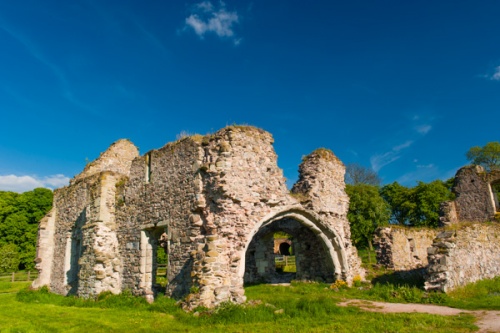 The Chapter House and east range

The priory has a reputation as one of the most haunted places in Leicestershire. According to one story, a 16th-century prioress named Agnes Litherland had an illegitimate child. When her sin was discovered the child was drowned in the nearby fishpond, and the prioress walled up inside the priory.

To this day the prioress's ghost wanders the ruins, searching for her lost baby. Sightings of this 'White Lady' say she has no hands or feet, a floats over the ground. Curiously, the ruins are said to be haunted by women dressed in white, but also in grey. There are regular ghost walks around the priory (see the official website).

The best way to visit is to park in the signposted parking area behind the Boar's Head inn and follow the signposted trail. The route winds through attractive woodland, passes under the railway several times, and emerges after 10 minutes or so at the priory.

At first glance it appears there is no information panel on the site; there is, but it's not easy to find. The panel is on the far (eastern) side of the chapter house wall.

The most impressive features of the site are the wide arch supporting the west end of the chapter house and the number of Tudor fireplaces that survive from John Beaumont's mansion house. 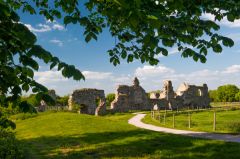 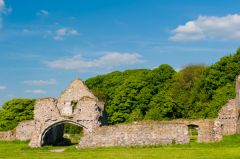 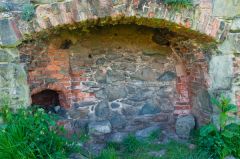 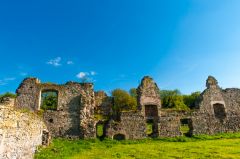 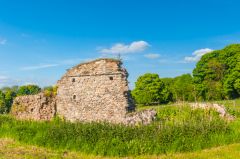 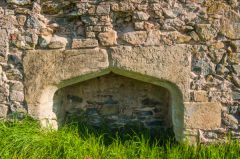