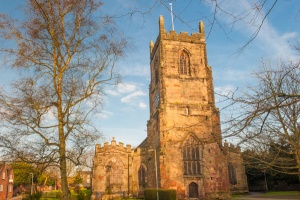 St Helens stands almost literally in the shadow of nearby Ashby de la Zouch Castle, and the history of each is intertwined with the other. There is no question which of the two has the oldest roots, for the Domesday Book of 1086 records a priest at Ashby, and we know that he served a church dedicated to St Helen.

He was an active fellow, this priest, for it is written that as soon as the sun woke his few parishioners he summoned them to prayer. That 11th-century church consisted of nothing more than a nave.

There are few written records mentioning St Helens until the 1470s, but the things start to get very interesting. William, Lord Hastings, Lord Chancellor to Edward IV and lord of the manor of Ashby, launched a huge rebuilding program, turning the ancient manor at Ashby into a luxurious modern castle, suitable for the residence of one of the most powerful men in the land.

Now, a powerful lord like Sir William needed to show that he was pious as well as wealthy, and Hastings lavished money not only on his castle but on the parish church beside it.

The church was greatly expanded, taking on the shape we see today, with a nave, chancel, grand west tower, and vestry. Hastings also built a special family chapel, which holds some beautiful and impressive memorials to the lords of Ashby. 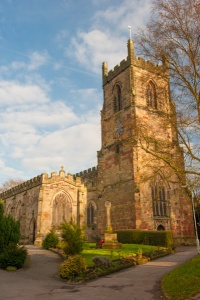 St Helens is built with a mix of local reddish sandstone and limestone, which glows gloriously in late evening sunlight. That same sun streams through a high clerestory and illuminates a beautiful Tudor roof.

As wonderful as the sight is, it seems quite likely that Hastings never saw it complete, for Edward IV died in 1483 and the king's brother, Richard, Duke of Gloucester, soon to be Richard III, had Hastings summarily executed for treason. But the effect of Hastin's rebuilding was to create a wonderful building with numerous fascinating historical features.

One feature that Hastings definitely did not see is the striking Victorian font, made of alabaster and designed by Earp of Lambeth in 1878. Look to the right of the font and there you will find a curious object made of two pieces of horizontal wooden blocks, hinged at one end.

This is a finger pillory, for punishing 'indecorous behaviour' without the unnecessary and public degradation associated with outdoor stocks.

Essentially it pinched the fingers of an offender so he couldn't get away, and was forced to stand by the wall until set free. There is only one other known example of a finger pillory in England, in a private manor in Wiltshire where it was used to discipline servants. 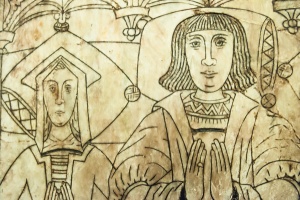 Close to the font, set against the west wall, is a wonderful alabaster slab incised with the likeness of Robert Mundi (d. 1526) and his two wives, both named Elizabeth. In his will, Mundi left a house in Ashby to the church in exchange for a requiem to be said in perpetuity for his soul and those of his wives.

Over the south door, somewhat lost in the shadows, is a lovely bust of Margery Wright (d. 1623). She wears a pretty early 17th-century outfit with a ruffed collar, Like Mundi, she left money when she died, but in her case, it was a bit more earthly and practical; she gave £43 to purchase gowns each year for aged and poor people of the town.

Another memorial to a local woman of note is in the chancel, where there is a brass to Selina, Countess of Huntingdon (1707-1791). The Countess founded the evangelical movement known as the Countess of Huntingdon's Connexion, which still trains ministers for missionary work. She established no less than 64 chapels during her lifetime, of which 23 still remain operational. 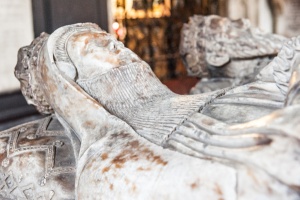 To the right of the Countess's memorial brass is the striking Hastings Chapel, built on the orders of William, Lord Hastings. There are thought to be three family vaults under the chapel and the chancel, but these were closed in 1846 and are no longer used for burials.

In the centre of the Hastings Chapel, and dominating the entire space, is a magnificent alabaster tomb chest to Francis, the 2nd Earl of Huntingdon (1513-1561), and his wife Katherine, niece of Cardinal Pole.

Across the chancel opposite the Hastings Chapel and above the vestry, is a small chamber known as the Priest's Room, which may have been set aside for a priest to watch over the high altar and the chapel.

But the Hastings Chapel is not the only chapel of note. At the east end of the north aisle is The Chapel of St Michael and All Angels, which is primarily used as a memorial to WWII servicemen and women.

Within the chapel, against the north wall, is a canopied tomb niche, and within the niche rests a worn 15th-century effigy known simply as The Pilgrim. This is traditionally said to be the effigy of Thomas, third brother of William, Lord Hastings. 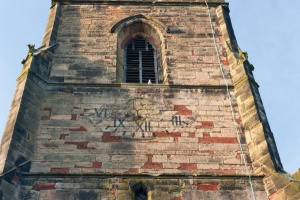 There are several more features of note outside the church. The first is the hardest to see; high on the south side of the tower is an unusual semi-circular sundial. This is thought to be the oldest extant sundial of its kind in England. There is a metal gnomon in the shape of a handle and raised moulding below and to the side. The sundial must have been situated so that it could be clearly seen from the castle.

The other interesting historical feature sits atop the church gates onto South Street. There, flanking the entrance, are a pair of skull and crossbones symbols in stone. This is supposed to be a sign that plague pits are located nearby; mass graves where victims of the bubonic plague were buried.

A local account says that 'dozens died in Ashby' of the plague at the time of the Civil War, and that the burial pits were located near the vicarage. To an illiterate or partly-literate population, the skull and crossed bones might have been the equivalent of a modern triangular warning sign, say, for toxic chemical waste, and they would certainly be wary!

An absolutely delightful church, full of historic interest. The Hastings Chapel is a gem, with wonderful memorials. We showed up just before a service that we hadn't known about, but the welcomers chatted to us, gave us time to look around and take photos, and even handed us a church guide for free. They certainly lived up to their calling and made us feel very welcome indeed!

NB. Make sure you head for the correct church! There are two Anglican churches in Ashby - the more modern one is Holy Trinity, plus a rather striking Catholic church opposite the tall memorial cross. St Helens is the ancient church beside Ashby Castle. 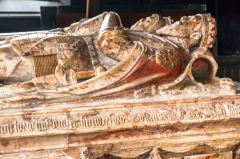 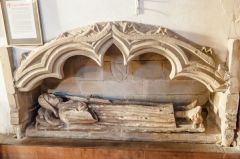