Godinton is a lovely brick manor with roots going back to the 14th century. Godinton was for centuries the home of the Toke family, and much of the present house owes its form to work undertaken by Captain Nicholas Toke beginning in 1620.

The interior includes a stunning medieval great hall with a hammerbeam roof, and a 17th-century great chamber with ornate Georgian panelling.

The first house at Godinton may have been built around 1165. This date is shown on a stained glass window in the hall. The house was restored in 1448, around the time the Toke family came into possession of Godinton. In 1620-28 Nicholas Toke extended the medieval building to create an L-shaped manor house clad in red brick, with a symmetrical front facade in Dutch style.

He incorporated the medieval hall of the earlier house and retained fittings like the richly carved 1520s linenfold panelling and marble chimney pieces. There is more carved panelling from around 1630 in the Great Chamber. In the Chamber is a frieze showing soldiers drilling. Above the hall is the chapel, which was originally a solar, or private family quarters. 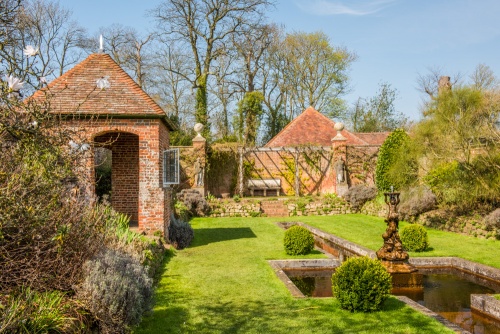 Though the great hall and great chamber deservedly get most of the attention at Godinton, there are other excellent period features, including a carved Jacobean staircase with heraldic beasts decorating the newel posts, and The White Room, with a plaster ceiling designed by Sir Reginald Blomfield. The interiors are full of fine furniture and historical collections of porcelain.

The house can only be viewed by guided tours, but you are then free to explore the 12 acres of gardens at your leisure. Unfortunately, we were not allowed to take interior photos on our visit, which is a shame because the house interiors are stunning. The gardens were designed by Blomfield in 1895 and are his first major garden commission. The result is primarily an Arts and Crafts layout, with separate garden rooms on varying colour schemes. From the formal gardens, you can look out onto the 18th-century parkland beyond.

Though the formality of the late Victorian design has been softened over time, the essentials remain, including formal yew hedges and topiary, water features and wide lawns, balanced by a wild garden, a walled garden still with its original greenhouses, a delphinium collection, rose garden, Italianate garden, and a profusion of daffodils in early spring.

Godinton is one of the best-kept secrets in Kent and deserves much greater attention. The gardens are among the finest in southern England, and the setting beside the lovely Jacobean mansion is wonderful.

Garden: Lovely formal and informal gardens surround the Jacobean manor of Godinton House. There is much variety here, including an 18th-century walled garden, Italianate garden, formal topiary, and a wild garden. Best in: spring, for daffodils and wildflowers in the Wild Garden. More self catering near Godinton House and Gardens >>

More bed and breakfasts near Godinton House and Gardens >>