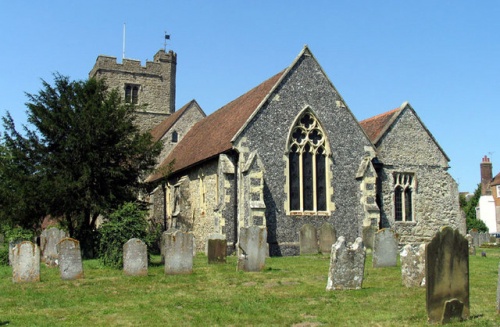 The attractive Kent village of Lenham stands on the southern edge of the North Downs, just a short distance from the popular North Downs Way long-distance trail. In the centre of the village, just off the cobbled market square, stands the historic parish church of St Mary.

There has been a church here since the Saxon period but the oldest part of the present building dates to the 12th century. The tower dates to the late 14th century and boasts a ring of 8 bells. The oldest bell was cast in 1592 by Robert Mot.

In 1297 arsonists set fire to the Norman building, badly damaging the church and destroying its tithe barns. The arsonists were never caught, and in the following year, Archbishop Winchelsea of Canterbury came to Lenham in person to pronounce a sentence of excommunication on them.

The post-fire building, including the entire nave, dates to the 14th century and is in Early English style. Later in the 14th century, a north aisle was added and the present vestry was built in the 15th century. 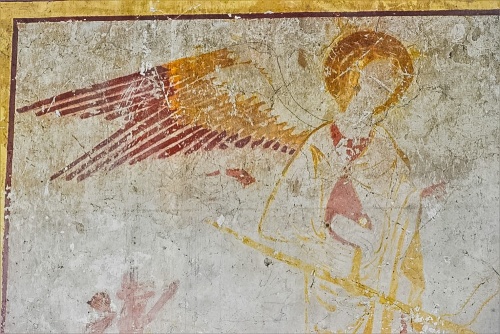 St Edmund's Chapel altar is carved from Bethersden marble and originally served as the tomb of Thomas Horne (d 1471). The Horne family coat of arms also appears on an arch pillar between the chapel and north aisle. Also in the chapel is a memorial to Viscount Chilston of Chilston Park, whose family held the right of presentation for centuries.

The high altar is medieval. It was hidden under the sanctuary floor during the Reformation and only rediscovered in the early 20th century. On the altar are 18th-century candlesticks and a cross.

In the window splay of the south sanctuary window is a fragment of a 14th-century mural depicting a bishop. Set into the north wall is the effigy of a 14th-century priest thought to be Thomas de Apuldefelde, rather oddly divided into two halves by a stone partition.

Against the south wall is a 13th-century sedilia, or stone seat for clergy that survived the 1297 fire. It is set under a 14th-century canopy. Also in the chancel are 15th-century choir stalls with misericords, probably brought here from another church.

The richly carved pulpit dates to 1574 and is one of the finest in Kent. Above it is a sounding board added in 1622. The panelled lectern probably dates to the same period. It features an unusual swinging head. Some historians think it is not a lectern at all but a rare early 16th-century music desk 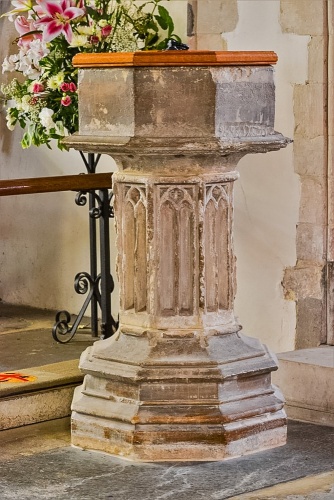 The pulpit was a gift of Mary Honywood, who died in 1620 at the age of 92. That was a ripe old age for the time. At her death, Mary left behind 16 children, 114 grandchildren, 228 great-grandchildren, and 9 great-great-grandchildren. That makes a quite astonishing total of 367 descendants. The story is recounted in the epitaph of her grandson Robert Thompson set into the floor on the north side of the altar.

On the south nave wall is a well-preserved 14th-century wall painting depicting St Michael weighing souls. You can clearly see a devil on one scale trying to bring it down, while the other scale is raised up by the Virgin Mary's rosary beads.

The beautifully carved octagonal font dates to the 15th century. Look for a royal coat of arms to Queen Anne over the north door, dated 1705.

There is more history to enjoy outside the church; the lych gate separating the churchyard from Church Square is a copy of the original 15th-century gateway. At that time there was a monastery attached to the church. The last vestige of the monastery is the building at no. 4-7 Church Square, which is thought to have provided housing for clerics working on the monastic farm.

The monks worshipped in St Edmund's Chapel in the church. Look for a heavy stone jamb and doorway in the easternmost cottage. The stones formed part of the medieval gateway into the monastery complex.

One former vicar of Lenham was Edward Bridges, a relative by marriage of author Jane Austen.

As far as we have been able to determine St Mary's is regularly open to visitors.

All photos are (c) as marked, republished with gratitude under a Creative Commons license.