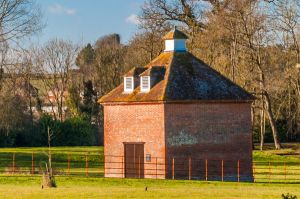 Netheravon Dovecote is a Grade-II listed brick 18th-century dovecote, beside the River Avon, in the grounds of Netheravon House. There are more than 700 original chalk nesting boxes in the dovecote. Unfortunately, the interior cannot normally be viewed.

Netheravon House was built after 1734 by the Dukes of Beaufort, who used it as a hunting box for hawking and coursing on the nearby downland. To feed the household, they erected a square dovecote on low-lying land below the house.

The dovecote is built using the Flemish bond style of construction (that is, alternating header and stretcher bricks) and is topped with a plain square-hipped tile roof in a pyramid style, with a modern cupola on top and two dormer windows. There is only one entrance; on the south side, with a 20th-century door with slats for ventilation.

Most of the original chalk nesting boxes have survived intact, save for the lower tiers. One slightly unusual feature is that the boxes are not incorporated into the wall but made of coarse bricks set against the wall in a chequerboard pattern, creating L-shaped boxes about 9 inches high.

There are very few historic dovecotes in Wiltshire. One other that we've visited is at Avebury, and it couldn't be more different to the Netheravon one. At Avebury, the dovecote is circular, with a conical roof, and made of rough stone. Here at Netheravon, the design is very typical of 18th-century architecture; simple, elegant, and stylish.

The dovecote itself is on private land, so you can only view it from outside the fence that encloses the field. Park at the church, easily found beside Netheravon House. From the church car park, you can easily see the dovecote in the adjoining field. You can walk back down the lane to a gate that lets you into a public park, and from there follow the very obvious fence for a close view of the rear face of the dovecote.

You can see the front of the building from the top of the churchyard if you can convince tree branches to stay out of the way. Its a real shame that there is no closer access to the site, but at least you can easily view the dovecote from the surrounding fields as there are no other buildings nearby. The closest you can get is about 20 metres.

Don't miss the wonderful historic church while you're visiting Netheravon. It dates to at least the 11th century and very probably to before the Norman Conquest. 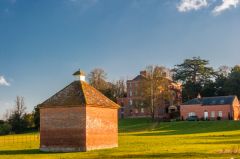 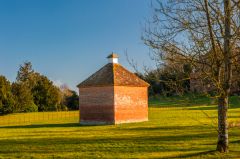 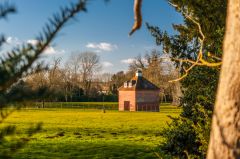 More self catering near Netheravon Dovecote >>

The Stonehenge Inn and Carvery - 2.4 miles
Durrington, Wiltshire
From: £40.00