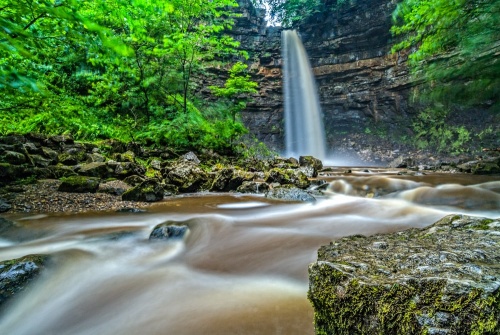 Hardraw Force is a picturesque waterfall in Wensleydale, in the heart of the Yorkshire Dales National Park. The waterfall is located on Hardraw Beck just north of Hawes.

The waterfall is one of the most impressive in northern England, especially after a heavy rain. The water falls straight down a 100-foot drop to a pool below. This is the highest single drop above ground in England. The water flows over a cliff formed from an exposed limestone bed. The limestone forms thick layers which can be seen exposed on the cliffs.

Unlike most waterfalls, Hardraw Force is on private land and there is an admission fee payable. As of this writing, the entrance fee is £3.00 per adult. The fee goes towards maintaining access routes to the waterfall, which is necessary because this is such a popular visitor destination. 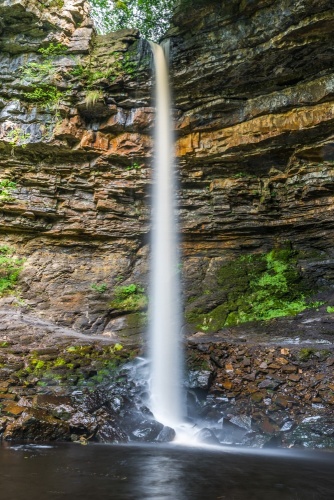 The name 'Hardraw' comes from the Old English term for a shepherd's dwelling. The land here was once part of a grange, or outlying farm owned by the Cistercian monks of Jervaulx, who raised sheep. They probably maintained a grange and a small chapel near the waterfall.

In the late Victorian period, the Hardraw estate was owned by Lord Wharncliffe, who built pathways beside Hardraw Beck to the base of the waterfall. footbridges carried the paths across the beck and linked the waterfall and the pub with Shaw Gill Falls and Lord Wharncliffe's shooting lodge at Simonstone Hall to the north. 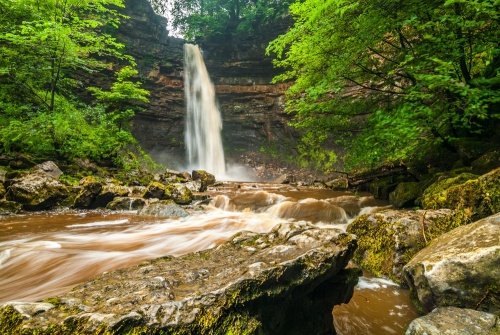 The waterfall after a heavy rain

In 1899 a flood washed away the top of the cliff and turned the 100-foot drop into a gentle cascade. Lord Wharncliffe was annoyed at losing the title of the highest single drop of any waterfall in England so he told his estate manager to 'put it all back'. The estate manager hired stonemasons and had the cliff rebuilt in its present form. So what you see today is Lord Wharnclffe's restoration.

In 1913 Lord Wharncliffe sold the estate to pay for his son's 21st birthday celebrations.

Behind the Green Dragon is the Hardraw Heritage Centre, where you can find out about the history of the area, see contemporary art in the 1816 Gallery, and enjoy refreshments in the tea room. The acoustics of the gorge make Hardraw Force a destination for musicians, and for many years an annual brass band competition was held here in September. 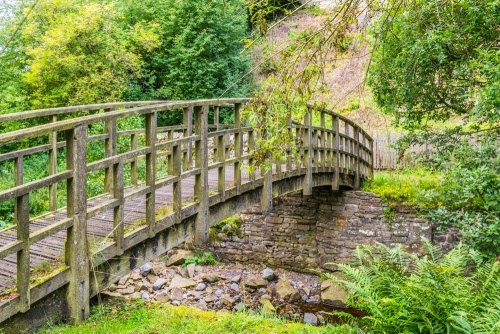 A footbridge over the beck

Hardraw Force was a popular destination for artists from the late 18th century. The most famous of these artists was JMW Turner, who stayed at the Green Dragon for four days in 1816 while sketching the waterfall and making drawings of Mossdale Head. He later reworked the waterfall sketches into a painting entitled Hardraw Falls, which is now held at the Fitzwilliam Museum in Cambridge. Another visitor was the poet William Wordsworth, who came in 1799 and later described the falls in his 'Guide to the Lakes'.

More recently, the falls were used as a setting for Kevin Costner's film 'Robin Hood: Prince of Thieves'.

We've visited Hardraw Force several times, and how impressive you find the waterfall really depends on how much rain there has been. On one occasion the water gushed over the lip of the cliff in a torrent, while the next time it was a gentle flow. In either case, it is a lovely location and the walk along the beck is beautiful. 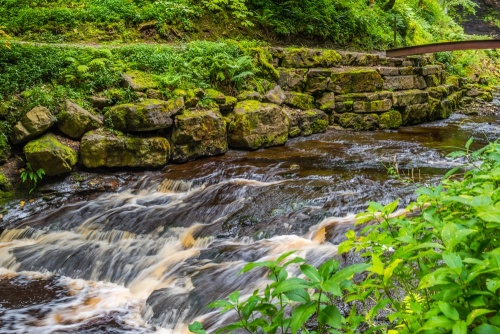 The waterfall entrance is beside the Green Dragon in Hardraw, on a minor road north of Hawes. Though several public footpaths skirt the site the only access is by paying the entrance fee. The Pennine Way long-distance trail runs through Hardraw village and on to Hawes, so if you fancy a longer walk you can park at the visitor centre in Hawes and follow the Pennine Way to Hardraw.

Self Catering near Hawes