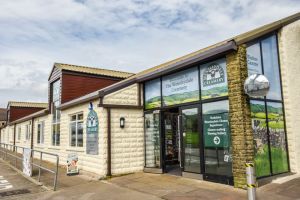 Wensleydale Creamery Visitor Centre
How can you pass this up? Wensleydale's world-famous cheese has a museum tracing the development of the cheese from monastic times to the present, a viewing gallery, so you can look in as the cheese is prepared, free tasting, and a fine cheese shop.

In the 12th century, a group of Cistercian monks settled in Wensleydale and developed a technique for making a soft, crumbly cheese. The technique was carried on and developed by local farmers' wives over centuries and became a local tradition. It was not until 1897 that the first official creamery opened in Hawes to produce Wensleydale cheese in large quantities for sale outside the area.

Though the creamery may be modern, Wensleydale cheese is hand-made, as it always has been.

Wensleydale cheese has been awarded Protected Geographical Indication (PGI) status. That means that no cheese-maker outside Wensleydale can produce a cheese and call it Yorkshire Wensleydale. The PGI status is an internationally recognised seal of provenance, a way of recognising the unique heritage and quality of Wensleydale cheese.

Visitors can learn how cheese is made, watch skilled workers create real Wensleydale using traditional methods, and taste the result for themselves. The creamery museum traces the history of cheese making over the centuries, with historic equipment, a recreated farmhouse kitchen and dairy, demonstrations of cheese making, and of course, film clips of everyone's favourite cheese connoisseurs, Wallace and Gromit.

The Creamery has won over 400 awards in just the past decade, both in Britain and Internationally.

There is a parking area quite near the visitor centre, or you can enjoy a short stroll from the centre of Hawes.