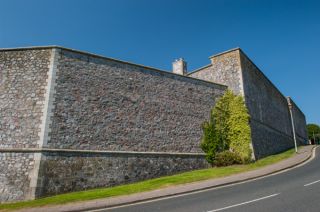 The fort was composed of a chapel, storehouse, baracks, stables, guardhouse, powder store, and captain's lodging. In the following century Drake's Fort was expanded and incorporated into a much larger bastioned artillery fort with earthwork defences.

The Citadel was accessed via a grand Baroque entrance designed by Sir Thomas Fitch, which is accounted one of the finest such designs in England.

The fort overlooks the entrance to Cattewater and Plymouth Sound. Access is by guided tour only. Tours are led by registered Blue Badge Guides. Discounted entry to English Heritage members.

More self catering near Royal Citadel >>

Situated towards the end of a small park of around a dozen lodges this property enjoys a rural location within easy walking distance of the bustling village. Newton Ferrers boasts …
Sleeps 6

This immaculate single storey cottage is in an incredible setting and sleeps up to two people in one bedroom.
Sleeps 2