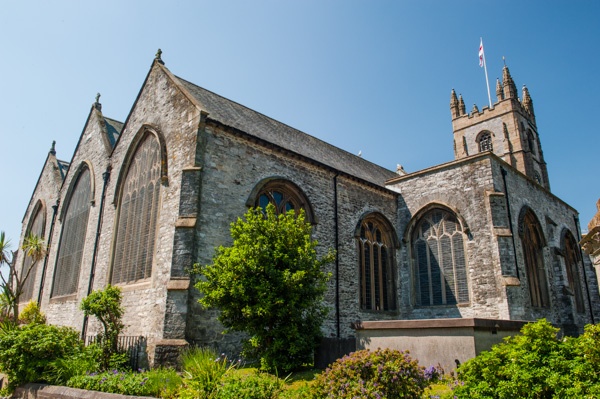 The story of Plymouth Minster is a mix of ancient roots and modern tumult. The origins go back to the 8th century when a small group of Christian settlers set up a religious community on a hill overlooking Sutton Harbour. They built a farmhouse and a small church nearby.

The church later became what we know as St Andrews, and the community is no longer called Sutton, but was combined with neighbouring villages to form the town of Plymouth.

The right to appoint the vicar of the church was later granted to the Prior of Plympton, which was founded by King Edgar in 961AD. The earliest record of a named priest dates to shortly before the year 1100AD, during the reign of William II.

A stone church replaced the Saxon one sometime in the early 12th century. A survey was carried out during the pontificate of Pope Nicholas in 1291, and it seems likely that a crypt beneath the present chancel dates to the late 13th century. Over the ensuing centuries the town of Plymouth expanded, and the church could no longer serve the growing population.

In 1390 a south aisle was added to the chancel by John Edenes, but beginning around 1430 a new north aisle in Perpendicular style was begun. Around 1460 the beautifully decorated west tower was built. This was a joint project between the town of Plymouth, which gave the materials, and a merchant named Thomas Yogge, who paid for the labour.

Yogge also paid for a new Lady Chapel on the north of the church. With all the 15th century work carried out on St Andrews, what we see today is almost entirely Perpendicular in style. In 1501 Katherine of Aragon, on her way to England to marry Arthur, Prince of Wales, landed at Plymouth after a difficult voyage across the Channel. She went in state to St Andrew's to give thanks for her safe arrival. 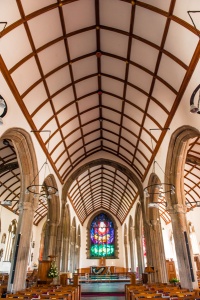 Looking up the rebuilt nave

After the split from Rome engineered by Katherine's second husband, Henry VIII, the crown claimed the right to appoint the vicar. In 1572 Queen Elizabeth sold the right back to the burgesses of Plymouth.

One of Plymouth's most famous sons, Sir Francis Drake, had rather a more pleasant arrival. He sailed back into Plymouth from his successful voyage to Nombre de Dios on Sunday, 9 August, 1573. When news of his arrival reached St Andrews there was a service underway, but the congregation left the church and sped to the harbour to welcome Drake home.

In 1634 Charles I, never the most diplomatic when it came to asserting what he considered his rights as monarch, decided that he would appoint a new vicar of St Andrews. He named Dr Aaron Wilson, a Royalist supporter.

The townsfolk put up with the unpopular Wilson initially, but when Civil War broke out in 1642 Dr Wilson was cast into prison on Drake's Island, in Plymouth harbour. The town then appointed a Protestant vicar in Wilson's place.

When the monarchy was restored the townsfolk of Plymouth must have feared retribution, but they petitioned Charles II for the right to build a new church, over which they would have the right of the living, and sweetened the petition by calling the new foundation Charles Church.

St Andrews was restored in the early 19th century by John Foulston, and again in 1875 by the ubiquitous Sir George Gilbert Scott, but it was the final restoration that shaped the Minster we see today. 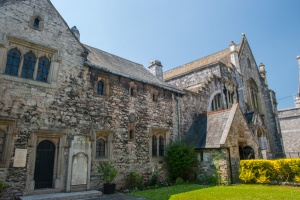 On succeeding nights of 20 and 21 March 1941 German bombs struck the centre of Plymouth. St Andrews was left a roofless shell, and the chancel was completely destroyed. Next morning, someone placed a wooden notice board over the south entrance, and on it a single word 'Resurgam', Latin for 'I will rise again'. The same simple message is now carved over the main entrance doorway, dubbed for obvious reasons 'The Resurgam Door'.

For indeed, this fine church has risen, like a phoenix from the ashes. From 1942-1949 it was a 'garden church', a roofless space with regular outdoor services during the summer months.

After the war a new restoration project was undertaken under the direction of architect Sir Frederick Etchells, and St Andrews was re-consecrated on St Andrew's Day, 30 November 1957. Finally, in 2009 St Andrews was officially named a minster church, and it is the largest parish church in Devon.

Though all the stained glass windows in the church are modern, they are well worth a mention. There are six large windows, designed by John Piper and executed by Patrick Reyntiens.

Perhaps the most interesting is the east window, dedicated to the memory of Lady Astor, the first female MP to take her seat in Parliament in 1919 (technically Countess Constance Markievicz was the first MP elected, but as a member of Sinn Fein she did not take up her seat).

A north transept window has a vividly coloured window based on a theme of inspiration and music, and is dedicated to Dr Harry Moreton, organist here from 1885-1961. 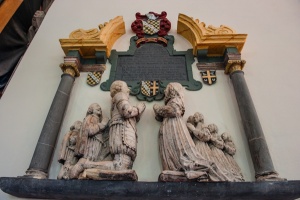 Other highlights of the interior include a painted wall monument to John Sparke (d. 1640) and his wife Deborah (d. 1638). At the south-east corner of the chancel is a bust of Zachary Mudge, vicar of St Andrews from 1731-1769.

Just west of the main (Resurgam) door is a memorial to the Fownes family, dated 1606-38. In the north chapel is a memorial to Sir Martin Frobisher, the explorer (d. 1594), and Admiral Rober Blake (d. 1657). Blake was originally buried at Westminster Abbey, but after the Restoration of the Monarchy his remains were dug up and reburied in a pit at St Andrews.

The oldest intact part of the Minster cannot be found inside the church at all, but to the north, where the late 15th-century building known as Prysten House stands, relatively untouched by time despite the destruction meted out on the main church building. Prysten House, also known simply as The Abbey, was built by the Priory of Plympton as a lodging for the priest serving St Andrews and the nearby church of St Katherine upon the Hoe.

After the Dissolution of the Monasteries, the building was sold into private hands and was used for a time by a grocery company. In 1919 it was repurchased by the church as a hall and chapter room for church administration.

The main entrance into Prysten House is known as the Door of Unity, in honour of the close connections between Plymouth and the United States. The most obvious connection, of course, comes from the fact that the first 'Pilgrim Fathers' sailed from Plymouth, but there is another, lesser-known connection, symbolised by the simple white memorial set into the wall of Prysten House.

The memorial is to Captain William Allen and midshipman Richard Delphey, American sailors killed in action during the closing stages of the War of 1812. The sailors were serving with an American ship that engaged with a British naval vessel outside Plymouth. Delphey died in the battle, while Allen survived for a brief time and was treated by a British surgeon named George Magrath.

Both Magrath and the people of Plymouth treated the Americans kindly, and naval troops stationed in Plymouth buried the pair at St Andrews with full military honours. In 1930 a permanent memorial was set up by the American organisation, 'Daughters of 1812', with an inscription giving thanks for the 'humane and chivalrous action of the English people'.

When I visited St Andrews a very friendly volunteer guide attached himself to me and explained the history of the site and pointed out interesting bits of the building. He told me that when the German bombs hit in 1941 he was a small child, living only a few blocks away. He recalled the noise, and plaster falling off the ceiling of his bedroom.

In a very matter-of-fact voice he told me that his uncle was killed in the bombing. He didn't show any anger or resentment, he just told me what happened, and recalled how the streets were filled with rubble after the bombs had stopped.

Clearly, though the church has been restored and is now a beautiful, spacious building, filled with light, the memory of those terrible events and the aftermath of the bombing have left their mark on the people of Plymouth. It is hard to visit a church like Plymouth Minster and not be moved. 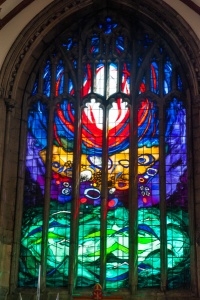 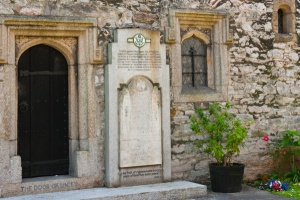 The Unity Door and Prysten House 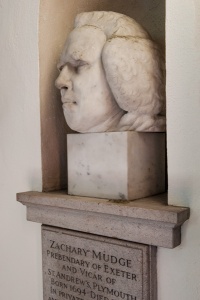 More self catering near Plymouth Minster

Self Catering near Plymouth

The Coastguard Cottage
Plymouth
Sleeps 8, from £735.00