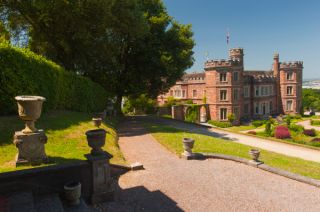 17th-century diarist Samuel Pepys called Mount Edgcumbe "The Most Beautiful Place As Ever Was Seen". This early Elizabethan mansion with views of Plymouth was built for the Earls of Mount Edgcumbe. The interior features portraits by Sir Joshua Reynolds and a collection of 16th-century tapestries, with period furniture throughout.

There are really two parts to Mount Edgcumbe; the stately home, with the small, formal Earl's Garden surrounding it, and the glorious expanse of Mount Edgcumbe Country Park which takes up some 865 acres on the most south-easterly point of the Rame Peninsula. Within the country park is the Formal Gardens, a walled area of formal garden 'rooms' each separate and unique in character. 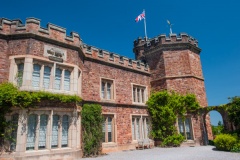 The Edgcumbe family-owned land opposite Plymouth since 1354, but it was not until 1547 that they began to build a grand new house here. The Edgcumbes had lived at Cotehele, further inland, for centuries, but the wealthy family wanted a new house that would reflect their status - and be more comfortable than medieval Cotehele! The new house at Mount Edgcumbe was innovative, a sign of the more peaceful and prosperous Egland of the Elizabethan period.

For while previous generations of wealthy families built houses that faced inward, huddling about a central courtyard, keeping the world at bay, Mount Edgcumbe faced outward, taking advantage of the long, sloping hill with views across the Sound to Plymouth, and showcasing the confidence and wealth of the Edgcumbes.

This was a new type of house, built more for comfort and show than for defence. It was an indication of a major social shift, a change that was to revolutionise English architecture - at least as it concerned the showpiece homes of the wealthy nobility.

The Edgcumbes built a banqueting hall beside the house, but this was damaged during the Civil War. But the real change to Mount Edgcumbe came in 1941, when a German bomb, probably intended for military targets in Plymouth, struck the house and left it a shell. The house was completely gutted. If you see the photos of the aftermath on display in the house you may wonder how there is anything left to see at all, so complete was the devastation.

The 6th Earl was faced with a major decision; should he rebuild the house or let it decay? He chose to rebuild, a project that began in 1951. But the end was near. In 1971 the 7th Earl sold the Mount Edgcumbe estate to the Cornwall County Council and Plymouth City Council jointly. The estate grounds were turned into a country park, complete with follies and grottos built as part of the 18th-century landscaping of the gardens.

The house itself, and the formal terraced gardens immediately around it were filled with 18th-century furniture and paintings and opened to the public in 1988. Mount Edgcumbe has become one of the most popular tourist destinations in Cornwall, aided greatly by its location opposite Plymouth - and by the attractive coast and grounds within the park. 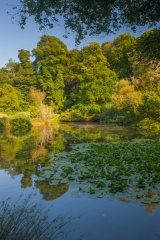 Amphitheatre pool
in the country park

It doesn't really take long to view the house; there are two floors of rooms, decorated in attractive 18th-century style, with portraits and objects relating to the area. Not so much a stately home as a museum, the interiors are beautiful without being overwhelming. There is a short video telling the story of the house and its rebirth, and pleasant walks amid the gardens close to the house.

While it won't take long to view the house, be prepared for a lot of walking if you want to explore the formal gardens and the country park! The formal gardens are not located beside the mansion as you might expect, but further down the hill, near the shore. These are best accessed from Cremyll car park rather than the main house car park unless you fancy extra walking.

The formal garden area is composed of several 'garden rooms', each with its own style, many separated by high hedges from each other. among the highlights are an Italian Garden (1750-1809), French Garden (1803), English Garden (1770), and a relatively recent 18th century rose garden. There is also a New Zealand garden and a delightful - and very surprising - Geyser, which erupts every 60 seconds and will startle the unsuspecting passer-by (well, it startled me!). 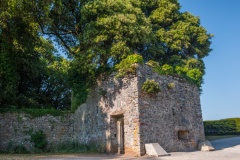 
Apart from the Formal Garden, there are literally miles of trails through the park and along the shore. On the eastern edge, facing Plymouth Sound, are several military buildings, including a curving battery with cannon trained across the harbour entrance.

The first battery here, called the Earls Battery, was built in 1747. This was extended in 1863 when the Garden Battery was added. Just inland of the battery is a small Tudor blockhouse erected in 1540.

Just north of the blockhouse is a rectangular bowling green built in 1670 and bounded by a huge hedge, called, not surprisingly, the Great Hedge.

The South West Coast Path runs along the shore from Rame Head in the west to Cremyll Ferry in the east. From Cremyll there is a regular ferry across the strait to Plymouth. This makes a great way to visit Plymouth on a day trip. Our family parked at Cremyll car park and purchased a round-trip ticket for the ferry plus bus travel that took us into the Plymouth town centre and back to the ferry at the end of our excursion.

Historic highlights within the country park include Maker church, situated at the highest point of land in the park, whose spire is a landmark for miles around. Unfortunately, the church has been the victim of vandalism lately and as a result, it was closed when we visited. Close by, and just outside the park, is Rame parish church and the medieval chapel on Rame Head.

Garden: There are two distinct gardens surrounding the romantic Elizabethan manor of Mount Edgcumbe. The first is The Earl's Garden, featuring rare trees, an unusual shell grotto, and a Victorian terrace overlooking Plymouth Sound. The second is a Formal Garden, in Italian, French, and English styles, with separate garden rooms featuring plants from New Zealand, and an American plantation. 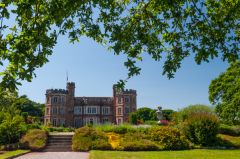 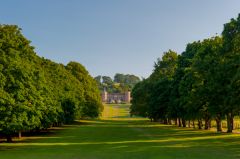 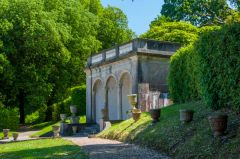 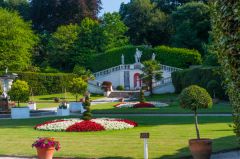 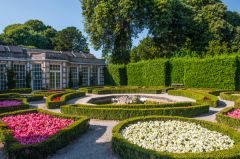 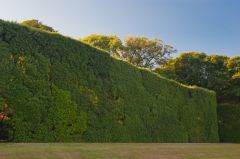 More self catering near Mount Edgecumbe House and Country Park >>