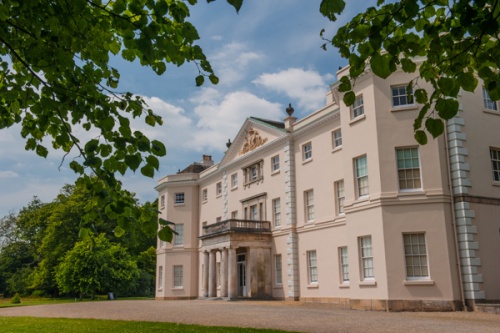 Saltram is located just three miles from the city of Plymouth, yet its location in 500 acres of parkland on the banks of the River Plym gives it a decided countryside air. There was a Tudor mansion on this spot, but the present exquisite mansion is almost entirely a product of the Georgian period.


In 1582 the Parker family purchased the Boringdon estate, on the edge of Plymouth. In 1712 George Parker bought the neighbouring estate of Saltram, but he still lived at Boringdon. It was left to George's son, John Parker, to move his family seat to Saltram, to take advantage of the superior views and more pleasing landscape.

There was a house on the site, an outdated 16th and 17th-century manor. Previous owners of Saltram included the Baggs family, one of whom notoriously embezzled money meant to outfit a fleet to attack Cadiz. The English ships were forced to put to sea unprovisioned, and over 4000 men died in the ensuing campaign.

Around 1743 Sir John and Lady Catherine Parker set to work transforming the earlier house into a fashionable Georgian residence. The exterior the created is subdued, even unremarkable, but the exterior hides an interior of opulent rooms enhanced by extraordinary plasterwork ceilings and walls.

Sir John and Lady Catherine's son, also named John, brought in Robert Adam in 1768, and Adam is responsible for the exquisite staterooms and the salon. Saltram represents one of the finest surviving works by the influential Adam, and some of his original architectural drawings can be seen at the house. 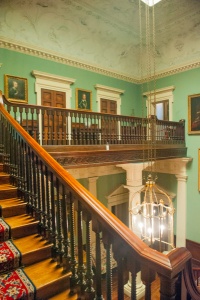 John Parker the younger moved in the highest social circles. He was an MP, a card-player and racing enthusiast. He counted among his friends the artist Sir Joshua Reynolds, a native of Plympton, not far from Saltram.

Despite this cultivated background, Parker was known for his broad Devon accent and manners that marked him as something of a country squire. Georgiana, Duchess of Devonshire, remarked after visiting Saltram that she found Parker 'as dirty, as comical, and talking as bad English as ever'. In 1789 Parker's heir loaned Saltram to George III and Queen Charlotte for a stay, and over 100 beds had to prepared for the royal retinue and guests.

A Failed Marriage and Family Tragedy

The heir was Lord Boringdon, dubbed unkindly 'The Boring Don'. Lord Boringdon's first wife left him to run away with Sir Arthur Paget, leaving her infant child behind. Boringdon sued for divorce and was awarded 10,000 pounds in damages.

The story does not end there, for just 9 years later the child ate a stalk of contaminated rye, and fell fatally ill. His mother hurried to his bedside to nurse him through his final days. Her ex-husband was there at the child's death-bed, but he pretended not to recognise her. This sad tale was later used by Mrs Henry Wood for the plot of her novel 'East Lynne'. 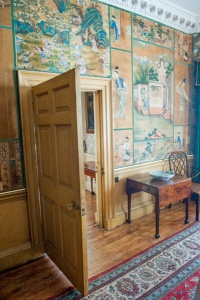 By this time Lord Boringdon was the Earl of Morley, a title he gained after purchasing the village of Morley, hoping to associate himself with the Parkers of that place, who had an older family line than his own.

He was, in fact, unrelated to the Morley Parkers at all. Morley had married again by this time, and though his new wife expressed herself delighted at her new home, her clergyman brother complained at the extreme simplicity of the house and the unceremonious household proceedings.

Perhaps Morley had to live simply if one can judge by the fact that he left a mortgage of over 250,000 pounds when he died in 1840; a huge sum at the time. But things improved when the 3rd Earl married into money. He not only rescued Saltram from being let out to tenants but served as an MP, rising to become Speaker of the House of Lords.

The 4th and 5th Earls lived very simply at Saltram, leaving the house unaltered by time and decidedly un-modernised. The main rooms remained lit by candles only until after World War II. When the 4th Earl died, the crippling cost of death duties meant that his brother and heir could no longer keep the property, so the house was gifted to the National Trust in 1957. 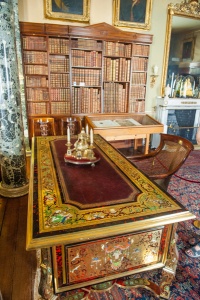 The exterior is stuccoed, and relatively plain, rising three storeys, with a sturdy entrance porch looking towards the coast. Inside, things look distinctly more opulent. The entrance hall is a showcase of stunning plasterwork, full of classical allusion. There is extensive ornate plasterwork throughout the house, and a startling amount of original hand-painted Chinese wallpaper.

The morning room and hall have intricate Italian plasterwork ceilings. The morning room has walls hung with Genoan red velvet, and much of the richly coloured wall space is hung with a glorious collection of paintings, including 5 by Joshua Reynolds.

The house maintains excellent collections of furniture, fine art, and china, as well as a number of portraits by Angelica Kauffman and Reynolds. Adam was responsible for the saloon and dining room, which feature paintings by Antonio Zucchi and marvellous plasterwork by Joseph Rose. 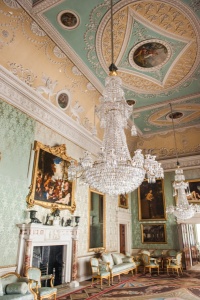 The saloon is especially impressive; it is a 'double-cube', with an Axminster carpet designed by Adam, who may also have created the gilded settees and chairs that line the walls. Adam also designed a series of striking picture frames as part of the wall decoration. That is, the frames are not hun on the walls, they 'are' the walls.

Above the fireplace hangs a copy of Titian's 'The Adrians', set within a frame designed by Thomas Chippendale. The staircase hall boasts some of the finest artwork at Saltram, with Stubbs' The Fall of Phaeton, The Duke of Medina, by Rubens, and several paintings by Angelica Kauffman.

The upstairs bedrooms feature some beautifully preserved Chinese wallpaper, with furniture by Chippendale. One room is hung with wonderfully detailed wallpaper depicting scenes from everyday life in China - or at least, a Westernised ideal of daily life in China, for Oriental wallpaper was usually made only for export.

Another fascinating chamber is the Mirror Room, hung with painted mirrors and original wallpaper. Perhaps the most impressive single item of furniture is a quite astounding gilded desk, believed to be crafted by Charles Boule in about 1700. This amazing piece of furniture is 1 of only 10 ever made, and is created of beech overlaid with brass, and inlaid with mother-of-pearl and ivory.

Less ostentatious than the showcase rooms but equally as impressive is the Great Kitchen, with its original 18th-century tools and furnishings.

There are formal 18th-century gardens surrounding the house, including follies, an orangery, and lovely old trees and flowering shrubs, as well as extensive landscaped parkland. Further away from the house are wooded walks along the river. In the grounds is the Chapel Art Gallery, a restored 19th-century chapel that now hosts regular art exhibitions during the summer months.

Saltram was Norland Park in the film adaptation of Jane Austen's Sense and Sensibility.

Because of its close proximity to Plymouth, Saltram can be very crowded on sunny summer weekends, or during school holidays. Many families seem to ignore the house and explore the extensive parkland, so once you get into the grounds near the house things can quiet down a bit! The house itself is an elegant gem; I was amazed at the beauty of the neo-classical decoration.

One unexpected pleasure was the kitchen; most stately homes have the kitchens tucked away in a deep, dark corner almost like a forgotten dungeon. At Saltram the kitchens are set on a very pleasant ground-floor courtyard, with large windows creating a real sense of light and space.

They would have been a very pleasant place to work! The gardens are not what I'd call extensive, but there are very pleasant walks down tree-lined, shady avenues, and the Castle Folly is an intriguing punctuation mark to the lime-walk. There's even a 'Melancholy Walk', which, despite the name, was actually quite enjoyable. 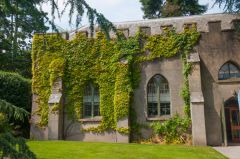 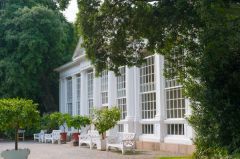 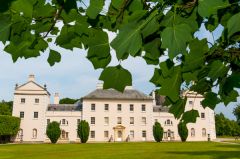 More self catering near Saltram

More bed and breakfasts near Saltram