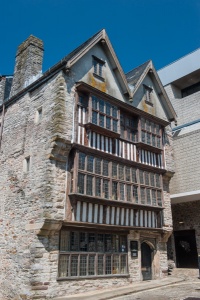 Tucked away from the bustle of modern Plymouth down a quiet side street is this attractive timber-framed house, probably built in the early 16th century and remodelled a century later. While we do not know exactly when the house was built, we know a lot about its first recorded owner, a privateer named William Parker.

Parker was that Elizabethan phenomenon, a respectable merchant and pirate, successfully combining a career as a merchant with privateering and civic government. Parker was a close friend of Plymouth's most famous privateer, Sir Francis Drake, and served as Lord Mayor of Plymouth from 1601-1602.

He served under Drake in 1588 in the fight against the Spanish Armada, and probably commanded a victualling ship named the Mary Rose (not the famous vessel built by Henry VII but another of the same name).

He launched raids against the Spanish in the Caribbean, but his big break came in 1601 when he captured a pair of treasure ships laden with 10,000 gold ducats. On his return to Plymouth, he was elected Lord Mayor, and he used the profits from his ventures to remodel an older house on this site into a fashionable timber-framed house suitable for a respected gentleman of the town.

He helped promote the Plymouth Company to colonise North America and took an active interest in the Virginia Colony. He died in 1618 on a voyage to the East Indies. 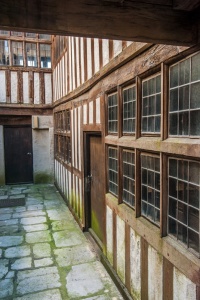 Parker's heirs lived here from 1617-1632, then it passed to Abraham Rowe, another successful merchant. In 1651 the house was purchased by Justinian Beard, ord Mayor of Plymouth on 2 occasions.

It was occupied by the Beele family until 1707, then by the Martyn family until 1807. In 1807 the building was extended to the rear (towards Finewell Street) and the front section used as a shop. In the 1960s it was used as a tex office then restored by the City Council and turned into a museum of local heritage, focussing on life in Plymouth over time.

Merchant's House is the finest surviving example of an Elizabethan house in Plymouth. There are seven rooms, and each room is themed to represent a distinct time period in Plymouth's history. Themes cover such topics as transport, commerce, and WWII, with a room set aside to recreate the Blitz experience. One of the rooms has been turned into a replica Victorian schoolroom.

Highlights of the historic objects on display include a 17th-century carved mantelpiece, a Victorian dollhouse, and a collection of 19th-century shop signs made with real gold paint. See objects connected with the justice system, like manacles used to detain prisoners and a ducking stool. The front room, where the family would entertain important guests, still features its huge original fireplace.

Merchant's House is a delight, a wonderful opportunity to look back at Plymouth's history in a house full of character. There is a very reasonable entrance fee, and discounts for children, seniors, and students.

The museum has been closed [temporarily, we hope] by the Plymouth City Council so that it can undergo extensive repair and restoration work. Please DO NOT make plans to visit! Of course, you can still enjoy viewing the exquisite building's timber-framed exterior at any time! 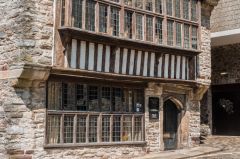 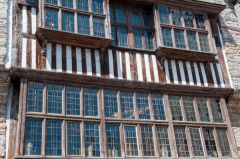 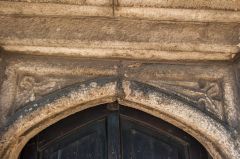 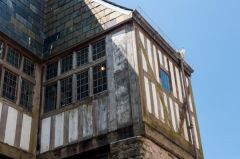 More self catering near Merchants House

Self Catering near Plymouth

The Coastguard Cottage
Plymouth
Sleeps 8, from £735.00