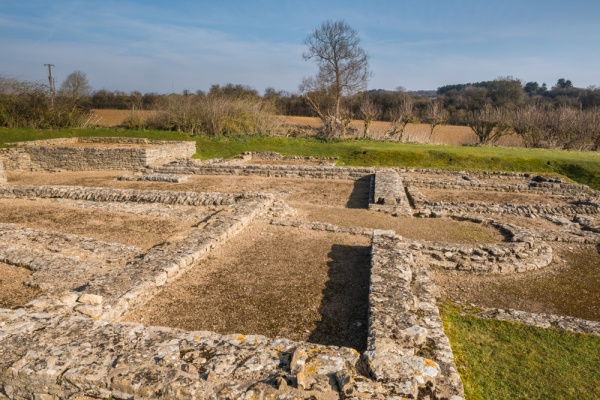 The remains of a large Roman villa stand on a sloping site above the River Evenlode. The most impressive feature at North Leigh is an almost complete section of mosaic flooring, largely composed of geometric patterns.

The villa was constructed sometime in the late 1st century, and was inhabited until the late 4th or early 5th century, as indicated by finds of coins from the reign of Arcadius, who reigned from AD 383 - 408.

The first building was a simple rectangle, but this was later expanded to create a complex of buildings around three sides of a rectangular courtyard. A small gatehouse and porters lodge were set into the south-east side. Only about half of the villa is open to view; the remainder was re-covered to preserve it from decay, but enough remains to get a very clear picture of the site layout.

There were 3 bath complexes; at the north, east, and west corners. Of these, only the north baths are visible above ground. The presence of three bath suites suggests that North Leigh was home to several generations of the same family, each generation maintaining its own baths. 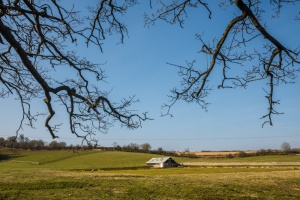 Looking across the villa courtyard
from the south-east

A fascinating discovery was unearthed by archaeologists investigating the north bath complex. Investigators digging in the furnace room (praefurnium) found a stash of counterfeit coins and tools, including bronze bars, pellets, and blanks used to create false coinage. The coins were of low value, probably taking advantage of a shortage of small change in circulation.

The villa was probably inhabited by a local British family who adopted a Roman lifestyle. During its heyday the villa would have supported a community of family, servants, and slaves, many of whom would have worked the surrounding fields.

The villa is not very well signposted from nearby roads. There is an English Heritage sign directly opposite the lane leading down to the villa, and a layby with room for 3-4 vehicles on the west side of the road (heading north), though we discovered that you can just as easily pull onto the verge from the southbound side of the road.

From the entrance to the lane, you head slightly downhill between hedgerows, with glimpses of farmland on either side. The villa will come into view on the right after just a few minutes pleasant walk.

There are several information panels around the site, including a very useful map of the site, showing when the different parts of the villa were built. Near the entrance is a 19th-century cottage, now boarded up, and another 19th-century building has been erected over the mosaic floor.

You can see through the windows on two sides of this building and catch a glimpse of the mosaics, but it is not easy to make out any details. It looks as though the mosaic building was intended to be open to the public from time to time, but it has been shut every time we've visited.

The site slopes slightly from the north-west range, which means that you can stand on that side of the site and get a really good idea of the villa layout. The north-west range also has several extremely good sections of hypocaust, or underfloor heating, with channels running under the floor level.

We've visited North Leigh four times, and every time I visit, I enjoy it more. The location is gorgeous, and there's a real sense of solitude. 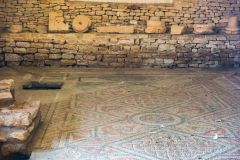 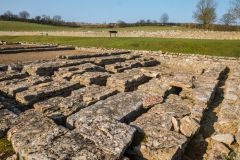 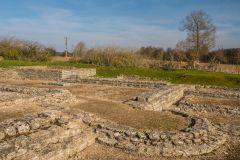 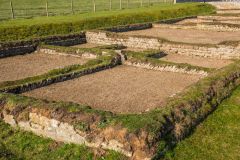 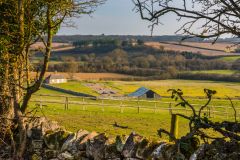