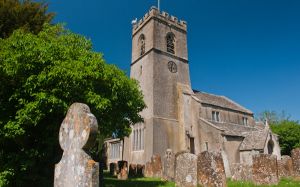 The interior maintains much of its 13th-century heritage, with an original chancel arch and very nicely carved capitals in the nave arcade. The east window is 15th century, and there is a 14th-century piscina in the south wall. Even older is a second piscina in the south aisle. Perhaps even more interesting is the carved wooden screen, a 15th-century survivor.

There is a 14th-century font in octagonal style. There is a Lady Chapel to the north side of the chancel, with a 15th-century roof. Upon the Lady Chapel wall is an interesting triptych; a copy of The Adoration of the Magi by Hubert and Jan van Eyck. The original hangs in the Cathedral of Ghent.

The pulpit dates to 1629 and is carved with a very attractive frieze. There is some original medieval stained glass in the east window. The centrepiece shows a figure of St Peter; the saint's body is 15th century, but the head is a century older.

Other medieval fragments have been assembled in the upper part of the window. On the right is the ducal coronet of George Spencer, 4th Duke of Marlborough (1739-1817). The Spencers held the living of Stonesfield in the early 19th century. 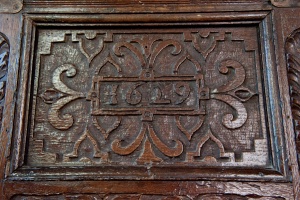 Even more intriguing are the windows in the west window, south-west chancel window, and west clerestory window. Here you will find 15th and 16th-century symbols of the Fettiplace family (see Swinbrook and East Shefford). These pieces of glass were originally at Swinbrook Church, but were given by the antiquarian William Fletcher to Rev'd Francis Robinson, who served Stonesfield from 1834-1882.

The English Heritage record for Stonesfield church rather unkindly says that the aesthetics of the church was 'destroyed' when the north aisle was added in 1876.

Slate has been quarried in Stonesfield since Roman times, but it was only in the 16th century that the slate industry really flourished. For three centuries Stonesfield slate was highly prized, and it was not until the late 19th century that the industry declined. The slate quarry closed in 1911, though numerous old mine shafts can still be seen in and around the village.

Stonesfield slate is Jurassic limestone, formed over 100 million years ago. The slate stone is called 'pendle'. It was mined in the Autumn, brought to the surface, then covered in turf and soil. This covering retained moisture in the stone.

When the winter frosts came, the stones were uncovered, and the freezing temperature split the pendle stone. The split pieces were then cut into different sizes of slate for roofing. Under the tower is a piece of slate hung on the wall. The slate was originally used to roof the old rectory (Stonesfield Manor) in 1650. 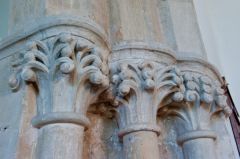 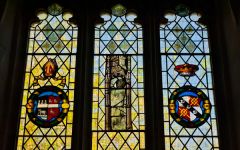 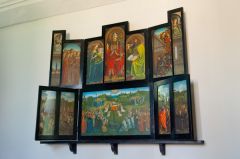 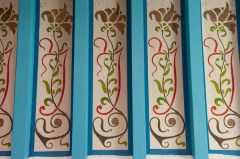 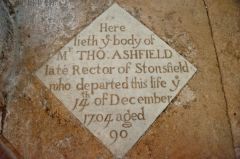 More self catering near Stonesfield, St James the Great Church >> 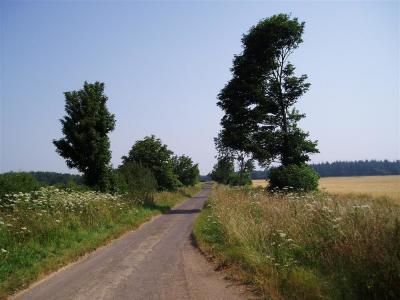 This ground floor cottage is located in Stonesfield, Oxfordshire and can sleep four people in two bedrooms.
Sleeps 4