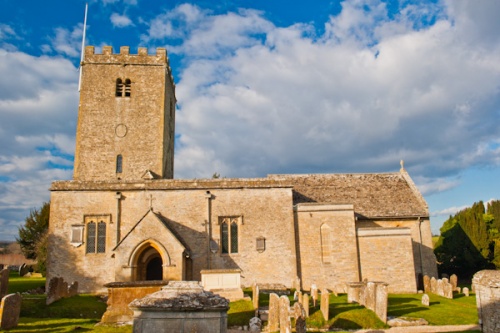 St Mary's at North Leigh is a delight; a gem of a church, with a marvellous Perpendicular chantry, two intriguing wall monuments, a fabulous wall painting, and enough architectural interest to keep a history-buff fascinated for a long, long time.

The tower is the oldest part of the church, dating to the Saxon period. That age is fairly obvious when you look at the top of the tower, with its round-headed windows, and at the stonework of the angles, where you can make out traditional 'long-and-short' Saxon stonework.

As you examine the exterior of the tower you can't help but notice four odd little gabled projections, rather resembling large bird-houses, that stick out from the tower walls. These were added to protect the ends of two large tie-beams from the effects of the weather. Presumably, the tie-beams were added to counter bulging of the tower walls, a suggestion that is given more weight when you see that the pillars of the interior tower arch are out of alignment.

The south doorway is Norman, probably 12th century, as are the rounded nave piers. The pointed arches are slightly later, towards the end of the 12th century. The chancel was added a century later and is a good example of the transition from Early English style to the Decorated Gothic fashion. The east window dates to about 1300. 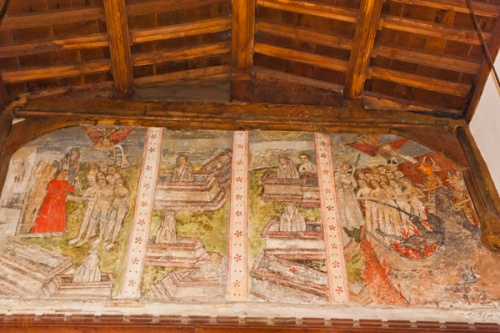 On the south sanctuary wall, near the piscina, is a lovely 17th century memorial to Robert Perrot (d. 1605), showing Perrot kneeling, facing his wife, with their four daughters and four sons arranged beneath them in a neat row.

On the nave side of the chancel arch is one of the great treasures of St Mary's; a marvellous Tudor wall painting depicting a 'Doom' scene, and a Resurrection. This painting is divided into four sections; the two middle sections show the dead rising from their coffins - nicely dressed in Tudor costumes.

On their right is the Devil rising from a pit of fire and pointing his finger at a mitred bishop. A statement of Tudor attitudes towards established church authorities? To the left is a figure in red, probably representing St Peter. Compare this painting with a very similarly themed wall painting at South Leigh.

As wonderful as the painting is - and it truly is! - the real joy of North Leigh church is the 15th-century chantry chapel, or the Wilcote Chapel, as it is sometimes known. This small chapel off the north aisle is an absolute gem; a marvel of later medieval architecture.

The chapel is beautifully decorated with ornate fan vaulting and illuminated by three large Perpendicular windows. The windows contain some very nice original stained glass, but they are just a side-show to the real focus of the chapel, a large altar tomb set beneath a moulded ogee arch. Upon the tomb are two alabaster effigies, a man and woman lying side by side.

The woman is Elizabeth Blackett, whose first husband was Sir William Wylcot, Sheriff of Berkshire and Oxfordshire in 1392. Sir William died in 1411 and Lady Blacket was granted a license to build a chantry. Lady Blackett died in 1442.

Look closely at the effigies and you will see that both wear a collar inscribed with repeating double S's. The S.S. was the badge of Henry IV and was used as the insignia of the Lancastrian party in their conflict with the Yorkists that resulted in the Wars of the Roses. While it is not uncommon to see male effigies wearing the S.S. badge, it is very unusual to find the insignia on a female effigy.

The details of both effigies are wonderfully carved, despite the inevitable graffiti of centuries, and they show in wonderful detail the type of costume nobility of the period wore. Look down to the feet of Lady Blackett's effigy and you will see a small alabaster dog playing with her gown - an amusing touch in an otherwise rather stiff and formal sculpture. 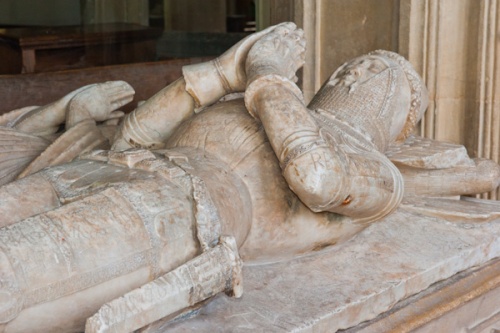 Near the Wylcot tomb, just to the left, is a wall monument to William Lenthall (d. 1628) and his wife. As usual, the couple is portrayed kneeling, facing each other, while their 8 children are portrayed beneath them. One odd touch is immediately obvious; the four boys have been so disfigured as to be almost gone, while the four girls are headless.

The most plausible explanation for this disfigurement is that they were vandalised during Cromwell's Commonwealth, perhaps because they were thought to represent religious idolatry.

Another interesting feature of North Leigh church is the north aisle, sometimes called a chapel, though to be particular it cannot be, for there is no altar. This was added by James Perrot in 1690 (though the church information board says 1742) and is so different in character to the rest of the church as to be almost startling.

The entire aisle is in lovely Italianate style, with a circular Georgian window at the west end. Under the aisle, out of sight, is a large burial vault where members of the Perrot and Musgrave families lie buried. The wall of the aisle is filled with brass coffin plates, taken from rotting coffins.

A final feature is the font, at the west end of the church. At first glance, this looks like a modern sculpture that has been left unfinished, like the stonemason quit work for the day, intending to come back and complete his work, but never returned. In fact, it is a medieval original that was recut, but the design was never finished, so it remains like a blank slate.

North Leigh Church is immensely satisfying to visit, a real pleasure, and well worth taking the time to explore thoroughly.

Note: Although there is a small parking area directly in front of the church, when we visited there was a sign saying 'no parking', for no obvious reason, so we parked along the lane. This was not difficult, just a trifle odd! We discovered later that the car park is almost opposite, in the grounds of the Church Hall - (the Turner Hall). Unfortunately, this isn't immediately obvious, so keep your eyes peeled! 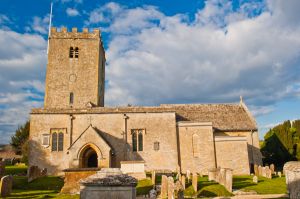 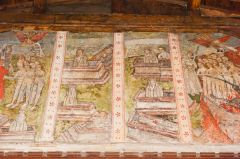 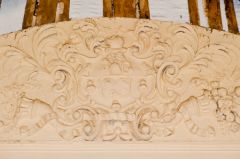 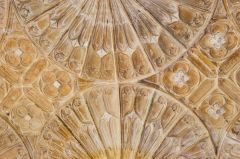 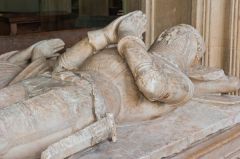 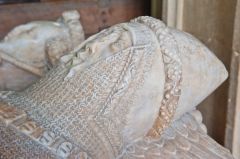