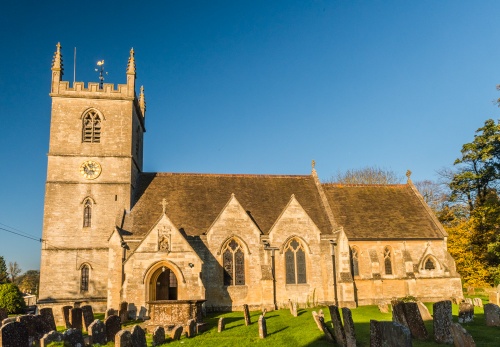 St Martin's church stands on a low rise above the main road running through the village of Bladon, on the southwestern edge of the Blenheim Palace estate. The church is almost entirely Victorian, though there has been a church on this site for over 800 years.

The earliest written record of a church in Bladon comes from 1241, but there was certainly a church here as early as the late 11th century. That early medieval church was substantially rebuilt in the 15th century. By 1802 the church was in dire condition, and rather than rebuild it the 4th Duke of Marlborough had it pulled down and a substantially new church built in 1804. 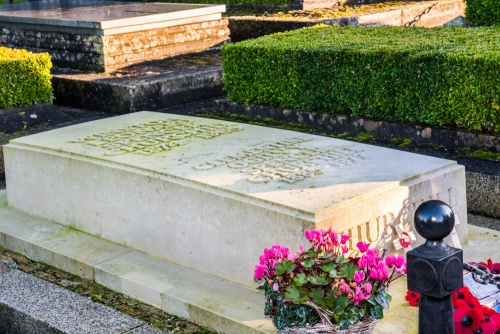 Only one stone was salvaged from the medieval church. It is a small coffin lid, probably used for a child's coffin. It is now set behind the font, near the south door.

The early 19th-century church was rebuilt once more in 1891 by the famous Victorian architect Sir Arthur Blomfield. Unusually, it was not the Duke of Marlborough who paid for the rebuilding, but the rector, Arthur Majendie.

The result was a nave and chancel in 14th-century style, with exceptional woodwork, and very finely crafted vaulting. Three windows in the chancel are dedicated to Majendie, and another to his wife. By far the most interesting window in the chancel is a foliated window in the south wall, near the altar. The window is a copy of Sir Joshua Reynolds' painting 'Choir of the Two Cherubs'. 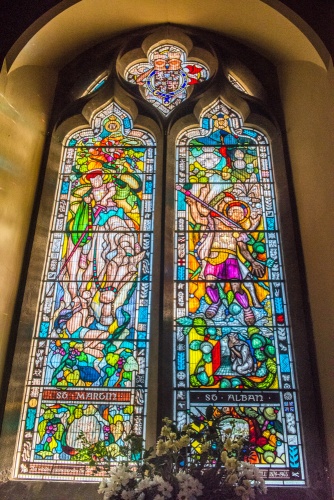 One of the most recent additions to the church is the Winston Churchill memorial window set into the south wall of the nave. The window was installed in 2015 to mark the 50th anniversary of Churchill's death. The window was created by renowned artist Emma Blount of London, and unveiled by the Duchess of Cornwall.

The memorial window is divided into 2 sections, or 'lights'. One light depicts St Martin, to whom the church is dedicated, and the second depicts St Alban, the first British-born saint.

These are fairly typical subjects for stained glass windows, but what makes the Churchill window so special is the detail; around the border and interspersed throughout the panes are symbols from Winston Churchill's life. If you look closely you can see a tank, a polka-dot bow tie, a Union Jack, and Churchill's famous V-for-Victory sign.

Some symbols mark episodes in Churchill's life, like the barbed wire that recalls his escape from the Boers, brick-laying tools that Churchill used in his home at Chartwell, writing tools, paintbrushes to remind us of his passion for art, even a WWI gas mask.

It is fascinating to examine the window up close and see how many symbols you can spot. Also scattered around the window are very finely inscribed quotes, and of course, Churchill's own coat of arms.

Also in the south wall, just east of the Churchill Memorial Window, is a window installed by Consuelo Churchill, nee Vanderbilt, wife of the 9th Duke, in honour of her son, Ivor Spencer-Churchill. Ivor was a cousin of Sir Winston Churchill, who died in 1956.

Much older is a dedication board just west of the door, near the font. The board lists a bequest by John Nixon in 1800, who gave 20 shillings per year to keep the organ in god repair, and 15 shillings to the church's choir singers. Look for the fascinating bequest by William Hopkins, dated 1681, who provided money to be given to a man or maidservant in Bladon who has served 3 or more years with the same master. 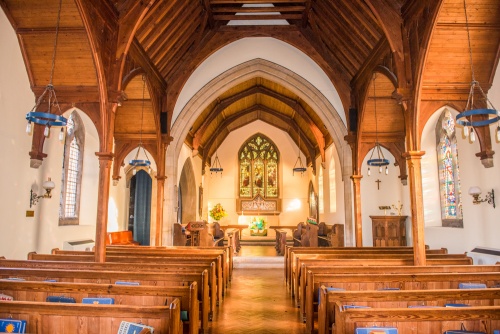 Though the interior of St Martin's is very much worth a visit, it is really the Churchill connection that brings most visitors to Bladon.

The parish of Bladon contains Blenheim Palace, and generations of Spencer-Churchills are buried in St Martin's churchyard. The most famous, of course, is Sir Winston Churchill, who has been voted the Greatest Briton of all time in a public poll. Churchill could have been buried in Westminster Abbey, but he preferred the simplicity of St Martin's, near his birthplace of Blenheim Palace.

When Sir Winston died in 1965 a public service was held at St Pauls's Cathedral in London, then his body was brought by train to Hanborough, and then by car to Bladon for burial. Here he was buried in a private ceremony, attended only by his close family and personal friends.

Churchill's grave almost immediately became a popular place for tourists The grave suffered damage from the large number of visitors, and in 1998 his tombstone was replaced.

The new memorial was not universally admired; the Churchill Society were scathing in their attitude towards the new grave. They noted that the style of incised lettering would be almost guaranteed to collect dirt and mould. They were apparently correct, for just 8 years after it was installed the new memorial had to be cleaned and restored.

The Churchill family graves are located in the lower section of the churchyard, just north of the west tower. The graves are ringed by a low iron fence, so you can't walk among them, but rather, you have to walk around the outside of the enclosure and examine the graves from a slight distance. Sir Winston Churchill's grave is at the westernmost end of the enclosure, and is quite noticeable, as it is very different in style to the other family graves. 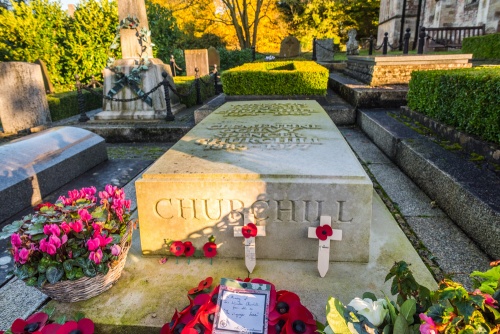 The church is on Church Road, off the main road through Bladon. There is very limited parking along the roads near the church. If you are visiting Blenheim Palace there is a signposted walk from the Blenheim estate to the church. The church is open daylight hours, but Churchill's grave being in the open, is accessible at any time.

I found it surprisingly moving to visit Churchill's grave. We came to Bladon shortly before Remembrance Day, and the grave was adorned with several bouquets of red poppies, including one from the RAF base at Brize Norton, a few miles to the west. It is a mark of just how much people respected Churchill and how much he meant to so many, to see the tributes laid at the side of the very simple memorial.