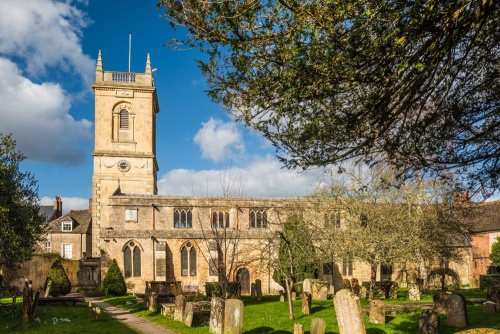 The historic 12th-century church of St Mary Magdalene in the Oxfordshire town of Woodstock owes its existence to the presence of the royal hunting lodge of Woodstock manor. The church was built during the reign of Henry II (1154-1189) as a chapel of ease so that local people, including members of the royal court, did not have to travel to the parish church at nearby Bladon to worship.

Over the next 800 years there were frequent disputes between clergy, townsfolk, and church patrons over exactly who had responsibility for church upkeep and whether the rectors of Bladon should be required to provide services to Woodstock as well. 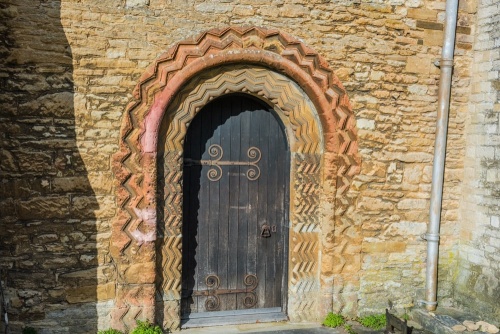 The only parts of that original chapel of ease to survive are a section on the south nave wall and a beautifully carved round-headed 12th-century doorway set into the south wall. The doorway is carved with two orders of traditional Norman zig-zag pattern separated by moulding. Unusually, the zig-zag carving extends all the way to the ground.

To see the doorway, walk past the church entrance into the churchyard.

In 1210 King John endowed a chantry chapel with money for a priest to say prayers for his soul. Later in the 13th century the church was enlarged and a bell tower and burial ground were added. 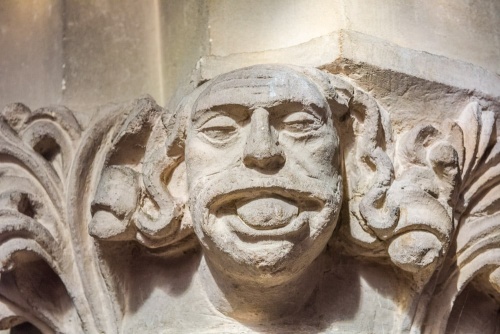 From this expansion come the superb column capitals on the south nave arcade that are one of the church's best features. There are 23 carved heads incorporated into the design of the capitals, interspersed with foliage.

Each capital is different and the heads are all unique. There are sixteen male figures portrayed and seven females. One figure wears a coronet and may depict King Henry III (1216-1272). Two men are tonsured, so must represent monks or priests, while two are making distorted faces and may be meant to portray mentally ill people. 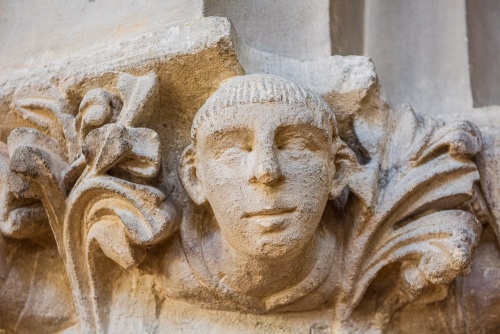 Carving of a tonsured man

We have to assume that these unique carved figures are depictions of local people, including merchants who may have donated money to the church.

The seven female figures are worth studying, for they wear elaborate headdresses so typical of 13th-century fashion. Two are elderly, and one of these wears a veil. 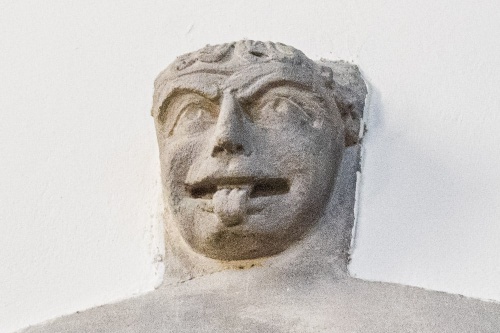 Aside from the carved heads in the south nave arcade, there are five further carved figures, two inside the church and three more outside, though it seems probable that these have been moved from their original positions. 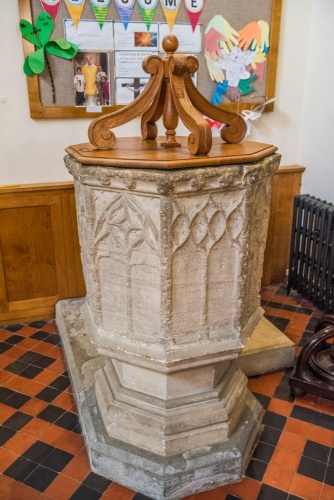 Another historical highlight is the font bowl, which dates to the 14th century. The font has had an interesting history; in the early 1700s it was removed from the church and for over a century it served as a garden ornament at No. 9 Park Street before it was returned to the church and placed on a new pedestal.

You enter the church through a west porch, added in the 15th century. Over the outer arched entrance is a statue niche with a carving of St Mary Magdalene. The carving is modern and replaces the original medieval statue, which has been lost. 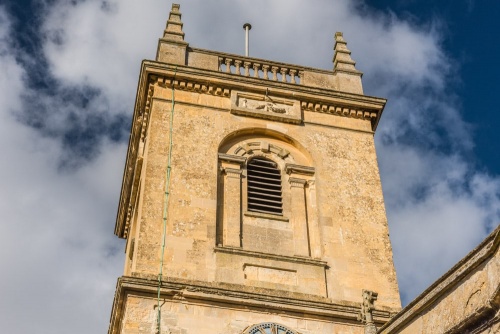 The west tower is unusual in that it was added in 1784, during a period when there was very little church building in England. The tower is in Georgian Renaissance style, decorated with carvings of floral garlands. 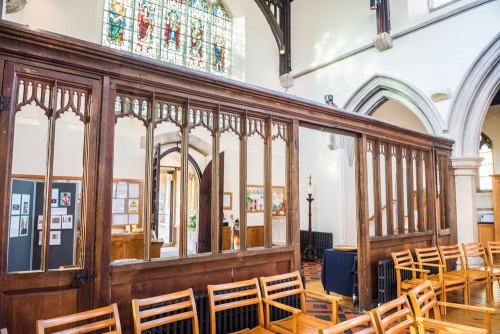 Separating the church porch from the nave is a wooden screen, carved in the early 16th century. The screen was originally installed in the traditional place between the nave and chancel, but was moved to the west end of the nave in 1999 to make the high altar more easily visible. 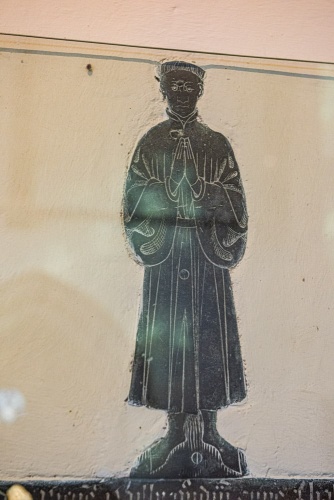 The oldest monument inside the church is a small brass to a wealthy Woodstock merchant named Richard Bailly, dated 1461. The brass is protected by a plexiglass cover and hangs on the south wall. In the south aisle is a mural tablet to James King, who sailed with Captain James Cook. Also in the south aisle are two memorials to Jerome Keyt, who died in 1631. He lived at Chaucer's House further along Park Street, near the town entrance to Blenheim Park.

All of the stained glass is Victorian. The west window was installed in memory of Rev Arthur Majendie, who sponsored the 19th-century restoration. The east window, behind the high altar, is in memory of the 7th Duke of Marlborough. In the Lady Chapel is a window commemorating a student of Magdalen College, Oxford, who tragically died by drowning while skating on Blenheim Lake.

St Mary Magdalene Church is a gem, a beautiful historic building in the heart of Woodstock, and well worth a visit. As far as we can determine, the church is regularly open to visitors and was open when we visited. 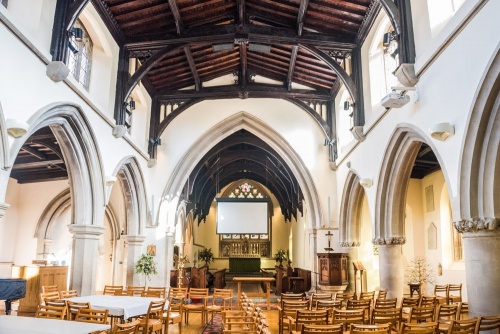 The church stands on Park Street, immediately west of the town hall and the Bear Hotel, and opposite the Oxfordshire Museum. There is no dedicated parking, but there is parking around the market place and along nearby streets.

Self Catering near Woodstock