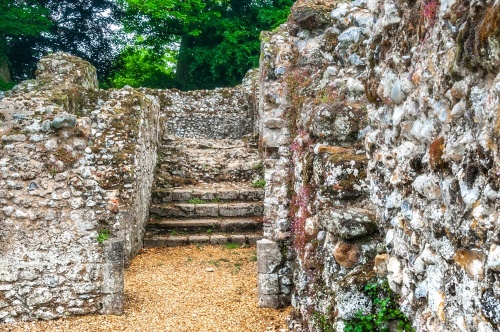 A small site with a big history - English Heritage calls this important complex of historic buildings 'North Elmham Chapel', but that simple name does not do justice to what is really a fascinating group of buildings dating back to the 7th century. You could just as easily call the site a settlement, with the ruins of a Saxon minster and cathedral, and a bishop's palace, or castle. 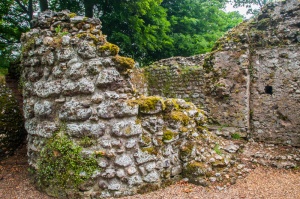 Remains of the chapel apse

The small Norman chapel on this site stands on the site of a Saxon cathedral, the most important in East Anglia. In the 14th century, the building was incorporated into a fortified manor house built by Henry le DeSpenser, the unpopular Bishop of Norwich.

The site was first occupied between AD 650 - 750 when a cathedral community was established here, surrounded by ditches. Between AD 850 - 1000 the ditches were filled in and several large halls were built around a courtyard.

This complex of buildings has been interpreted as a Bishop's Palace, though the first bishop known to be associated with North Elmham is Athulf, in about AD 950. North Elmham was abandoned when the bishop's see was transferred to Thetford in 1071. It was later moved again, to Norwich.

From 1091 Bishop Herbert de Losinga erected a new parish church for the villagers and rebuilt the old timber church as his private chapel.

Bishop Henry le DeSpenser began a manor house here in the mid-14th century. The unpopular DeSpenser rebuilt the 11th-century chapel as a private dwelling, and in 1388 he was granted a license to crenellate his house. The Bishop must have felt the need to protect himself from his own tenants. His harsh treatment of those involved in the 1381 Peasant's Revolt made him one of the most hated men in the country amongst the lower classes.

Bishop Henry died in 1406, and there is no record of the bishops house being occupied after this date, though we do know that manorial courts continued to be held at North Elmham. At the Dissolution of the Monasteries, North Elmham was granted to Thomas Cromwell.

Cromwell assigned the medieval 'castle' to the vicarage. It gradually fell out of use and became the picturesque ruin we see today; a jumble of stone walls and foundations representing over 800 years of continuous use.

The mix of chapel and fortified house remains makes the North Elmham site a challenge to understand. We do know that the chapel tower was, unusually, the same width as the nave, and was reached by an external stair. A pair of shorter towers flanked the transept, and the east end terminated in a rounded apse. The entire structure has more in common with European architecture than traditional English style.

The chapel remains are of local stone with large pieces of flint, and limestone dressing at doors, windows, and corners. By contrast, Bishop DeSpenser's fortified house was made with small pieces of flint with brick and ashlar dressings.

Perhaps the most obvious remnants of the bishop's 'castle' is a broad set of stairs that led to the great hall and living quarters. You can see the remains of the moat and earthwork defences that DeSpenser installed to protect his house from the angry peasants. 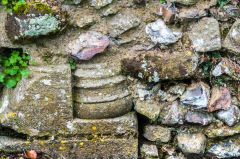 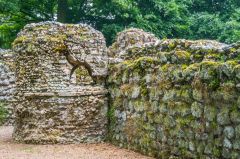 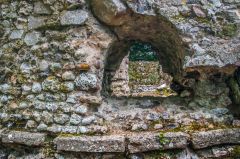 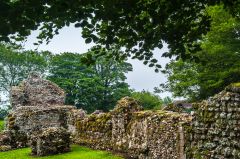 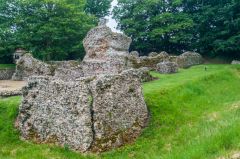