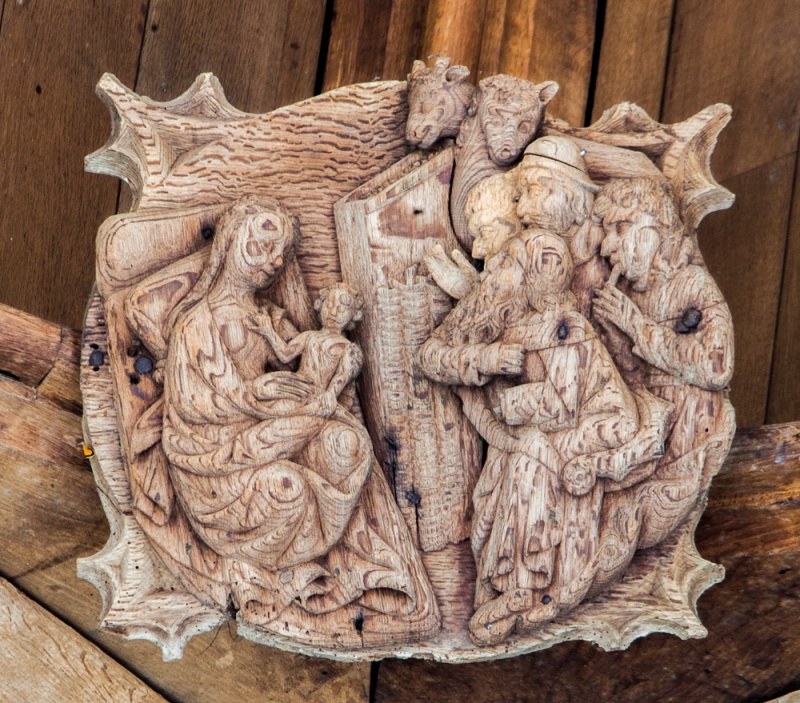 The 15th-century church of St Peter & St Paul in Salle has been called the finest historic church in Norfolk, and one of the best in Britain. The church was built in one go, between 1400 and 1450, financed by wealthy wool merchants like the Mauteby and Ufford families. These prosperous families paid for expensive Barnack stone to be transported from Peterborough, rather than using cheap local flint.

The result is a superb example of Perpendicular architecture. The striking tower reaches 126 feet and can be seen for miles above the flat farm fields that surround it.

Like many Norfolk churches, it was neglected when the medieval wool trade diminished, and it was in dire condition as early as the 18th century. The church was restored in the early 20th century, but thankfully the restoration left many of its medieval features intact.

Among the historic treasures of Salle's church is a memorial brass to John Brigge, one of the wealthy merchants who helped build the church. The south transept was built by Thomas Brigge, who died in 1444.

He specified in his will that 25 years after his death (i.e. 1469) two of his manors should be sold and the proceeds used to pay for masses, pilgrimages, and alms on behalf of himself and his two wives. It seems that at least some of the money was used to build the transept.

The beautifully large windows that now illuminate the interior were once filled with richly coloured stained glass. Several fragments remain in the east window, including one depicting an angel holding a diagram of the Holy Trinity doctrine.

There are more 15th-century panels in the tracery lights of the chancel windows, including St Catherine carrying her wheel and St Margaret of Antioch shown slaying a dragon with a cross. The south aisle window contains the oldest glass, made around 1411. These panels show God the Father, part of a scene depicting the Creation of the World.

One of the glories of Salle is the stunning timber roof of the chancel, where the beams are decorated with carved figures of angels. The roof originally had 276 angels, of which 159 survived the excesses of the Reformation iconoclasts.

The ridge of the chancel is decorated with 9 carved bosses. The carving detail is simply exquisite. The bosses are bare wood, though they would surely have been brightly painted when new.

The octagonal font features symbols of the Seven Sacraments, and figures of angels. The Perpendicular font is a work of art, but so is the magnificent wooden cover, or canopy. Above the cover, projecting from the tower balcony, is a wooden crane used to raise and lower the cover for baptism services. On the font base is a worn inscription inviting prayers for the souls of Thomas Luce, his wife, and their son Robert Luce. 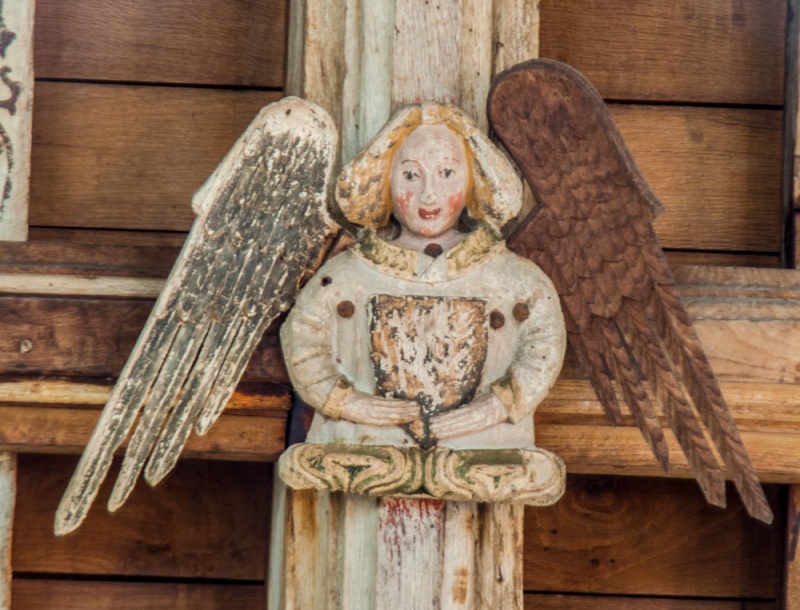 Robert was a chaplain in the Guild of the Assumption, who worshipped in a chapel in the north transept. He died in 1456 and is buried in the chapel. Robert was one of a half dozen chaplains active in the church at the same time. Several of the chaplains bequeathed money to the poor of the parish, and gave gifts of books. The chaplains were not always concerned with the spiritual welfare of the parishioners, for history records that one was also charged with rabbit poaching.

Other interior highlights include a 15th-century wineglass pulpit, and an array of medieval choir stalls with carved misericords. There are 26 misericords, with foliage patterns prevailing, but there are also small human heads and grotesque beasts. There are more beautiful carvings on the bench ends, including several human heads. 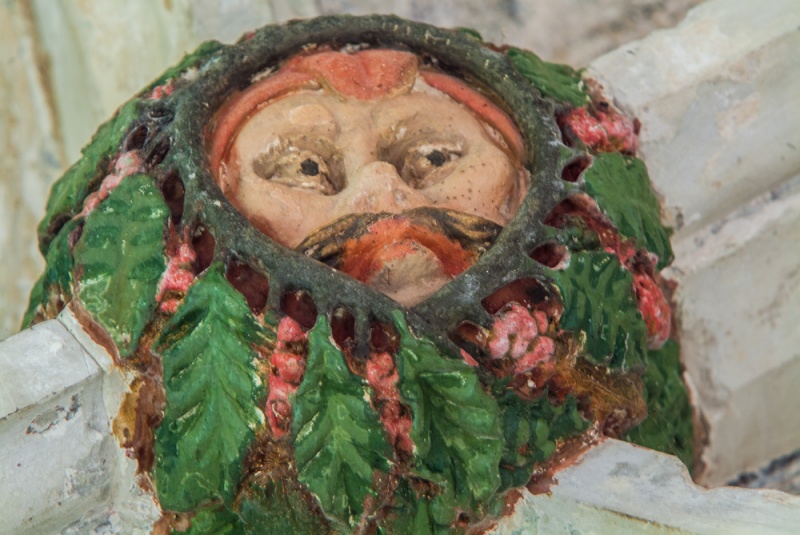 One of the patrons whose wealth built Salle's wonderful church was Geoffrey Boleyn, or Bullen, who died around 1440. The Boleyn family lived in Salle as early as 1318. They later rose to prominence and purchased Blickling Hall. The Hall we see today is a beautiful 17th-century mansion, but it is merely the most recent incarnation of the house. It is thought that Anne Boleyn, second of Henry VIII's six wives, was born at Blickling Hall.

The story of Anne's rise and fall has been told countless times. When Henry despaired of having a male heir with Catherine of Aragon, his first wife, he tried to divorce her, and his struggle to cast off Catherine helped launch the Protestant Reformation and a split with the Catholic church in Rome. Henry married Anne, and together they had a daughter, later to become Elizabeth I.

When Henry tired of Anne he had her executed, ostensibly for a string of affairs, including a reputed union with her brother George. Anne Boleyn was executed at the Tower of London, but what became of her body? The official version is that she was buried beneath the floor of St Peter ad Vincula chapel, beside the green where she was beheaded.

However, unsubstantiated legend says that after her death her body was exhumed by her friends, and brought in secret to Salle, and buried in the church built in part by her paternal great-grandfather Geoffrey Boleyn. She was buried at midnight, and a plain black stone erected over her final resting place. The earliest mention of this story was provided by an eye-witness to events, two weeks after Anne's death.

Another version of the events was related by the novelist Charles Dickens in an article in Bentley's Miscellany, published in 1848.

The truth of whether Anne Boleyn is buried at Salle will probably never be resolved, for neither the church nor St Peter ad Vincula chapel is likely to dig up their floor to answer the question.

Rumours say that Anne Boleyn's restless ghost has been seen at Salle church, where she is said to walk on the anniversary of her death.

Salle's beautiful church stands almost alone on a country lane north of Reepham. There is no sign now of the wealth that built this extraordinary historic building. The village seems non-existent, with just a few scattered houses and farms nearby. You'd think that the church would be redundant, but thankfully it is still being used.

When I visited it was to find a string quartet practising for an upcoming concert, their beautiful harmonies filling the church and reverberating around the spacious interior. It is a scene I will always remember, and so is the wonderful church itself. I recommend bringing a good pair of binoculars so you can really get a good look at the exceptional angel roof in the chancel. 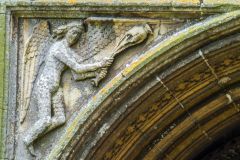 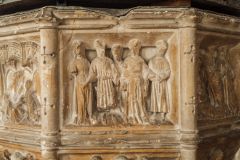 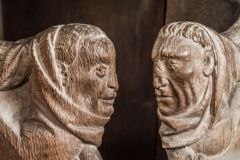 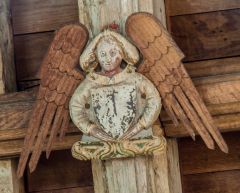 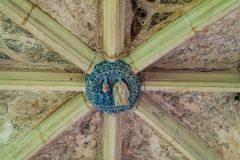 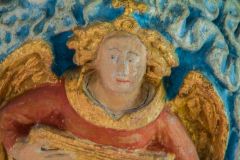