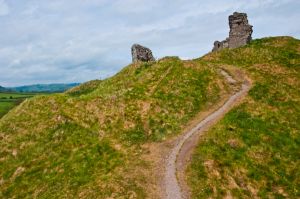 Clun Castle is a Welsh Border fortress in a dramatic location overlooking the River Clun. The impressive castle enclosure consists of a motte (castle mound) and no less than three baileys, or earthwork enclosures, with a narrow causeway leading from one bailey to the next.

The most unusual feature of Clun Castle is that the 13th-century keep is set on the sloping side of the castle mound, rather than on top of the mound. This means the keep could serve a dual purpose as a flanking tower for defence, but also as a place for storage and habitation.

Three sides of the keep walls still rise almost to full height, but the side facing the centre of the castle enclosure has almost vanished. The lower two storeys extend down the slope of the motte so that the keep is much higher from below than from the summit of the motte.

The first castle at Clun was constructed of wood between 1090 and 1110, probably by Robert de Say. The castle was part of a larger Marcher lordship called the Honour of Clun.

Say's simple fortress was burned by the Welsh in 1195-6. Sometime in the early years of the 13th century, the Honour passed to the Fitzalan lords of Oswestry. King John battered Clun during the Baron's War that led to the Magna Carta signing, and it was rebuilt sometime before 1233. The Fitzalans later became Earls of Arundel and left their Marcher estates to decay.

Clun Castle was recorded as being in poor condition as early as 1272, and by the time it was attacked by Owain Glyndwr in the early 15th century it must have been little more than a ruin. After Glyndwr's rebellion, the castle became a hunting lodge, prison, and centre for political administration of the area.

In the 16th century, a courthouse building was added, but shortly thereafter the castle fell out of use entirely and was described in 1540 as being in a ruinous state. It was left to moulder away and become little more than a picturesque ruin.

The castle remains include the imposing four-story stone keep and small sections of a curtain wall. As mentioned, the Great Tower is built into the side of the motte, and the motte and baileys are surrounded by a deep moat.

You approach the castle over a footbridge across the River Clun, and the sight of the castle mound from the bridge is striking; it seems to glower down at you. The slope of the mound is quite steep, though there is a path that winds back and forth across the hillside to ease the effort of reaching the top. But once you do reach the summit of the motte the views are exhilarating, out across the surrounding fields and hills.

The really striking thing is the keep, with its lower sections extending down the slope of the castle mound. I can't recall a similar design at any other castle, and it really is quite striking. Beyond that, there is not a whole lot to see, but the location is fabulous, and there are information panels that help bring the history of the site alive. 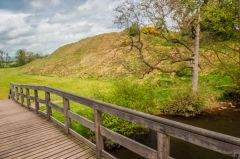 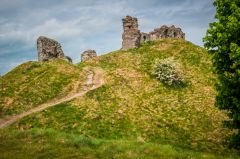 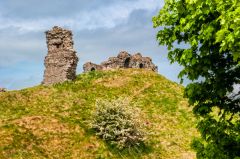 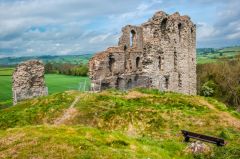 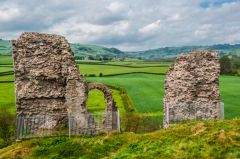 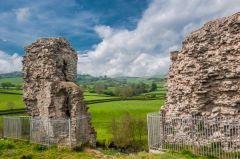 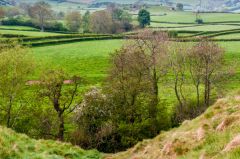 More self catering near Clun Castle >> 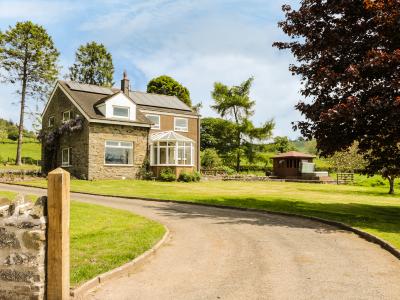 This beautiful stone house is near the town of Clun in Shropshire can sleep ten people in five bedrooms.
Sleeps 10 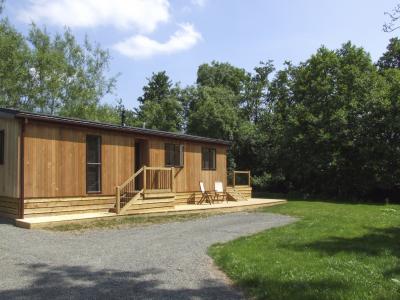 This wonderful detached lodge sits in a rural position, beside the River Clun, 2.5 miles from Clun in Shropshire, sleeping four people in two bedrooms.
Sleeps 4