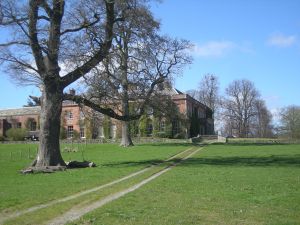 Walcot Hall
An elegant Georgian country house owned by Clive of India, Walcot Hall dates to the Elizabethan period, but the original house was remodelled after Clive purchased the estate on the advice of his uncle, Sir Francis Dashwood of Hellfire Club fame.

Clive hired Sir William Chambers to create a stately Georgian mansion, which he did over the years 1763 to 1767. Further additions were carried out by Clive's son, Edward, who added the Ballroom.

He also created the 20-acre arboretum on the slope behind the house, where you will find winding walks among superb specimen trees. Below the house is a lake, enlarged by French prisoners during the Napoleonic Wars. The gardens feature lush displays of azalea and rhododendrons, which are at their best in the Spring months.

The house was rescued from demolition in 1929, and the estate subsequently became home to a large bird sanctuary, aided by the construction of a fenced area seven miles long, with fences six feet high to keep out foxes. When the house was occupied by the Army during WWII many of the birds found a new home at Slimbridge, Gloucestershire, which has since become one of the most important bird sanctuaries in the country.

The house is constructed of red brick beneath a slate roof and stands two storeys high, laid out on an irregular U-shaped plan. The arboretum is open from spring through autumn, but the house is generally only available to view by pre-booked arrangement for groups. See the Walcot Hall website for current details.

More self catering near Walcot Hall >>