HERITAGE HIGHLIGHTS:   Remains of the 12th-century castle and motte 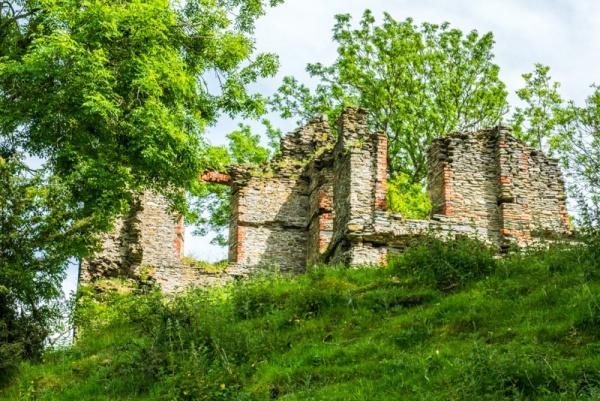 Stapleton Castle is a fascinating ruin atop a low hill just north of Presteigne, a combination early medieval castle and Elizabethan manor house on a commanding location above the River Lugg.

The castle was probably built during the Anarchy, that turbulent era in the middle of the 12th-century when King Stephen and Empress Maud battled for the throne of England. The castle builder was probably Hugh Fitz Osbern or his son Osbern Fitz Hugh, lords of Richard's Castle.

But why was it built?

The answer lies with Roger Port, Lord of Kington Castle. In 1143 Port extended his territory by seizing Warden Castle in Presteigne. In response, Hugh (or Osbern) built Stapleton Castle just a few miles away, possibly on the site of a Saxon manor house. So Stapleton Castle was, in effect, a siege castle built to help retake Presteigne. However, the attempt came to nothing and the lords of Richard's Castle used it as an administrative headquarters for the western part of their estates.

A small settlement grew up around the castle walls, and in 1223 Margaret Say (or de Saye), Osbern Fitz Hugh's heir, was granted the right to hold a market in the village. Margaret married three times, the third time to Robert Mortimer, the scion of the Mortimers of Richard's Castle, one of the most powerful families in the Welsh Marches. 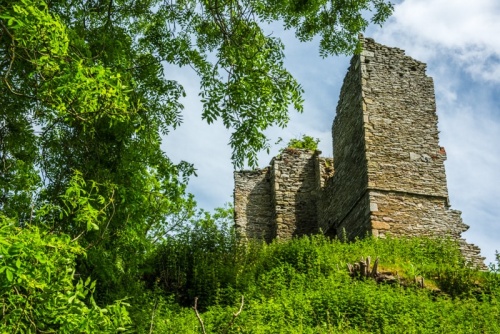 Remains of the Elizabethan house

Robert and Margaret's great-grandson was Hugh Mortimer, a knight with a fearsome reputation in battle. His battle skills did not protect him from his wife Matilda, for in 1304 Matilda poisoned her husband. She also, apparently, murdered large numbers of the knights of Richard's Castle and Stapleton. The few barons left in the district had her charged with murder.

Ah, but Matilda was a relative of Queen Margaret, second wife of Edward I, and her royal influence protected her in the courts. When Edward I died in 1307 Matilda's enemies moved in. Matilda died in the interregnum between Edward's death and the succession of Edward II, probably murdered by her enemies.

Was she really the villainous poisoner of legend? Perhaps, or perhaps her enemies simply wanted to get rid of a powerful woman.

After Matilda's death, Stapleton Castle passed to her daughter Margaret and by marriage to the Cornwall family. In 1403 Henry IV ordered Sir John Cornwall to strengthen the castle and supply it to withstand the threat posed by Owain Glyndwr and his followers. That suggests that the castle was still well-maintained at the time.

Sir John Cornwall later fought at the Battle of Agincourt in 1415. Sir John's loot from the Agincourt campaign included a wealth of French armour taken from fallen knights, which he used to decorate the walls of Stapleton Castle. The armour was removed to Burford Church during the Civil War and eventually sold by the churchwardens to raise money for a gallery. According to legend the last piece of armour to be seen was a helmet used by the local blacksmith to catch ash. 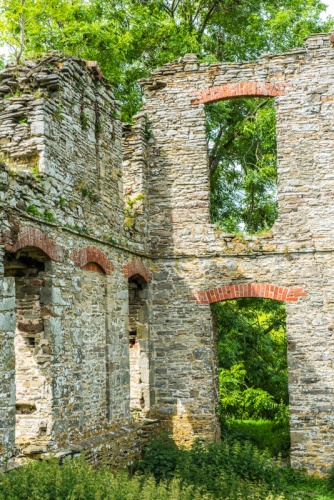 The west wing of the 16th-century house

In 1461 the Lancastrian army fled past Stapleton Castle after defeat at Mortimer's Cross.

During the 16th century, the medieval castle was remodelled by the Cornwalls as an elegant Elizabethan house laid out as a long rectangle with two cross wings, creating a double-cross plan.

The death knell of Stapleton Castle as a fortress came during the Civil War. The owner at the outbreak of the war was Sir Gilbert Cornwall, a nominal Royalist. Sir Gilbert allowed himself to be swayed by Sir Michael Woodhouse, governor of Ludlow Castle.

Woodhouse feared that the castle defences were inadequate, and in particular that the water supply was not sufficient for a siege. He was afraid that the nearby Parliamentary garrisons at Brampton Bryan and Hopton would take the Castle and hold it against the king. So he had the defences pulled down, destroying the ancient castle himself before it could be used by his enemies.

Later in the War, in August 1645, King Charles and his army passed under the walls of the castle while trying to avoid his enemies after his defeat at the Battle of Naseby. He was back a month later, riding north to Chester. 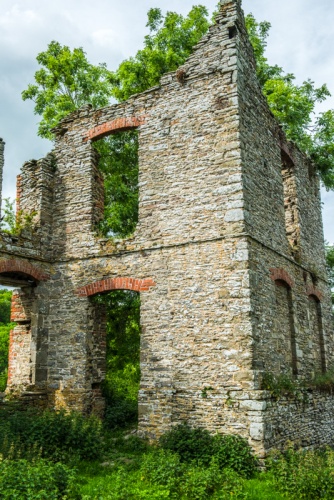 Another look at the west wing

The last Cornwall to live at Stapleton was another Sir John, who left the castle in 1675. After that, it was rented out for 31 years before it was sold in 1706.

The castle remains include a portion of the western gateway, once an impressive entrance to the site. Within the gateway is a stone-built house standing two storeys high, with later brick arches. You can see collapsed sections of the 12th-century walls on the slopes of the motte, below the walls of the Elizabethan house.

The earthwork defences are obvious and show that the castle was cut into the top of the hill rather than raised up on a manmade motte as was often the case. You can see traces of a ditch on both east and west sides of the motte. The bailey enclosure extends to the north of the motte and you can see earthworks with a shallow ditch and a possible entrance.

The site of Stapleton Castle is said to be haunted by a spectral figure known as Lady Bluefoot. According to legend, the lady was the widowed owner of the castle. When she rejected the advances of her steward, a man named Morgan Reece, the steward responded by creeping into her room at knight and slitting her throat with her dead husband's knife. 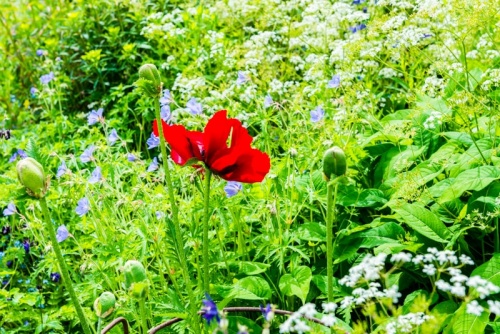 The only public access to the castle is by guided tour, which takes in the lovely modern gardens. The gardens were developed over the course of a decade by Margaret & Trefor Griffiths, owners of the Stapleton estate. The garden is a delicious blend of colour-themed borders and wandering paths.

Though small, there is an excellent variety of colour and variety of plants. We came in May and were amazed at the lush colours. Part of the garden experience is an attractive summerhouse with a display on the history of the castle and its historic mill pond. 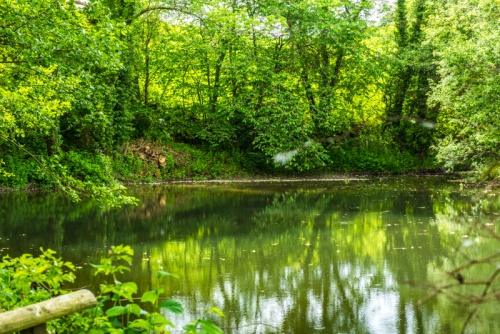 Stapleton Castle is generally closed to the public due to the unsafe condition of the standing walls. We were fortunate enough to take a guided tour of the ruins led by the property owner as part of a National Garden Scheme open day in aid of charity.

So in addition to seeing the castle we got to explore the small modern garden surrounding Stapleton Castle Court. The excellent tour also took in the medieval mill pond. It is well worth keeping an eye on National Garden Scheme listings in case there are future tour events planned.

From Presteigne cross the Lugg Bridge at the bottom of Broad Street and continue straight ahead towards Stapleton. Do not take the right turn to Stapleton village! Instead turn left, following the signs to garden, which will soon come into view on your right. 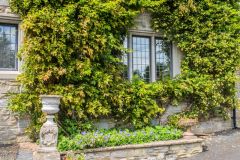 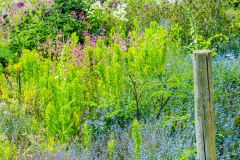 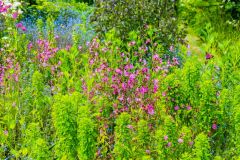 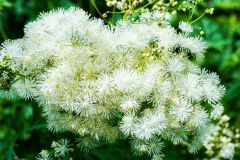 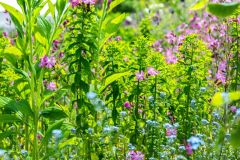 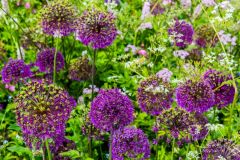 More self catering near Stapleton Castle and Garden

More bed and breakfasts near Stapleton Castle and Garden