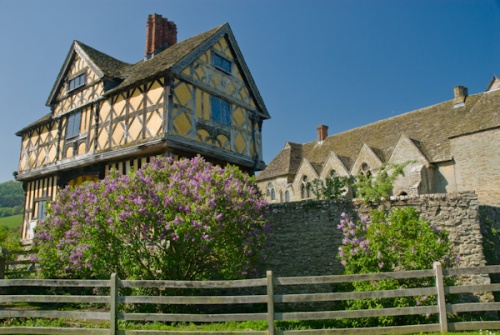 Stokesay Castle is a fortified manor begun in 1281 by Lawrence of Ludlow, a wealthy wool merchant, incorporating parts of older buildings. Stokesay was built at a time when the long border wars between the Welsh and English were, if not ending, at least entering a more peaceful phase.

Thus, though Lawrence built what can be described as one of the first fortified manor houses in England, Stokesay was first and foremost a comfortable country residence, with large, wide windows allowing light into a spacious interior.

The oldest part of Stokesay Castle is the north tower, a late 12th or early 13th-century pele. Inside the north tower are remains of original medieval floor tiles and traces of medieval wall paintings. A wonderful panelled solar, or private chamber, was added in the early 17th century, and this features a quite magnificently carved wooden fireplace overmantel. Beyond the solar is the south tower, a severe castellated tower reached only by a staircase that was designed to be easily defended. 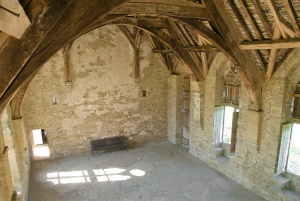 To these towers were added the timber-framed great hall, begun sometime between 1260-1280. The great hall is a magnificent structure, topped by a lovely timber roof. The hall features three large windows in the outer wall, making it clear that even this close to the Welsh border, the owner felt safe enough to make comfort a priority over security.

At one end of the hall a steep stair leads to chambers on the upper floor; this stair is worth examination; its treads were sawn from whole tree trunks. At the top of the stair a landing allows you to get a close-up view of the superb timber roof, supported by huge timbers.

Work on the core buildings of Stokesay was complete by 1291, and, remarkably, the same group of carpenters worked on the entire project from start to finish. Even more remarkable is the fact that the castle has been essentially unchanged since it was built. Thus it provides a wonderful glimpse into the world of the late 13th century in this turbulent area of the Welsh Marches.

The medieval buildings at Stokesay were augmented by a timber-framed gatehouse in 1641. The gatehouse is one of the most photogenic buildings you can imagine, with beautifully carved timbers in typically ebullient Jacobean style. The gatehouse exterior is decorated with carvings of dragons, human figures, and Adam and Eve wearing modestly-large fig leaves.

It's a wonderful building, worth a visit in itself. The gatehouse was threatened shortly after it was finished, for in 1645 a group of Parliamentary soldiers surrounded the house. The owners surrendered without resistance, so Stokesay was spared any damage, leaving it essentially as it has been for over seven centuries.

Beside the castle is the parish church, which is worth visiting. Within you will find a lovely collection of memorials and wall paintings dating from the 17th century and earlier.

Stokesay Castle is a delightful place to visit and one of the premier medieval houses in England.

More self catering near Stokesay Castle >> 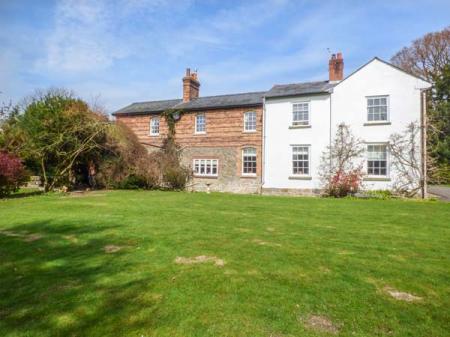 This first floor annexe is a wing of the owner's Grade II listed former vicarage in the hamlet of Stokesay near Craven Arms and sleeps two people in one bedroom.
Sleeps 2