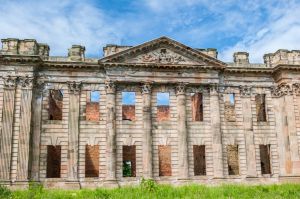 Sutton Scarsdale Hall is the roofless shell of a grand Georgian mansion set in lovely gardens. The house was built in neoclassical Palladian style between 1724-1729 by architect Francis Smith of Warwick for the Earl of Scarsdale. Smith was also responsible for Stoneleigh Abbey in Warwickshire.

Smith used an earlier 15th-century building on the site to create a two-storey house in classical style with an imposing east elevation of nine bays, with a porticoed entrance. Grinling Gibbons is thought to have done some of the wood carving for the opulent interiors, and the interiors show traces of lovely 18th-century plasterwork by Artari and Varsalli.

John Arkwright, a descendant of the famous industrialist Richard Arkwright, purchased the hall, but the Arkwright family fell upon hard times and sold the Hal in 1919. The interior furnishings were sold off as architectural salvage, leaving the Hall an empty shell.

In 1946 the Hall was in danger of being pulled down when writer Sir Osbert Sitwell stepped in. He purchased the Hall to save it from destruction, and in 1970 his descendants persuaded the government to take it over. The Hall is now cared for by English Heritage. 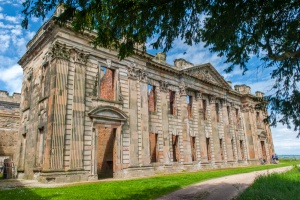 The original interiors of the Hall are not completely lost to history, however. When the house was dismantled some of the rooms were carefully removed and shipped to the U.S., where they can be seen in the Philadelphia Museum of Art. Newspaper publisher William Randolph Hearst bought an entire pine-panelled room, and later sold it to a Hollywood film producer, who used it for the 1934 film 'Kitty'. The room is now displayed at the Huntington Library in California.

The house has been roofless since 1919, but the exterior and many of the interior walls still stand to their full height.

Sutton Scarsdale Hall is surrounded by contemporary listed walled gardens and a ha-ha, as well as a 17th century building known as the Old Priory, formerly a bakehouse for the Hall.

Approaching the hall by a narrow lane guarded by trees you have no notion of what awaits. Even when you pull into the shaded parking area in front of the empty shell you do not truly realise the sheer grandeur of the house. It is only when you walk around to the far side of the Hall, where fields fall away down a long slope, that you begin to appreciate just how imposing this empty shell of a house must have been. This east facade is a symphony of neo-classical design, with gigantic Corinthian columns decorated with exuberant Baroque detail.

Some sections of the house are barred off for safety reasons, but you can still see everything through open windows, including the spectacular plasterwork adorning the walls and chimney pieces with wonderfully carved figures. This is truly outstanding, and gives a glimpse of how beautifully the original interiors were. I found Sutton Scardsale an absolute delight. There are no stately rooms filled with fine furniture here, just an empty shell of a house, but what a shell, and what a house it must have been! 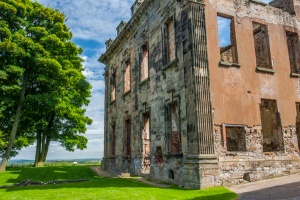 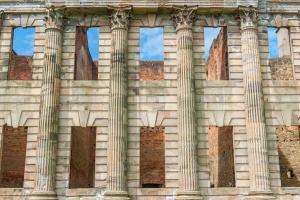 Corinthian columns on the west front 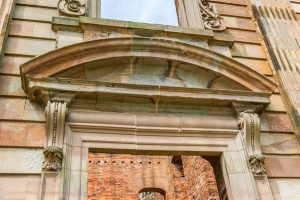 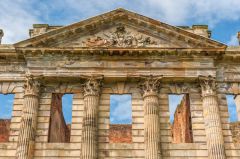 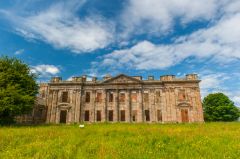