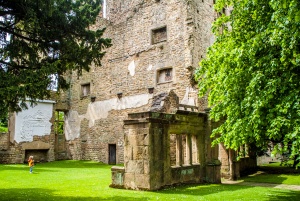 Hardwick Old Hall is a ruinous 16th-century manor in the grounds of Hardwick Hall, Bess of Hardwick's monumental Elizabethan home.

Bess of Hardwick was born in the Old Hall, and when she separated from her third husband, the Earl of Shewsbury, in 1584, she returned to her childhood home. She began to expand the house, at the same time as she was planning to build the much grander 'new' Hall a short distance away. Perhaps she was driven by the tale of a fortune-teller, who prophecied that she would never die so long as she was building.

The Hall was a mish-mash of odd wings and state rooms added bit by bit. Part of the house was set aside for use by her son, William Cavendish, and his household. Each household had its own great hall, set on the third floor, approached via a grand staircase.

The size and scale of these private apartments is staggering; on a par with royal palaces of the day. Bess's hall was known as the Forest Chamber, with a plaster panel depicting Bess as a deer in the woods. The counterpart to the Forest Great Chamber is the Hill Great Chamber, with an exquisitely carved overmantle in the form of a relief showing the mythical giants Gog and Magog.

The entrance leads to a Great Hall, with family quarters to one side and service rooms to the other. Combined with Bess and her own sizeable household, the Old Hall had to provide living space for 200 people.

Even after the new hall was complete, the Old Hall was maintained; the new, showpiece hall was meant for entertaining and making a 'statement', while the old hall was for actually living in relative comfort. 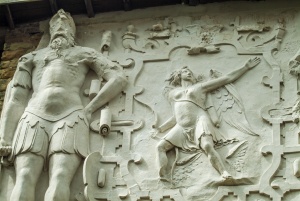 Gog and Magog panel in
the Hill Great Chamber

The end for Hardwick Old Hall came when the Cavendish family built Chatsworth House. Chatsworth became the family seat, so the hall was no longer needed. Stone was removed for building supplies, and the hall was left to decay. In 1959 what remained was accepted by the government in lieu of death duties, and the house has been cared for by English Heritage ever since.

In contrast to the "New" Hall, completed in 1597, the Old Hall at Hardwick is in a state of partial ruin, though visitors can climb to the upper floor for excellent views over the surrounding countryside and across to the new Hardwick Hall.

Visitors can listen to the "Bess of Hardwick Story" audio tour

It is easy to overlook the Old Hall in favour of the overwhelming grandeur of the new Hall, but for me, the Old Hall is somehow more appealing. It seems very much more a family home; albeit a dysfunctional family. The plasterwork panels are utterly superb; one can only wonder what the original house must have looked like before it was allowed to fall into ruin. 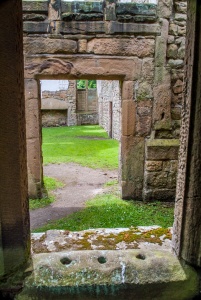 Looking through
a ruined window 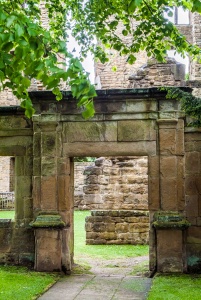 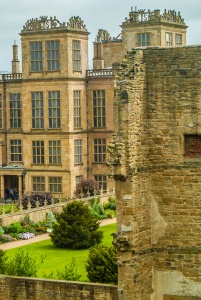 Hardwick Hall from the
top of the Old Hall 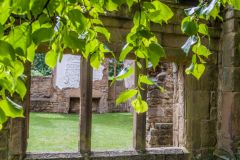 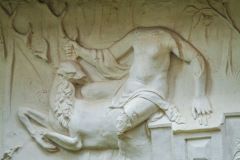 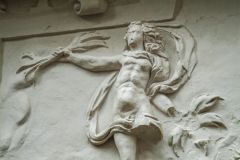 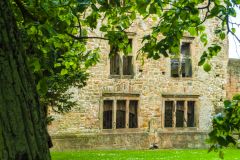 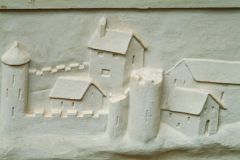