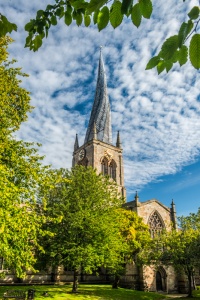 St Mary and All Saints church

Chesterfield's parish church of St Mary and All Saints is the largest in Derbyshire. Begun in the late 13th century, the church was completed around 1360 and features a mix of Early English, Decorated, and Perpendicular Gothic style.

So why did the spire twist so markedly?

The answer lies in the lead tiles used to cover the spire's timbers. Over 32 tonnes of lead tiles created such a heavy weight that the timbers simply couldn't bear the strain, and twisted alarmingly. An additional reason is that the builders didn't use a cross-brace to compensate for the weight of the tiles. 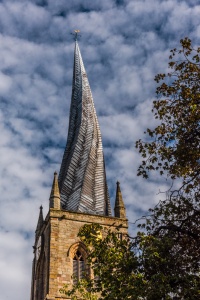 That seems a pretty basic error, so why would they have left out a cross-brace? It is possible that the spire was built during the period when the Black Death devastated England, between 1348-1350. The spire may have been started by experienced workmen, who then died in the Plague, so the work had to be finished by inexperienced men, who simply didn't know enough to put in braces.

Other, less practical reasons have been given out for the crooked spire. One old story says that the Devil was resting on the spire, his tail wrapped around it for support. The smell of incense from inside the church made him sneeze, and the violence of the sneeze caused the spire to twist.

Two old tales are nothing short of slanderous towards Chesterfield's population. One says that the spire twisted on its own when a virgin was married in the church, and it will untwist when a second one does.

A second version combines the Devil and the inhabitants of Chesterfield; according to this story the Devil was resting on the spire, and when he realised that the bride (or groom!) entering the church was a virgin he twisted around in surprise, pulling the spire with him. While you are standing in the churchyard gazing at the crooked spire, look for an old 1924 gas lamp, which once illuminated the nearby market place. 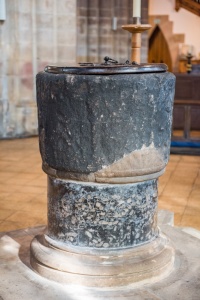 Inside the church you find yourself passing under a massive west gallery to reach the light, spacious nave. There are north and south aisles and transepts, and the chancel with 4 guild chapels surrounding it. Though much of the interior dates to the 14th century, it was comprehensively rebuilt in 1843 by Sir George Gilbert Scott, and again in 1896 by Temple Moore who installed the striking reredos behind the high altar.

Historic features include the Jacobean pulpit, a Norman font, and a late 15th-century wooden screen in the south transept. Look for a window on the south aisle wall depicting scenes from the history of Chesterfield. Also in the south aisle is a medieval tomb niche with the effigy of an unknown woman, her hands clasped in prayer.

In the south transept is a parish chest, bound by iron straps, created around 1600. Also in the transept is a beautiful 17th century long case clock, its case embellished with detailed carvings including a Crucifixion scene, foliage, and, appropriately for a clock, the figure of a cockerel.

In the north transept is part of an original 1475 rood screen.

On the north side of the churchyard is the grave of Francois Raingeard, a French officer during the Napoleonic Wars. Raingeard was held prisoner in Chesterfield, and died before the war ended. He was buried in St Mary's churchyard, under a gravestone inscribed in English, French, and Latin.

St Mary's is a wonderful historic church, full of interest even without the famous spire. 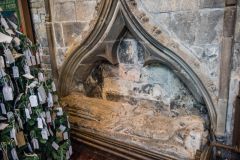 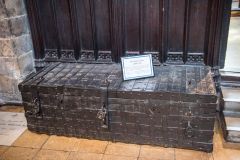 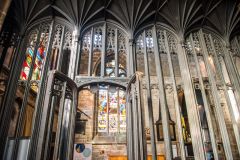 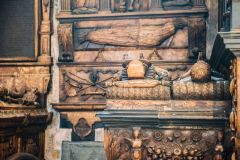 Self Catering near Chesterfield