HERITAGE HIGHLIGHTS:   One of the best-preserved timber-framed buildings in Worcester 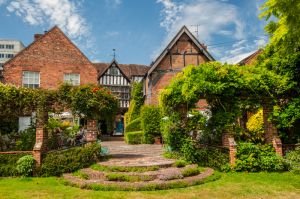 Greyfriars is a beautiful timber-framed building built for a successful local merchant around 1480. It features superb panelled rooms furnished with tapestries and period furniture. Behind the house is a lovely walled garden with wonderful colour in spring and autumn.

Greyfriars was scheduled to be destroyed following World War II, but it was rescued from demolition and restored to and refurbished to provide a wonderful glimpse into the world of a 15th-century merchant and his family.

You might reasonably assume that Greyfriars had some link to the Franciscan order, but you'd be wrong. Like Friar Street itself, the building takes its name from the medieval friary that stood nearby, but has no actual monastic link, though some historians have suggested that it served as the friary guest house.

The house was built for Thomas Grene (Green), a brewer and High Bailiff of Worcester. The north wing was extended in the Tudor period and a large Jacobean staircase inserted in the early 17th century for Francis Street. The Worcester Corporation granted a lease to the Streets in 1603 and the family lived there for generations. One of the family was Sir Thomas Street, a barrister, Town Clerk, and MP for Worcester. In the 1870s the house was converted into several shops facing onto Friar Street. 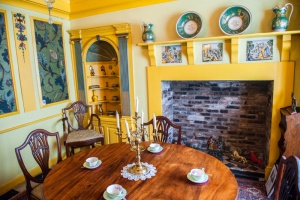 Greyfriars, as we see it today, is really the work of two people; the brother and sister team of Malcolm and Elsie Matley Moore, who offered to take over the restoration of the house on the condition that they were allowed to live in it.

The Matley Moores were avid collectors of historic furniture and fittings, and they snapped up bits and pieces from historic buildings wherever they could find them; from car boot sales to antique fairs, they searched the country for pieces of furniture and memorabilia that would fit the period feel of the house.

The chequered floor in the ground floor hall comes from Wychbold Hall near Droitwich, rescued when the house had to be pulled down due to subsidence from salt mines underground. Rumour has it that some of the Gunpowder Plot conspirators fled to Wychbold after the failure of Guy Fawke's attempt to blow up Parliament in 1605, so they probably would have walked upon the same stones that visitors to Greyfriars now tread.

One of the most extraordinary pieces of furniture is a screen made of 17th-century Spanish leather. According to our guide, the leather was found in a skip in the 1930s and made into a screen as well as a chest cover. It is amazing to think that someone would throw away such a lovely piece of craftsmanship, but thankfully the Matley Moores rescued it. 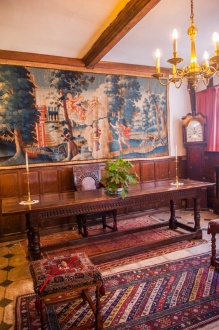 Depending on the time of day you can explore Greyrioars by guided tour or on your own. I opted for a guided tour to get the most out of my experience. Our tour guide was exceptionally knowledgeable and friendly, and really helped the history of Greyfriars and its people come alive.

One of the highlights for me was seeing the 'before and after' photos of the back garden area laid out in a first-floor chamber. It is extraordinary to think that there were as many as 10 townhouses crammed into what is now the garden, with two outdoor privies serving all the residents. The old photos also showed what Greyfriars was like before it was restored, with rotten timbers and gaps in the roof. It's quite a transformation from that decrepit building to the cosy timber-framed one we see today.

The tour is brief, taking in the hall and yellow dining room on the ground floor, and the upstairs hall, library, and bedroom. It is remarkable to think that none of the furniture was original to Greyfriars, for it all seems to 'fit', including a lovely four poster bed in the first-floor bedroom. Perhaps the most intriguing room is the smallest; a Georgian style dining room on the ground floor, painted in vivid yellow accented with green. It is unlike any other room in the house and entering the chamber is like leaping forward 300 years from the nearby hall.

Greyfriars is a delight, and after you've finished touring the interiors you can explore the attractive gardens and enjoy a cup of tea from the tea shop that shares the space with the National Trust.

Greyfriars is very well signposted from nearby streets, and is only a few steps from the Tudor House Heritage Museum. 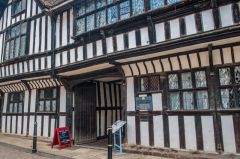 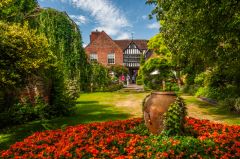 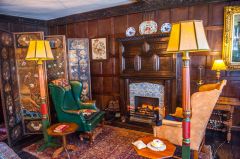 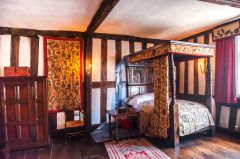 Nearest Accommodation to The Greyfriars:

More self catering near The Greyfriars >>

More Hotels near The Greyfriars >>

More bed and breakfasts near The Greyfriars >> 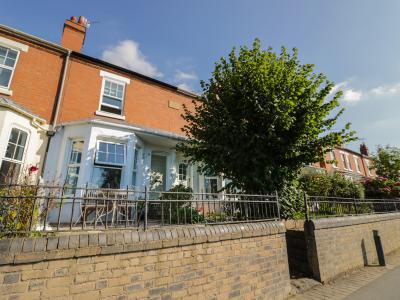