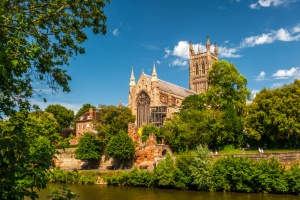 The Three Choirs Festival is billed as the oldest music festival in Europe, a claim which may be difficult to back up, but which underscores the festival's long and proud history.

There is some suggestion that the festival was being held prior to 1709, but certainly by the 1720s it seems that regular meetings for music were being held involving the choirs of Hereford, Worcester, and Gloucester Cathedrals.

The early festivals lasted two days and featured strictly ecclesiastical music. According to the attitudes of the time, even oratorios, such as Handel's Messiah, were considered secular.

It was not until 1759, the year of Handel's death, that his Messiah was first performed in an English cathedral, when it was heard as part of the Three Choirs Festival being held at Hereford Cathedral.

The festival was expanded to three days by the mid-1700s. Those early events consisted of sacred music in the cathedral and then evening concerts of secular music held at other venues in the town. The choristers and lay clerks performed in the cathedral, while the secular evening works were performed by the clerks alone.

Throughout the Victorian era, and particularly after the advent of railroads made transportation easier, crowds flocked to the festivals. Over the years the cathedral clergy have occasionally voiced their displeasure at the irreligious nature of the festival and on one famous occasion, the Dean of Hereford Cathedral hid the key to the choir to attempt to prevent a performance. In 1875 the cathedral of Worcester refused permission to hold the festival there because it did not meet their idea of worship.

To counteract this opposition the city government of Hereford, Gloucester, and Worcester began a practice of proceeding in state to the opening of the festival. Over the years the emphasis has shifted from firmly established traditional favourites to include a mix of standard works and new music, though oratorios remain a musical staple.

Though at one time the festival choirs welcomed singers from across Europe, membership is now limited to inhabitants of the three counties (i.e. Worcestershire, Herefordshire, and Gloucestershire).

The festival is usually held in mid to late August.