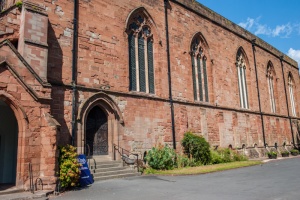 King's School has its roots firmly set in Saxon England. In 680 the see of Worcester was created by the monks of Whitby, under the protection of the powerful kings of Mercia. The monks of Worcester provided education to their own members and outsiders.

The monastery site was fortified under King Alfred, and Alfred's defences were later replaced by a Norman castle. The remains of the castle are within the school grounds.

The school declined in the turmoil of the 9th century. Viking raiders travelled up the Severn, causing the monks to scatter and flee for their lives. In the relative peace following the Viking period, monasticism flourished and the Benedictine order, in particular, maintained a strong focus on teaching. Under Saints Dunstan and Oswald, both of whom were Bishops of Worcester, the monastery and school continued to grow.

The monastery continued to focus on education, and under Wulfstan (early 11th century) it expanded from 12 to 50 monks. Wulfstan, in particular, invited the lay public to enter the monastery to receive an education - and religious instruction. Monks who had finished instruction at the monastic school might choose to go on to University.

A second school at Worcester began about 1341 in the Almonry building. It seems likely that this school was focussed on teaching poor lay students.

The priory of Worcester was disbanded in 1540 as part of the Dissolution of the Monasteries. However, the dissolution was fraught with difficulties, for while the monastery itself was no longer needed, the Bishop of Worcester needed the Cathedral as his seat. The lands taken from Worcester Priory were allocated to the Dean and Chapter (i.e. the administration) of the Cathedral. Many of the monks actually maintained their influence by becoming Canons of the Cathedral.

Though the monastery school was disbanded with the priory, a new Cathedral College was established in 1541, containing within it a new King's School. The first headmaster of the school was appointed by Henry VIII himself. Originally all students were supported at the school's expense, but later paying students were added to the mix.

Students were taught in the 12th century College Hall, the former monastic refectory (dining hall). At 124 feet in length College Hall is the second-longest surviving refectory in England, trailing only Westminster Hall. The interior of the hall boasts superb medieval carving, particularly a large sculpture on the eastern wall depicting Christ in Majesty.

College Hall saw its share of drama over the years; after the Battle of Worcester in 1651 the hall was used as a hospital by Scottish troops fighting for the royalist cause. Worcester city council later paid for "rosin and pitch" to perfume the hall after the Scots had left!

Changes over the years eventually allowed girls to enter King's, and the school only recently became a non-boarding institution.

The School is not generally open to tourists. Try contacting the school administration at